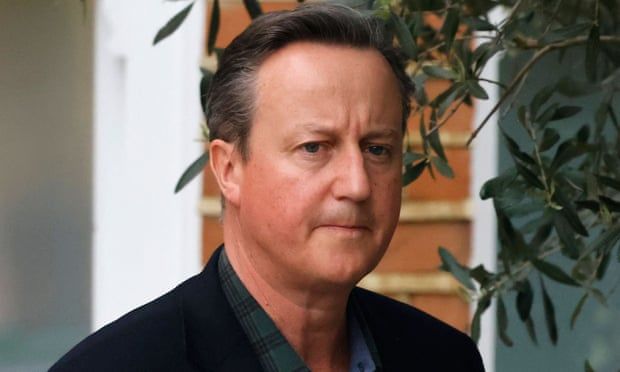 David Cameron said to have made about $10m from Greensill Capital

BBC Panorama says it has obtained documents showing ex-PM received sum partly from cashing in shares
David Cameron made about $10m (£7m) from Greensill Capital before the finance firm he lobbied on behalf of collapsed, according to the BBC.

Panorama said it had obtained documents showing the former prime minister received the sum from cashing in shares he held in the company worth $4.5m (about £3.3m) in 2019, in addition to an annual salary of $1m (£720,000).

His spokesperson said he did not “receive anything like the figures quoted” and insisted what he was paid was a “private matter”.

It is the first time a number has been put on how much Cameron made, after he told a government-commissioned inquiry set up to investigate his dealings with senior politicians and Whitehall officials that he was paid “a good amount of money”.

The review, chaired by Nigel Boardman, cleared him of breaking any rules but said Cameron “understated” the nature of his relationship with Lex Greensill when pressing for the Australian financier’s company to get the largest possible allocation of government-backed loans under the Covid corporate financing facility.

Cameron’s spokesperson said he “acted in good faith at all times” and there was “no wrongdoing in any of the actions he took”, adding he had “no idea” until December 2020 that Greensill was in danger of failing.

They said he lobbied the government “not just because he thought it would benefit the company, but because he sincerely believed there would be a material benefit for UK businesses at a challenging time”.

The spokesperson added Panorama’s report tried to “define a role for Cameron at Greensill that is totally at odds with the facts” and that he was a part-time adviser to the company with no executive or board responsibilities.

She said: “It’s created a wild west where the Conservatives think it’s one rule for them and another for everyone else. The system causes more harm than good by giving a veil of legitimacy to the rampant cronyism, sleaze and dodgy lobbying that is polluting our democracy under Boris Johnson and the Conservatives.”

Labour would ban former prime ministers from ever taking on lobbying jobs once they leave office and create an integrity and ethics commission to “stamp out sleaze”, Rayner added.

Cameron’s dealings with Greensill first came under scrutiny earlier this year, when he was revealed to have directly lobbied senior Whitehall officials and the chancellor, Rishi Sunak.

Greensill collapsed earlier this year, but before it did Cameron sent emails and texts to high-ranking politicians and civil servants and also took Lex Greensill to a “private drink” with Matt Hancock, the health secretary.

So embedded was Lex Greensill in the government, he had even been given a No 10 business card calling him a “senior adviser” during Cameron’s tenure in Downing Street.

The government’s chief commercial officer, Bill Crothers, began working as an adviser to Greensill Capital in 2015 – while still employed in the civil service. Remarkably, he was given official approval to do this.

In the Boardman review published last month, Greensill was found to have been given “extraordinarily privileged” access to Downing Street. But the finger of blame was partly pointed at the late cabinet secretary, Jeremy Heywood.

But critics said Boardman should not have been in charge of the inquiry because of his close relationship with the government and the Conservative party. He had been a non-executive director at the Department for Business, Energy and Industrial Strategy and was a former Tory party candidate.

In April, Cameron accepted that he should have communicated with the government “through only the most formal of channels” rather than text messages to Sunak.

When the final report was published that found Cameron “did not breach the current lobbying rules and his actions were not unlawful”, the former Tory leader said: “I have said all along that there are lessons to be learned, and I agree on the need for more formal lines of communication.”
#Covid  #Boris Johnson  #Johnson
Add Comment