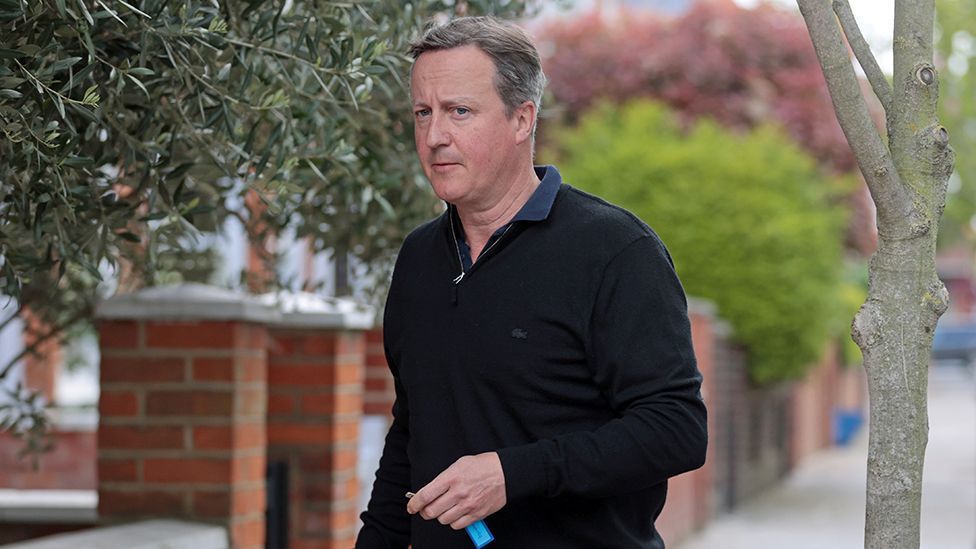 BBC Panorama discovered Mr Cameron appeared with the company's founder, Lex Greensill, at an event hosted by the Swiss bank Credit Suisse in 2019.

The collapse of Greensill in March has left the bank's clients facing billions of dollars in losses.

Mr Cameron says there was no wrongdoing in any of the actions he took.

He added he had made himself "available to parliamentary scrutiny", which was "the right thing to do".

Mr Cameron worked for the company as a part-time adviser for two-and-a-half years after stepping down as prime minister.

Panorama has also discovered documents indicating his role earned him about $10m before tax.

Mr Cameron's spokesman has said his remuneration was a private matter.

The June event Mr Cameron attended was called "The Future of Supply Chain Finance", and the audience were wealthy Credit Suisse clients.

Credit Suisse was marketing and selling Greensill investments at the time, and the bank told investors they were low risk.

Investors thought their money was being loaned to companies that were awaiting payment for goods and services they had sold.

The loans were supposed to be backed up by unpaid invoices, but earlier this year it was revealed that some of the invoices simply did not exist.

US court papers show how between 2018 and 2021, Greensill lent $850m of investors' cash to a US coal company called Bluestone Resources.

Only $70m of that money was secured against real invoices for coal that Bluestone had actually sold.

Investors did not know it, but the remaining $780m was only backed by predicted coal sales that may or may not happen in the future.

Lex Greensill told Panorama that this type of financing was commonplace in the financial services industry.

He said the predicted Bluestone business was all "based upon future trade that is likely to occur with current customers".

Panorama discovered that was not true.

The programme obtained the names of the companies that Lex Greensill said were current customers of Bluestone.

Six of the companies said they were not Bluestone customers and they weren't planning to buy its coal in the future.

Lex Greensill later told Panorama the coal buyers did not have to be current customers. Bluestone only had to state it expected to make the sales at some future point and Greensill was not obliged to make checks, he said.

Mr Greensill denied misleading investors. He said his company made all the appropriate disclosures to Credit Suisse and the Swiss Bank was "solely responsible for making any disclosures to their investors".

He said the loans were always secured against assets and personal guarantees, and were backed up by insurance that would pay 100% of any shortfall.

Credit Suisse says its focus is on returning cash to investors and that 59% has been returned so far.

Mr Cameron's spokesman told Panorama he was neither a director of Greensill, nor involved in any lending decisions, and that he had no special insight into what ultimately happened.

The spokesman said: "It is also preposterous to suggest that he would work for any company if he was aware that it was behaving improperly, or was in any way seeking to mislead investors."