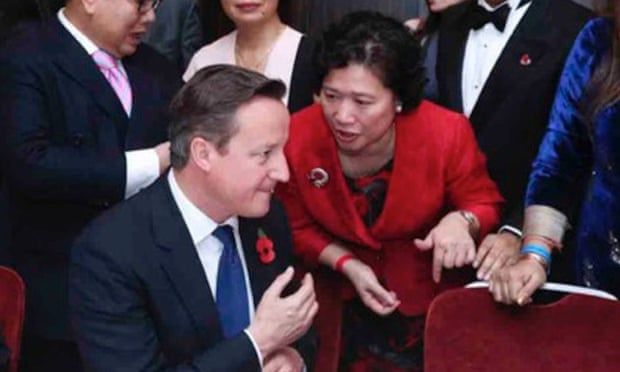 A comprehensive review is to be held into how a suspected Chinese agent was able to get so close to senior British politicians, the security minister, Damian Hinds, has said.

MI5, the domestic intelligence agency, on Thursday took the unusual step of circulating a warning to MPs accusing Christine Lee – a prominent London-based solicitor – of being engaged in “political interference activities” on behalf of China’s ruling communist regime.

The Chinese embassy rejected the claims, accusing the authorities of “smearing and intimidation” against the Chinese community in the UK, while a Chinese foreign ministry spokesperson said the British were “too obsessed with James Bond 007 movies”.

However, Hinds said the security services had been aware of Lee’s activities – including channelling funds to British politicians in an attempt to secure influence – for “some time”. The Times had reported on her activities in 2017, including her extensive payments to the office of Barry Gardiner then the shadow energy minister.

It is not clear what prompted M15 to make its surprise statement on Thursday, but, asked about the scale of Chinese influence in the UK, Hinds said on Friday: “We’re learning all the time, all the implications, of course, have to be able to be taken into account.”

Much of Hinds’s broadcast round was diverted to questions about further revelations of Downing Street parties, dashing any hopes in government circles that MI5’s warning might draw the media to a new subject.

Nevertheless Conservative MPs tried to make political capital out of the revelations, suggesting both Labour and the Liberal Democrats’ approach to Chinese investment in the Hinkley Point C nuclear plant, sealed in 2015, may have been influenced by the Chinese. In reality, Gardiner is on the record saying Hinkley was not essential to UK energy needs.

The Conservative MP Marcus Fysh claimed: “Chinese government spy agencies have been massively funding frontline Labour and Liberal Democrat political operations in the UK. Energy policy directed by Ed Davey the Liberal Democrat leader and supported by Barry Gardiner has greatly favoured China and this needs to be addressed.”

The trade minister Greg Hands said: “This is extremely concerning. I was trade minister. Barry Gardiner was our Labour shadow, and we used to brief him confidentially on complex and sensitive international trade negotiations which certainly would have been of interest to the Chinese government.”

Davey’s Kingston constituency party received £5,000 from the Chinese in February 2013 when he was energy secretary. Sir Michael Rake, a member of the board of Huawei UK, also donated £5,000 to Davey in 2020.

Gardiner received more than £500,000 from Christine Lee over six years to cover staffing costs in his office as well as employing her son as his diary manager. The son quit his job on Thursday in the wake of the revelations.

Lee also received an award from Theresa May when she was prime minister, for her work on a project promoting good relations between the Chinese and British communities in the UK, and was a VIP guest when David Cameron hosted President Xi Jinping in London. Her connections with the Chinese embassy were widely known.

Gardiner said he had liaised with the security services for many years regarding his contacts with Lee but had only learned on Thursday that she had been engaged in “illegal activity”.

Gardiner had been a supporter of the Chinese investment in UK nuclear power plants, but the current Labour frontbench opposes the potential investment even more than the government.

Tim Loughton, one of the four MPs subject to Chinese sanctions said it was “deeply worrying that agents of the Chinese Communist party have been given access to the mother of parliaments and funding the offices of selected politicians. We urgently need an exhaustive audit of where they have bought influence or inveigled their way into virtually every aspect of the U.K. and can then take appropriate measures to roll back that influence.”

It is unlikely that Lee will face charges, since the home secretary, Priti Patel, has said her activities fell below the criminal threshold.

The Electoral Commission will be asked to investigate whether these donations breached electoral law since they had in reality come from a foreign power, and not a British citizen.

In Beijing, the foreign ministry spokesperson Wang Wenbin dismissed the claims, accusing the UK government of making “groundless allegations and hyping the China threat” to serve its own purposes.

“It is highly irresponsible to make sensational remarks based on hearsay evidence and certain individual’s conjecture,” he said.

The Chinese ambassador was asked for an explanation when he met UK diplomats at the Foreign Office in what is being described as a routine meeting.

News of the alert became known when the Conservative MP Iain Duncan Smith, a frequent critic of China, revealed the Commons Speaker had written to MPs about the MI5 warning.