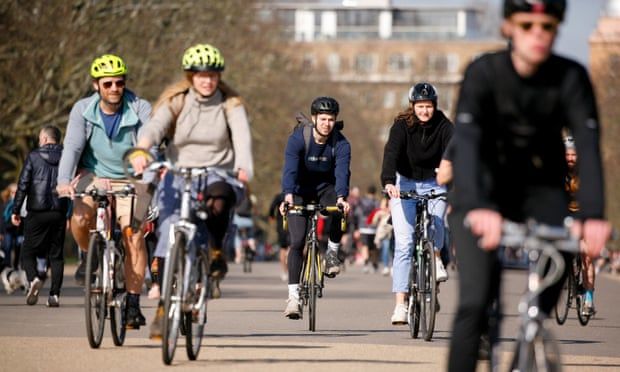 Retailers report customers snapping up all available stocks with bike sales up over 40% on last year
Bike retailers and manufacturers are struggling to keep up with demand as the cycling boom kicked off by the pandemic rolls into 2021, with customers falling on available stock “like piranhas”, according to one big retailer.

UK bicycle sellers said stock was being snapped up within days of arriving at ports even before the market hits its peak selling season, which usually begins at Easter.

“The cycle market has gone berserk,” said Peter Lazarus, the head of cycling at sports retailer Decathlon in the UK, who added that container loads of bikes were selling out within days as shoppers were setting up online alerts for the items they wanted. “The minute you get stock in they are like piranhas on a fish. Demand is huge,” he said.

In the UK, sales of bicycles, including accessories, services and components, were up by 41% in January, compared with a year before, a similar pace of growth to the 45% recorded in 2020 as a whole according to the Bicycle Association.

Cycle servicing rose by a similar amount as families dragged old sets of wheels out of the shed and garage or refurbished secondhand purchases as new bikes proved hard to find.

Electric bikes and sporty road bikes are currently selling particularly well at Decathlon, up 170% and 65%, respectively, in the first part of this year, but sales of hybrids and commuter bikes are already ahead of 2020.

In the UK, deliveries are also being held up by a worldwide shortage of shipping containers, which is causing hold-ups and price increases when transporting goods, as well as issues at British ports caused by Brexit and changes in working practices as a result of the Covid-19 pandemic.

But concerns about using public transport during the pandemic and a big step up in investment in cycling infrastructure in cities around the world – from Paris and Berlin to Manchester, Seoul, Vancouver and London – have fuelled an unexpected surge in demand for bikes around the world.

Bike manufacturers and parts suppliers said they were scaling up production but were still unable to meet retailers’ requirements.

There is a particular pinch point in supplies of gear and brake sets from Shimano, by far the world’s biggest component maker. The Japanese firm admitted that lead times are longer than usual because of unexpected demand. It is stepping up production and expecting sales of bike parts to soar 22% this year.

Dominic Langan, the chief executive of major UK bike and bike parts distributor Madison and Sportline, said the global increase in demand was making it “challenging for manufacturers to react whilst they too are trying to operate in a pandemic and all the associated restrictions”.

He said the problem was exacerbated because makers were fearful of investing to increase production when future demand was so uncertain.

“We do not know how long the demand will last for which is why many producers are reluctant to invest more in machinery and production capacity if they don’t expect this level of demand to continue indefinitely,” he said.

Will Butler-Adams, the chief executive of British folding bicycle maker Brompton Bicycle, said he was “extraordinarily confident” that the company would not be able to keep up with global demand this year. He said unit sales were up 22% in 2020 but could have doubled if the company had been able to meet client’s full requirements. “We are not giving anybody enough bikes,” he said.

The company took on 150 extra staff last year, taking its total to 600 worldwide, and expects to do the same this year as it tries to expand production and marketing.

Butler-Adams said he was dealing with potential hold ups on various bike parts – from saddles to brake levers - almost every week.

While Brompton makes its frames in the UK, the company has had to seek out new suppliers and place orders for some components two years in advance to secure sufficient supply in a highly competitive market.

Butler-Adams said buying gear so far in advance was risky but he believed the pandemic had spurred a permanent change in the market.

“There is a change in how people move in cities. It is the beginning of the journey not a blip,” he said.
#COVID-19  #Covid
Add Comment