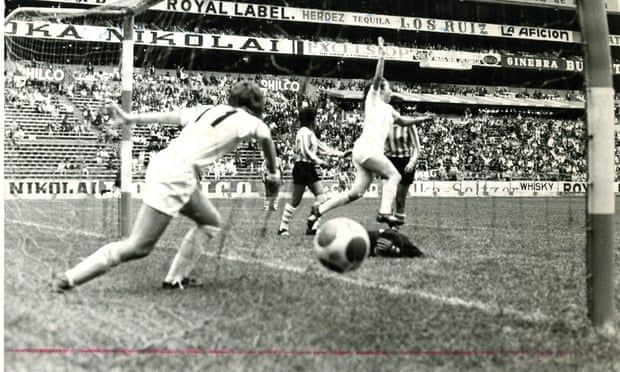 Curator of football exhibition says women must be represented

Eleanor Watson, the curator of Football: Designing the Beautiful Game, called for “a concerted effort on all sides” to address the historical imbalance in football history, which is hugely tipped in favour of men.

“It has to come from a genuine desire to change things, not to just have something tokenistic, such as: in every Top 10 [players] list we have to include something about one woman,” she said.

Watson said an effort needed to be made to engage with British players from the 1970s, some of whom have not been interviewed, about their experiences. “It’s taking the time to approach some of these players from different eras to uncover their stories. They competed internationally and they’re still alive – it is an opportunity that still remains open,” she added.

During her research for the show, Watson stumbled upon images from the 1971 Women’s World Cup, which was held in Mexico and featured the British Independent Ladies, the unofficial British women’s team. Despite the tournament being a success, Watson describes the “crazy moment for the team who played at the Aztec Stadium in front of 100,000 people and then came home to the UK and no one greeted them at the airport. No one. None of it had been covered.”

The plan for the exhibition was to have 50/50 male and female representation, but the Football Association’s 50-year ban on women playing football, which started in the UK in 1921 and lasted until the 70s, made that impossible. “The answer isn’t obviously just one exhibition,” she added. “The reality is that there’s so many other things that need to happen before we reach that 50/50 representation.”

The exhibition, which took two years to assemble and includes loaned items from the National Football Museum in Manchester, is a sprawling look at the impact design has had on football and vice versa.

Items include a woman’s football kit from 1895, Nike’s first boot designed specifically for women, as well as banners made by Liverpool fan and “craftivist” Peter Carney and a pair of George Best’s boots that he wrote on to keep track of his goal record.

There is also a section on stadium design, including the Zaha Hadid “eco-stadium” for Forest Green Rovers and the Estádio Municipal de Braga in Portugal, which is carved into the side of a cliff and won the Pritzker Architecture Prize.

As well as high-end design and boots by huge manufacturers such as Adidas, there are fan-crafted items including a two-volume collage scrapbook dedicated to the Preston North End player Sir Tom Finney. “They’re absolutely incredible because this person has gone through collecting reams and reams of articles about him and cut out all of these pictures of him and then painted in his shirt – they’re like bonkers collages,” Watson added.

The exhibition comes at a time when the women’s game is more popular than ever. In March, 91,553 people came to the Camp Nou to witness Barcelona beat Real Madrid – the biggest ever attendance for a women’s football match. The BBC is showing Women’s Super League games on terrestrial television, while the upcoming Euro 2022 championship is expected to break more attendance records.
Add Comment