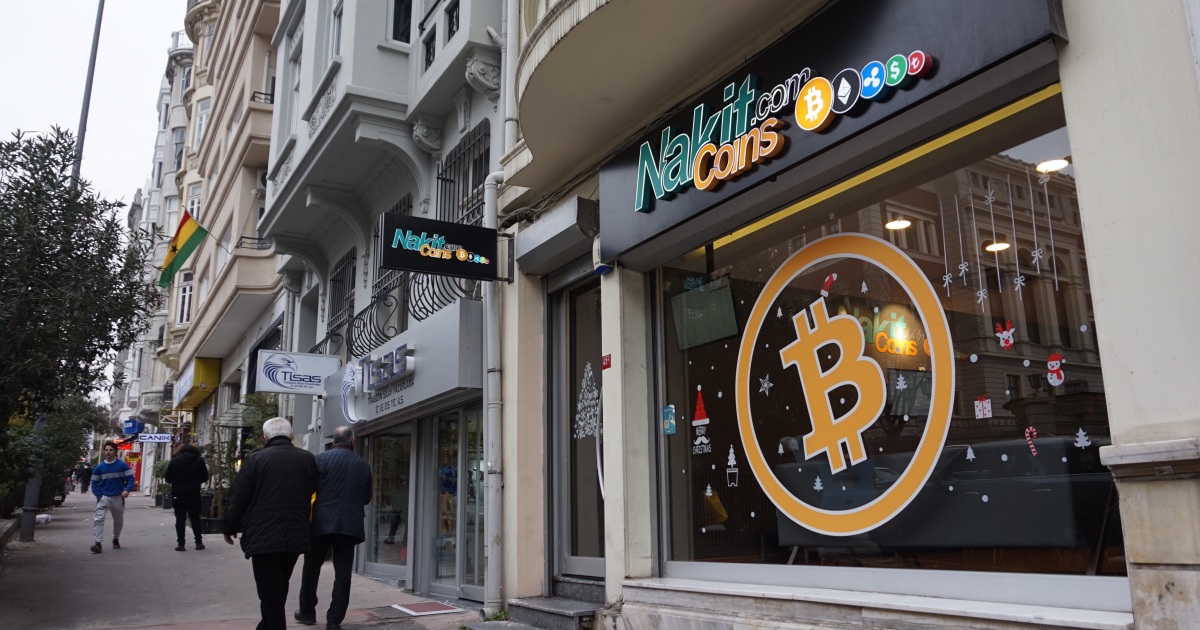 Cryptomania is alive and well in Turkey, thanks to lira woes

Despite a government crackdown and high-profile exchange collapses last year, Turks are flocking to crypto as a hedge against lira distress.

Just off of Istiklal street, Istanbul’s busiest pedestrian walkway, the occasional passerby stops to glance at a screen displaying the prices of cryptocurrencies in the window at NakitCoins.

Only a handful of people enter the shop, but the brick-and-mortar exchange, which lets them buy or sell Bitcoin and other cryptocurrencies, is a physical example of how the ailing Turkish lira is propelling the popularity of virtual cryptocurrencies in Turkey, despite a recent history of scandalised exchanges.

Interest in crypto among Turks, like the rest of the world, has increased over the years. But Turkey’s economic crisis has pushed millions of curious observers to actually sink their savings into Bitcoin, Ethereum and other coins. The new converts aren’t simply drawn to the investment promise of cryptocurrencies, which are prone to wild, volatile price swings. They see virtual currencies as a potential store of value to shield their savings as the lira is roiled by routs that saw the Turkish currency lose more than 40 percent of its value last year alone.

The growing appetite for crypto is the latest manifestation of the Turkish public’s search for reliable investments, said Cem Yilmaz, who founded NakitCoins in 2018 and has now opened three branches in the country.

“Turkish people are very interested in investing, it could be forex [foreign exchange], or gold, or now crypto,” he said.

Yilmaz launched NakitCoins to help the crypto-curious overcome their apprehensions about sinking their money into a new virtual investment vehicle via exchanges that only exist in the ether.

“We already had numerous online exchanges in Turkey, so we thought ‘Why not have something physical, where people can come and ask questions and put a face to crypto, instead of just going online?'” he said.

Most of NakitCoins customers today are foreigners, Yilmaz said, because current regulation in Turkey makes it difficult to operate with cash in Turkish lira directly. But he and other players in the country’s crypto sector are hoping new legislation in the works will allow them to operate more directly.

Daily transactions in crypto in Turkey had topped one million in March last year, according to Chainalysis and Kaiko data seen by Reuters news agency.

The surge came after the lira was roiled in the wake of President Recep Tayyip Erdogan’s surprise sacking of the country’s central bank chief that same month. Volumes started tapering off in April, however, after the central bank announced it was banning the use of cryptocurrencies for payment. Then in late April, two Turkish cryptocurrency exchanges – Thodex and Vebitcoin – collapsed, wiping out the holdings of hundreds of thousands of users.

But cryptomania powered back in the final months of last year, with trading volumes topping one million per day, after a series of central bank interest-rate cuts in the face of soaring inflation saw the lira’s value crash.

Billboards and television spots increasingly advertise ways for the public to enter the crypto market, and on most television channels, up-to-date values of Bitcoin are listed alongside the United States dollar and the euro.

Turan Sert, an adviser for Paribu, Turkey’s largest online crypto exchange, said the heightened awareness underscores how crypto is increasingly replacing foreign currency or traditional stores of value like gold as a hedge against a local currency whose value is clouded by uncertainty.

“In the past it was dollarization, meaning in order to avoid fluctuations in their currency people kept their assets in dollars,” he told Al Jazeera. “Now the recent trend is being called cryptolization.”

Paribu, which allows Turks to use their bank accounts to buy and sell crypto in Turkish lira, has seen its user base grow from around 1.5 million at the open of 2021 to 5 million by year’s end, while average daily trading volume swelled from $20m a day in 2020 to more than $500m by the end of 2021.

The exact number of investors in Turkey holding crypto is difficult to estimate because not all exchanges have made their data public. But Sert says experts have estimated it is somewhere between 10 and 11 million people.

“If crypto people in Turkey made their own political party, they would be the third-largest party in parliament,” said Sima Baktas, a lawyer specialising in cryptocurrencies and co-founder of CryptoWomen Turkey, a non-profit that holds crypto seminars and workshops to educate the public.

Baktas, who estimates at least 14 million people out of Turkey’s population of 84 million hold cryptocurrencies today, said the increasingly popular trend is being driven by a young population that is both familiar with the online world and eager to find a way to protect their savings against lira depreciation.

“It wasn’t hard to adapt to the crypto sector, because we already had such big potential,” she said. “After that, of course, came the Turkish lira, and the economic situation we have today, which is getting worse and worse, and people are trying to find a reliable financial instrument for their savings.”

Crypto has exploded in popularity despite years of government warnings about the sector’s infamous volatility.

Back in 2017, officials cautioned the public that crypto was a speculative sector that would collapse, while Turkey’s Directorate of Religious Affairs said Bitcoin and other cryptocurrencies were not permissible in Islam, because they lacked an intrinsic value like gold, and were too shrouded in secrecy and prone to abuse by criminal networks.

Last year’s abrupt collapse of the Thodex and Vebitcoin cryptocurrency exchanges was greeted with criminal charges and a wave of news stories on how Turks were being swindled by the crypto craze.

But Baktas said the negative publicity is not deterring the public from joining the crypto sector.

“Even mainstream TV channels talk about crypto now, and even when they show very bad news about crypto, Turkish people get more into crypto, because they don’t care about that bad news showing it as some kind of unreliable sector.”

Meanwhile, having already banned cryptocurrencies for payments, Turkish authorities are working on new legislation that would seek to better regulate the sector.

This month Baktas and other crypto experts met with lawmakers in Ankara who are drafting new regulations that would streamline registration for new crypto exchanges, and potentially allow exchanges like NakitCoins to buy and sell crypto in Turkish lira directly.

“The aim is to regulate the system, to prevent malicious intent, protecting investors and preventing victimisation,” Mustafa Elitaş, the deputy head of the ruling Justice and Development Party in parliament, said on January 6.

Elitaş has been meeting with experts like Baktas and representatives from exchanges to discuss a new regulatory regime – a sign, says Sert, that the government is giving the issue serious thought.

“He is trying to understand the landscape, and it was helpful for him to talk to those community members, to understand better what the issues are,” said Sert.

Rumours have been circulating in Turkey about what the official new crypto rules may include, such as slapping a 40 percent tax on crypto profits – something Elitaş has publicly denied.