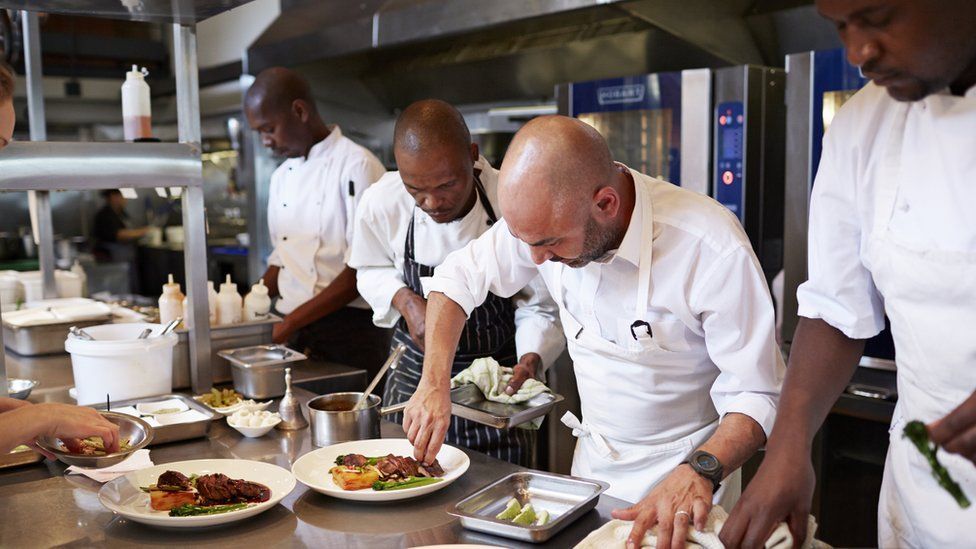 Employers are planning the lowest number of job cuts for over six years, as the economy reopens after the pandemic.

Redundancy figures for June from the Insolvency Service saw 15,661 positions put at risk in Great Britain.

The reduction in expected redundancies comes despite the imminent end of the furlough scheme which was designed to protect jobs during the pandemic.

Employers planning 20 or more redundancies have to file a form called HR1 notifying government at the start of the process.

This data gives an early indication of moves in the labour market, months before they show up in the official unemployment figures.

Proposed redundancies have been on a downward trend since September, despite two lockdowns being imposed across most of the UK during that period. June saw the lowest monthly total since February 2015. 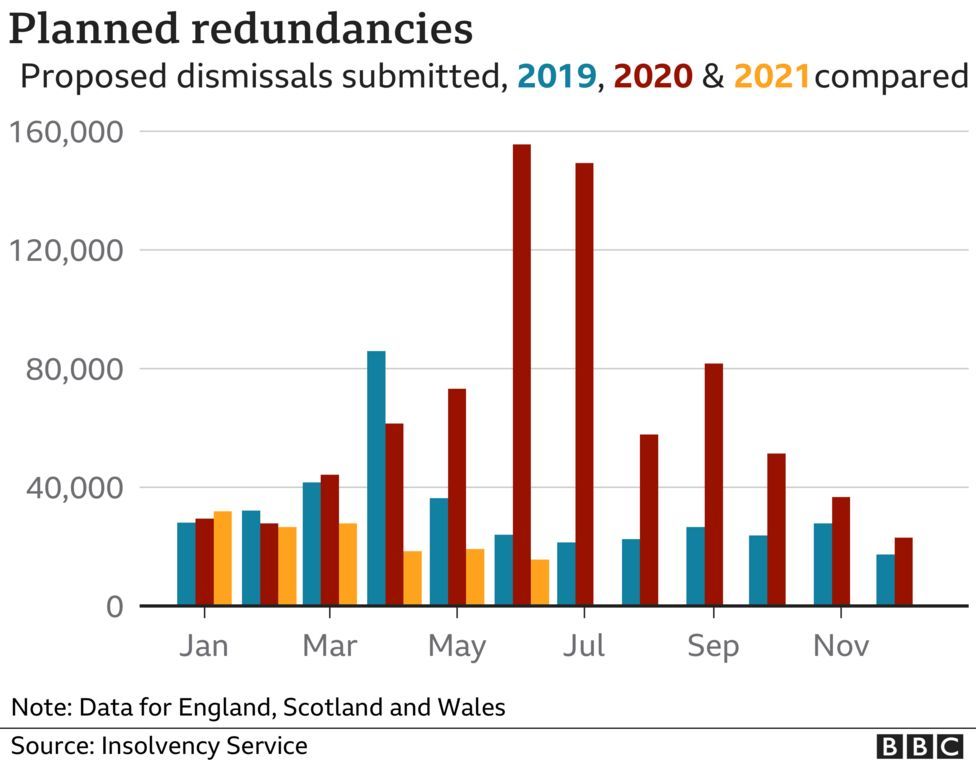 Redundancy figures from the Office for National Statistics have shown a similar trend, a few months later.

"The data suggest that there is no spike in redundancies coming in July or August," says Xiaowei Xu, senior research economist at the Institute for Fiscal Studies. "The labour market is in a much better position than anyone expected at the start of the pandemic, and it shows how well the furlough scheme has worked,"

The latest numbers are the lowest since the Insolvency Service tightened up reporting guidelines, according to Tony Wilson of the Institute for Employment Studies.

Before that, it was more common for firms to fail to file the necessary paperwork when planning redundancies, leading to artificially lower figures, he says.

The number of HR1 forms filed has also been falling this year, with 179 forms filed by 151 different employers. 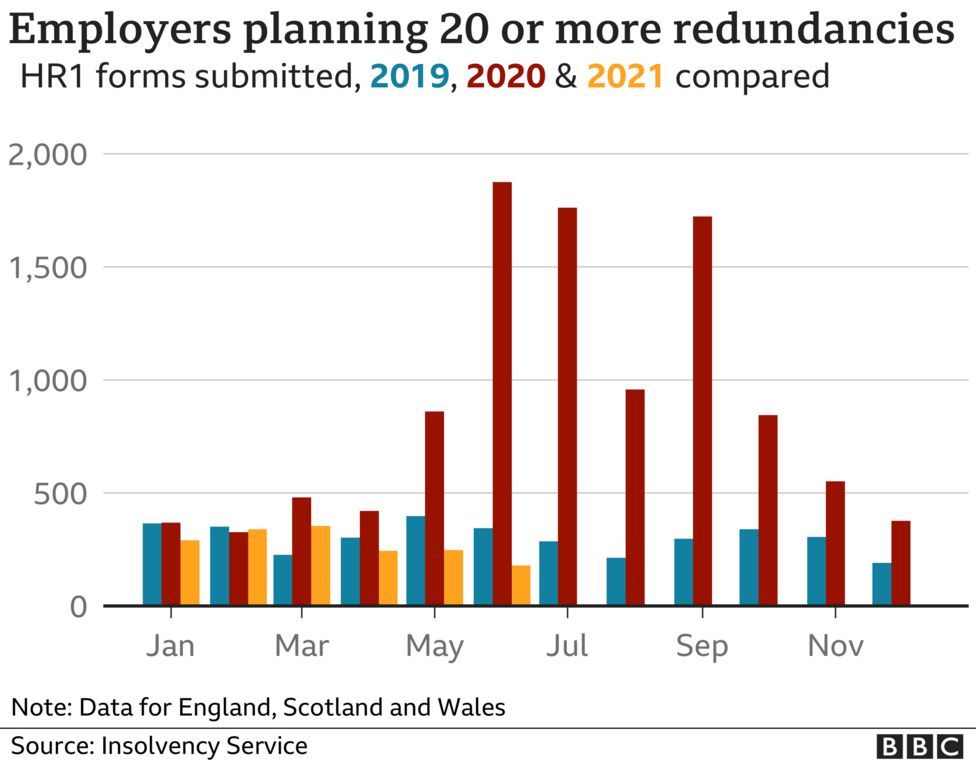 That's the lowest number of forms since 2014, despite the winding down of the furlough scheme, where the government has supported jobs in the pandemic by paying wages when employers cannot.

No rise despite end of furlough

From July, employers will have to pay 10% of employees' wages, on top of pension contributions and employer's National Insurance. That rises to 20% in August, until the scheme finishes completely at the end of September.

"Anyone who has been on furlough this year has already cost their employers money - so their employers must be keen to keep them on. It's not surprising that they are not being made redundant in large numbers," says Ms Xu.

A total of 11.6 million jobs have been furloughed during the pandemic, though only 2.4 million were still on furlough at the end of May. 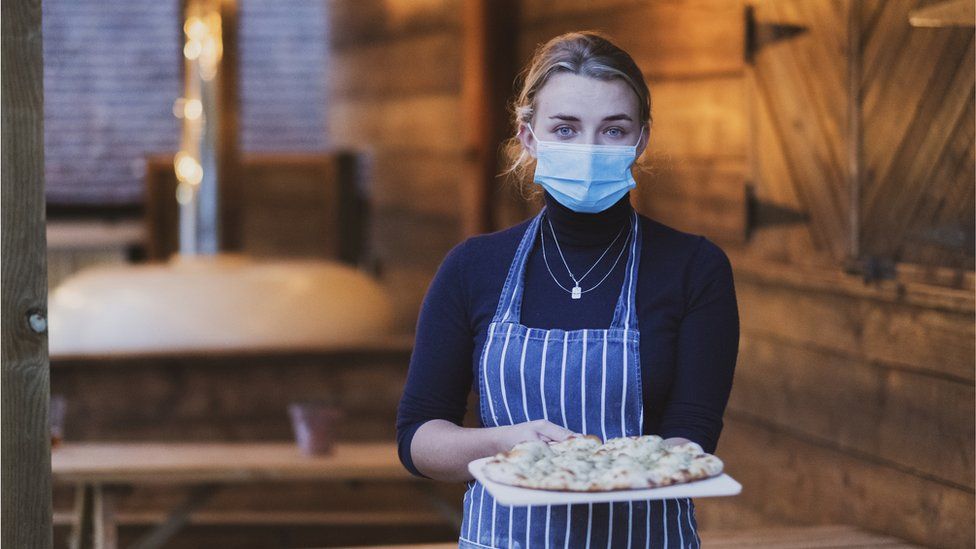 The success of the furlough scheme and the vaccine programme have lead many economists to cut their forecasts of how many jobs would be lost in the pandemic.

"By the time the furlough scheme ends on 30 September, the economy is likely to be strong enough to support a level of employment not far off where it is now. In fact, there is evidence that firms are finding it increasingly difficult to hire workers, especially in industries such as transport and manufacturing," says Ruth Gregory, senior UK economist at Capital Economics.

"I think it's likely that many firms have already made and communicated their plans and that with the easing of restrictions happening on schedule next week, we just won't see any significant increase in redundancy notifications over the next few months," says Mr Wilson.

Until recently, HR1 data were not routinely published, except for in Northern Ireland.

Last year the BBC began requesting these figures through the Freedom of Information Act, revealing the extraordinary increase in redundancy plans through the spring and summer of 2020.

This year, the Insolvency Service has started to publish these figures every month on its website.

The data only covers firms proposing 20 or more job cuts, so smaller firms are not picked up by these figures. Employers sometimes notify more redundancies than they eventually make.

The figures are not classified as Official Statistics, which are subject to rigorous quality control procedures.