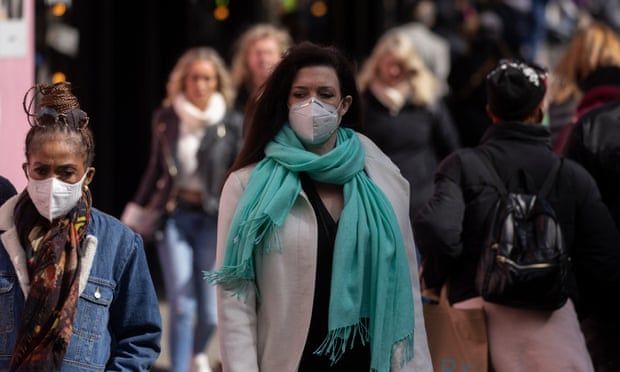 Covid infections remain around record levels in most of UK, figures show

ONS data reveals about one in 13 people had virus in week ending 2 April, with only Scotland seeing fall
The number of Covid-19 infections remains near or at record levels in most of the UK, with only Scotland experiencing a drop, figures from the Office for National Statistics have revealed.

The ONS data, based on swabs collected from randomly selected households, shows that, for the second week running, about one in 13 people across the UK are thought to have had Covid – an estimated 4.88m infections.

In England, the number of infections remained steady in the week ending 2 April, with an estimated 7.6% or one in 13 people in the community thought to have had Covid. In Wales, the estimated rate was up from one in 14 people to one in 13 while in Northern Ireland the most recent estimate was one in 16.

Within England, infections rose in the north of the country and the east Midlands, but fell in the south-east. In other parts of the country, including London, the trend was unclear, although levels remained highest in the south-west, where almost 9% of the population were thought to have had Covid in the most recent week.

Sarah Crofts, the head of analytical outputs for the Covid-19 infection survey, said there were early signs in the latest data that infections may no longer be increasing in some parts of the UK.

She added: “It is too early to say if infections have peaked in England and Scotland. We will continue to monitor the data closely.”

The ONS survey confirms that the Omicron variant BA.2 remains the most common variant in the UK. BA.2 is more transmissible than the original form of Omicron, BA.1, that reached the UK towards the end of last year.

While BA.2 is believed to have played a key role in the latest wave of infections, experts have suggested the removal of Covid restrictions, waning immunity and a shift towards pre-pandemic behaviour could also be contributing.

According to a report from the UK Health Security Agency (UKHSA), released on Friday, several variants of Omicron have now been identified, although not all have been detected in the UK. The report adds that the XE variant – a combination of BA.1 and BA.2 – is now spreading almost 21% faster than BA.2, with 1,125 cases in England identified as of 5 April.

The ONS data also reveals variations by age, with infection levels rising among those between school year 12 and those aged 34, while 7.1% of those aged 70 and over were thought to have had Covid in the week, the highest level yet for that age group. However, infections fell among younger children and those between the ages of 35 and 49, with the trend unclear among other age groups.

Prof Rowland Kao, an epidemiologist at the University of Edinburgh, said one concern was that most elderly people received their last booster jab more than four months ago.

According to data from UKHSA released on Thursday, just over 15% of people aged 75 and above have received their spring booster vaccination: the programme officially began on 21 March. The agency said the figures include those who have come forward for a third dose (first booster) since that date, as well as those who have received a second booster.

The ONS survey now gives the best picture of Covid levels around the UK. From 1 April free testing for Covid ended for most people, with many reporting difficulties getting hold of free kits in the weeks before, meaning far fewer infections are now being picked up by people coming forwards for a test. Experts behind another major infection survey, React-1, issued their final report this week after the government axed funding for the project.

The recent rise in infections across the UK has also been reflected in a rise in Covid patients in hospital and, more recently, an increase in in deaths. While the link has been weakened by Covid vaccinations, experts, including Prof Chris Whitty, have warned the NHS is under pressure.

On Wednesday NHS bosses urged families to help them discharge loved ones, even if they have Covid, to help the service weather a “perfect storm” fuelled by heavy demand, severe staff shortages and rising Covid cases.
#COVID-19  #Covid
Add Comment