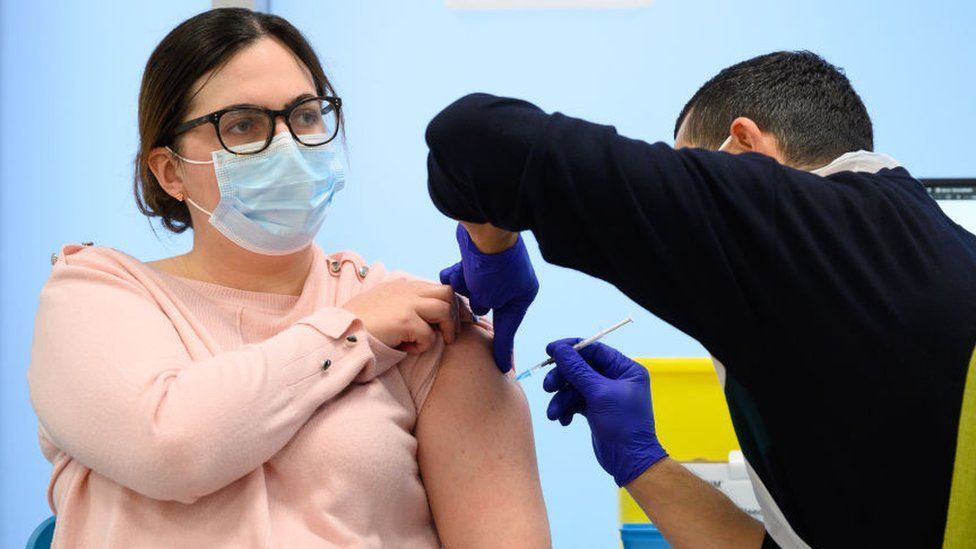 Covid booster: Hospitals and pharmacies urged to ramp up rollout

NHS England is to issue detailed guidance to hospitals, pharmacists and GPs about the major expansion of the Covid booster vaccine programme.

Hospital hubs will be asked to offer jabs to the public as well as NHS staff and more pharmacies will be used.

The government aims to offer all adults in England a booster by 31 January, amid concern about the Omicron variant.

He said people should be "a bit cautious", by taking precautions such as a lateral flow test or wearing a mask.

During a Downing Street news conference on Tuesday Prime Minister Boris Johnson urged people to get a jab but suggested they should not cancel Christmas plans.

He said people did not need to cancel Christmas parties and nativity plays, adding that the government was taking a "balanced and proportionate" approach in response to the new variant.

Earlier in the day UK Health Security Agency head Dr Jenny Harries had said people should get their booster jab but also suggested they should not socialise "when we don't particularly need to".

He described it as a "tough ask" but said he believed the NHS and others would be able to achieve it.

The health secretary said people should wait to be called for their booster but urged people to "step up" when asked.

The prime minister said booster doses would be given at 1,500 community pharmacy sites and extra hospital hubs in England - and that 400 military personnel would also be on hand to help with the rollout.

People will be invited to book a third dose three months after their second.

Previously hospital hubs had largely focused on vaccinating NHS and care staff but they will now be asked to deliver jabs to the general public.

About 50 mass vaccination centres have closed in England as the original vaccination programme passed its peak.

And many GPs have stopped delivering Covid vaccines to focus on other patients and flu jabs.

Northern Ireland has also announced extra vaccination clinics to meet demand. Scotland and Wales have said their booster programmes will be ramped up, but are yet to lay out the full details.

But health leaders have warned that expanding the booster rollout poses a big challenge. Matthew Taylor, chief executive of the NHS Confederation, which represents the healthcare system in England, Wales and Northern Ireland, said accelerating the booster rollout would have "consequences" for a health service which was already stretched.

There's been much talk of the ability of Omicron to get around some of the defences built up by vaccination.

So why bother with boosters? Why not tweak the vaccines like manufacturers say they can?

When it comes to immunity vaccines do two things - protect us from infection and from serious illness.

Some of the variants that have emerged, including Delta which is dominant in the UK, have reduced the ability of the vaccines to protect against infection. On paper it looks like Omicron may do the same, although it's still too early to tell.

But the vaccines have held up very well in protecting against serious illness for all variants so far.

The booster dose has been shown to significantly increase the immune response, so will be clearly beneficial even if the worst fears are realised about Omicron.

What's more, new vaccines would take 100 days to produce and then you've got to get them into arms.

The current vaccines are available now.

Some scientists also caution against changing the vaccines because in the longer term it could put us in a worse position.

Their argument is the vaccines were based on the original Wuhan strain of the virus, which is most likely to share common features with all variants.

If we try to match vaccines to one particular variant we risk another popping up on the other side of the "family tree" that vaccines will struggle to cope with even more.

The doctors' union, the BMA, warned GPs were already working extra hours and would struggle to maintain their existing workload if they were required to help roll out boosters.

Saffron Cordery, deputy chief executive of NHS Providers, which represents NHS trusts, said the January target was "a huge logistical challenge" for the health service but ramping up the booster rollout was "absolutely the right thing to do".

A total of 22 cases of Omicron have been confirmed in the UK so far - 13 in England and nine cases in Scotland linked to a single event.

There are fears that Omicron may spread more quickly and could make vaccines less effective, while the World Health Organization says there is a higher risk of reinfection than with other variants.

Government scientists have said the impact of the variant on the UK is "highly uncertain" but it may require a "very stringent response" to avoid unsustainable pressure on the NHS.

In leaked minutes of a meeting of the Scientific Advisory Group for Emergencies held on Monday, seen by the BBC, the group say it is "highly likely" Omicron can escape immunity caused by previous infection or vaccination "to some extent" - and that officials should prepare now for a "potentially significant" wave of infections.

As well as extending the booster rollout, Covid restrictions have also been strengthened in response to the Omicron variant, with face masks once again being required on public transport and in shops in England. 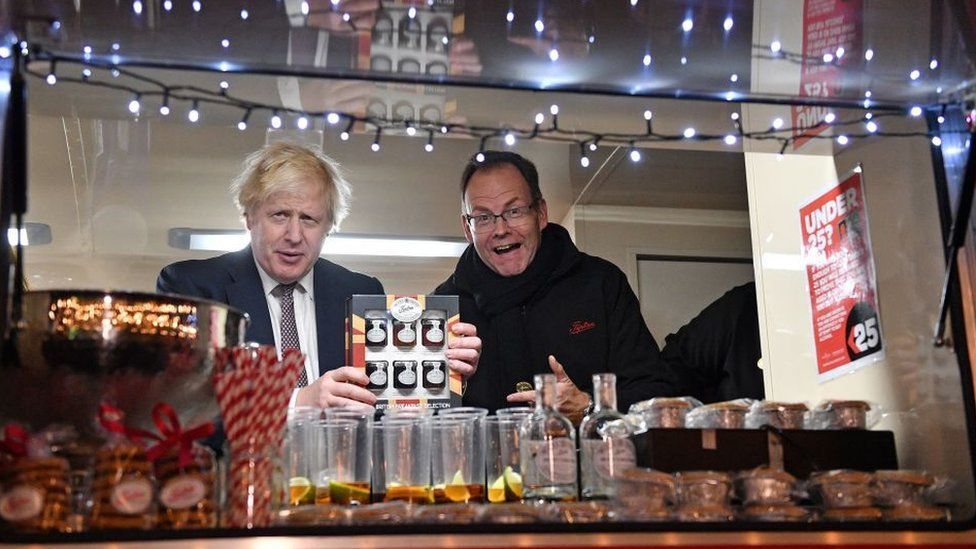 On Tuesday, Dr Harries suggested people should limit unnecessary socialising in the run-up to Christmas to keep the variant at bay.

But the prime minister said the government guidance remains the same and people should "take sensible precautions", like washing hands and wearing masks.

Kate Nicholls, chief executive of trade body UK Hospitality, told BBC Breakfast the industry hoped the prime minister's words would give people the confidence to continue to make Christmas plans and would "stem the flow of cancellations which we are starting to see".

Around 18 million people in the UK have already had a booster jab, with a total of 318,671 administered on Monday.

Since the rollout was expanded, another 14 million adults in England have become eligible for a booster in England alone, Mr Johnson said.

A further 39,716 Covid cases were reported in the UK on Tuesday, as well as another 159 deaths within 28 days of a positive test. 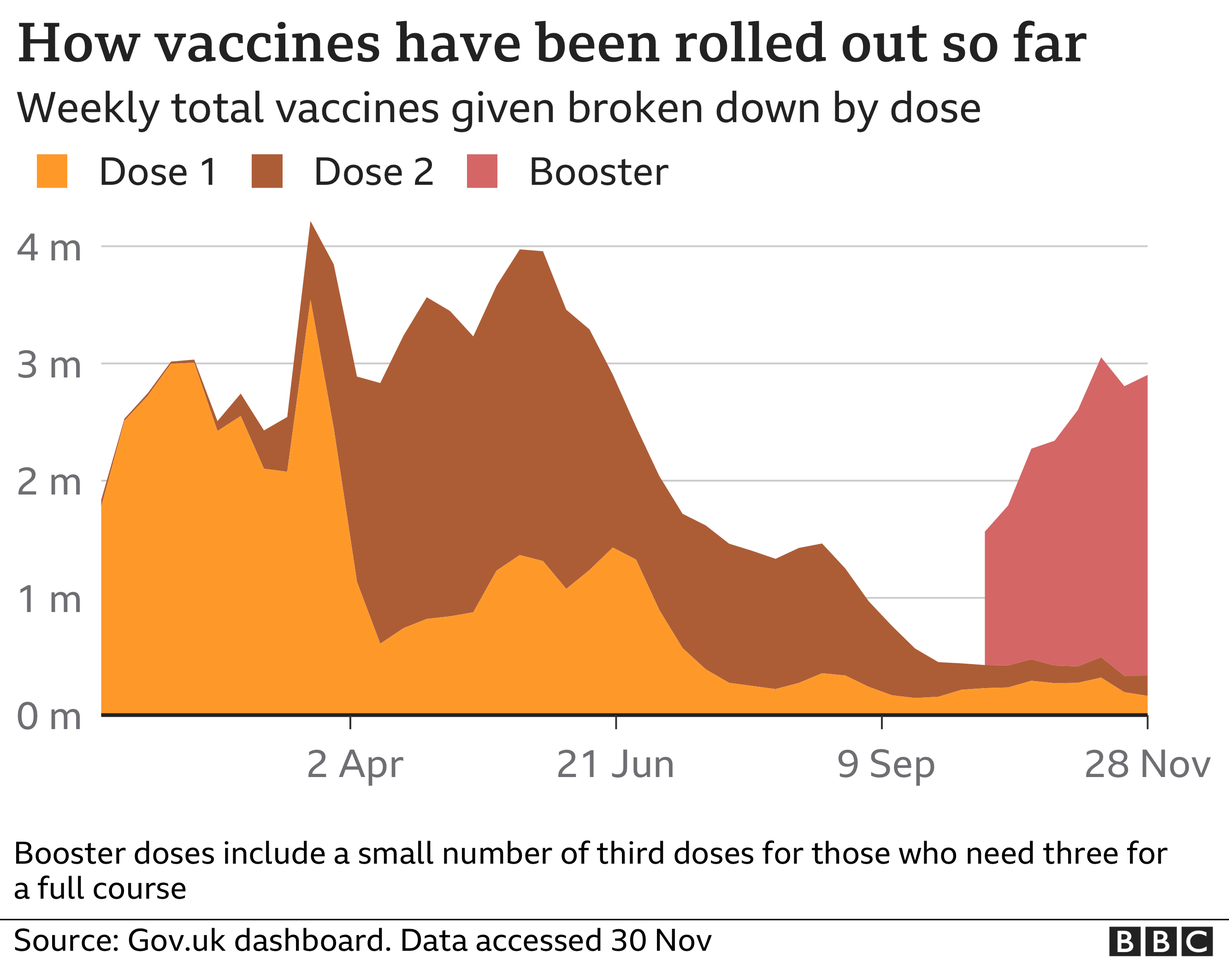