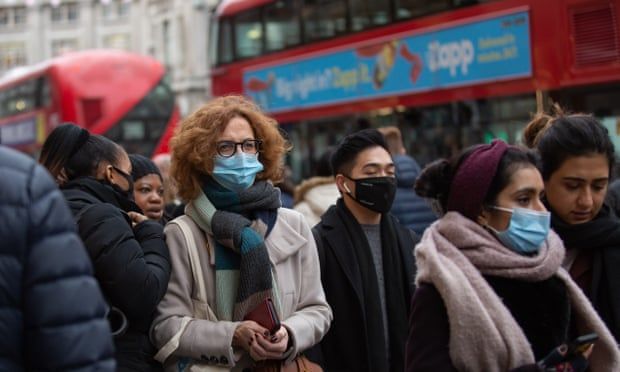 The UK’s Covid alert level has been raised, indicating substantial pressure on the NHS, amid concerns over the rapid increase in Omicron cases and a warning that the health service is “on its knees”.

The decision to move from level 3 to 4 was taken on Sunday on the recommendation of the UK chief medical officers and NHS England’s national medical director.

They said: “The emergence of Omicron adds additional and rapidly increasing risk to the public and healthcare services. Early evidence shows that Omicron is spreading much faster than Delta and that vaccine protection against symptomatic disease from Omicron is reduced.”

Level 4 is defined by the government as “a Covid-19 epidemic is in general circulation; transmission is high and direct Covid-19 pressure on healthcare services is widespread and substantial or rising”. The alert level was moved down from level 4 to level 3 in May. 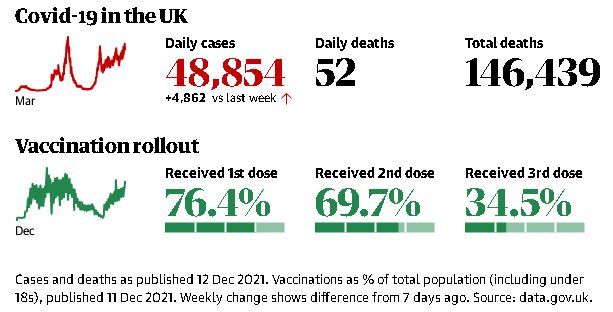 However, the emergence of the Omicron variant has set alarm bells ringing, with the UK Health and Security Agency (UKHSA) warning that even if the new variant causes less serious disease than Delta, it could lead to 5,000 people admitted to hospital a day, while the epidemiologist Prof Neil Ferguson said the total could be double that number.

The chief medical officers referred to the fact that the NHS is already under pressure even before the full impact of Omicron has been felt, a point that was made in starker terms by other senior health figures on Sunday.

Prof Andrew Hayward, a member of the Scientific Advisory Group for Emergencies (Sage) from University College London, told LBC: “We’re talking about a hospital system that is already pretty much on its knees with the current level of activity, and that level of activity is going to go up dramatically and much worse than a normal winter. So you know, there is going to be a big problem.”

Hospitals are expecting NHS England to declare a national incident within days, meaning decision-making will be more centralised. It will probably lead to routine operations being cancelled once more, adding to a waiting list that is already almost 6 million long, and staff repurposed. A senior NHS source said GPs would be told to massively ramp up boosters over the next two weeks, prioritising them over non-urgent appointments and reducing the number of face-to-face interactions outside administering vaccine doses.

Chris Hopson, the head of NHS Providers, which represents hospital trusts in England, said the health service was already “experiencing significantly higher pressure than we have ever seen before at this time of year”.

He said he was “struck by how many long-serving [hospital] CEOs are saying that this is clearly and incontrovertibly the highest and longest sustained period of pressure they have seen in their careers. They are also worried that this is occurring before the traditional January winter peak and at a time when they don’t yet know what extra Covid caseload will come from Omicron. And there seems to be a good chance that an Omicron peak may fall in exactly the same early- to mid-January time period.”

He said it was a mistake to just look at the Covid caseload for hospitals and wrong to compare the current situation, which had seen “pressure for months on end”, with January 2020 which he said was challenging but saw a peak which came and went relatively quickly.

Hopson pointed to the latest NHS statistics, saying they showed it was the second busiest ever November for A&E attendances and bed occupancy rates, with 11% occupied by patients medically fit to be discharged but delayed by insufficient social care capacity. He said this had partly been driven by a reduction in workforce which the NHS was also experiencing, losing staff to the retail, hospitality and logistics sectors which were paying sign-on bonuses and higher wages, or to early retirement or staff moving overseas.