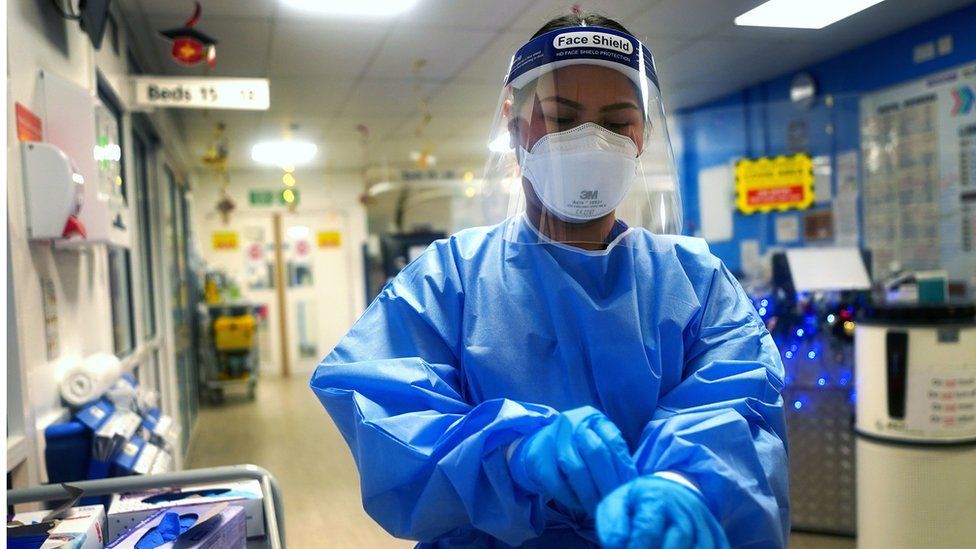 The government has written off £8.7bn it spent on protective equipment bought during the pandemic, accounts show.
The Department for Health and Social Care documents show items costing £673m were unusable, while £750m of equipment was not used before its expiry date.

The largest write-off - £4.7bn - was because the government paid more for it than it is currently worth, now that global supplies have recovered.

No 10 said the purchases were justified - with 97% of items suitable for use.

A further £2.6bn of equipment was judged to be unsuitable for use in the NHS, the 2020/21 accounts show, but the Department of Health and Social Care (DHSC) believes it could still be sold or given to charities.

At the start of the pandemic, countries around the world were clamouring for personal protective equipment (PPE), sending prices soaring.

No 10 said "we stand by the decision to purchase the items that we did", saying the approach was "justified" to get PPE to the front line.

"We were acting in a highly competitive global market with many countries imposing export bans and obviously we were seeking to secure PPE for frontline clinicians," the prime minister's official spokesman said.

The spokesman gave the example of protective aprons, saying they were now worth about a third of the price they were selling at in the earlier stages of the pandemic.

But he said it was important to ensure there were sufficient supplies at the time.

The spokesman said that "97% of PPE ordered was suitable for use and we're seeking to recover costs from suppliers wherever and whenever possible".

No 10 said the government was now able to "mitigate" similar problems in the future by "massively increasing our onshore-based PPE production".

Labour's shadow chief secretary to the Treasury, Pat McFadden, said that coming after disputed reports of billions written off due to fraud in Covid support funds, this would be "galling to hard-working households" facing tax rises.

"These levels of waste destroy any claim the Conservatives have to be careful stewards of the public finances," he said.

Liberal Democrat health spokeswoman Daisy Cooper said the government was "inept", adding: "They cannot be trusted with our money and are totally out of touch."
#COVID-19  #Covid
Add Comment