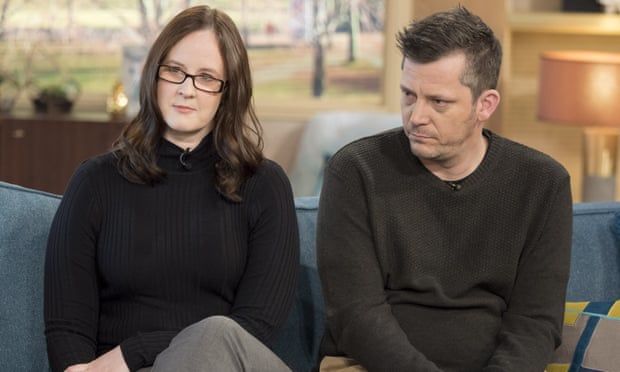 Couple who cashed in on mother’s Hertfordshire health scam jailed

Laura and Philip Borrell benefited from Frances Noble, 66, defrauding council of £624,000 by faking illness
A couple who enjoyed holidays abroad with money from a relative who faked being bedridden to scam a local authority out of more than £624,000 have been jailed.

Earlier this year, Frances Noble, 66, was sentenced at St Albans crown court to four years and nine months in jail for defrauding Hertfordshire county council of £624,047.50 by pretending she was bedridden, unable to feed herself and needed round-the-clock care between 15 January 2007 and 26 November 2018.

On Tuesday, Noble’s daughter, Laura Borrell, 44, was jailed for three years and nine months, and her son-in-law, Philip Borrell, 46, was sentenced to four years and three months’ imprisonment for money laundering offences that arose from the fraud.

In 2017, the Borrells went on ITV’s This Morning, telling the hosts Phillip Schofield and Holly Willoughby that Laura Borrell was one of the youngest people to have had dementia.

Judge Richard Foster told the pair that they were “held out at times as carers when clearly you were not”.

He noted that Laura Borrell, who has a serious neurological condition, had made a claim for state benefits to assist with her own personal care needs, and so on that basis was “a person in need of care and not capable of providing care”.

The judge, who described their crimes as of a “sophisticated nature” and carried out over a sustained period of time, told the couple: “There was evidence of an extravagant lifestyle.

“You both enjoyed holiday trips to variously Boston, San Francisco as well as to Canada in the period 2011 to 2017. You, Philip Borrell, had a good salary but this was subsidised by your use of this criminal money.”

He worked as a software project manager but was frequently travelling with his wife, the court heard.

The judge told Philip Borrell that he had chosen to “ignore your suspicions as to the source of the moneys, that source being a fraud on Hertfordshire county council, on a massive scale”.

The court has previously heard that from 2005, Noble received £702,905 from the council, but the offence she admitted only came into existence in January 2007, and so she was only indicted on moneys received over this later period.

The prosecution said there had been forged emails purporting to have been written by carers she had hired to look after her at her home in Damask Green Road in Weston, near Hitchin.

Care payments from the council were made directly into a bank account under Noble’s control.

At an earlier hearing, Noble, of Rohrwallallee in Berlin, Germany, and Philip and Laura Borrell, of no fixed address, admitted one count of fraud.

The pair also admitted one further count each of acquiring criminal property, in the sum of £39,700 for Laura Borrell and £6,218.92 for Philip Borrell.

Noble is awaiting extradition from Germany to serve her sentence. The sentences handed out to the Borrells on Tuesday are concurrent on all counts.
Add Comment