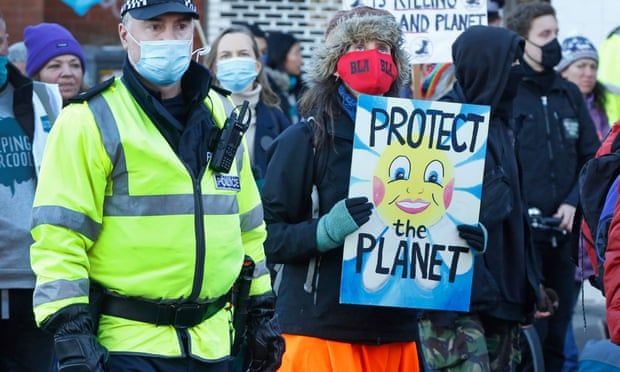 A counter climate summit kicks off in Glasgow on Sunday amid mounting criticism from activists about greenwashed solutions and stalled action from corporations and rich nations inside Cop26.

The People’s Summit for Climate Justice will bring together movements and communities from across the world to amplify voices, ideas and solutions it believes are largely absent from Cop – including the global green new deal, polluters’ liability, indigenous ecological knowledge and the gulf between net zero and real zero emissions.

Organisers hope that sharing expertise on equitable and transformative non-market solutions to the climate emergency will help create a powerful grassroots collective to force governments to be more ambitious and less beholden to big business.

The summit comes after world leaders last week failed to commit to phasing out fossil fuels fast enough to contain global heating to 1.5C. It follows several days of protests in Glasgow, London and another 200 cities globally, with tens of thousands of people taking to the streets to demand bold, fast and fair climate action.

“Building power outside the Cop is essential if we are to hold world leaders to account inside the Cop, and force them to do what we know needs to be done,” said Asad Rehman, the director of War on Want and co-founder of the Cop26 Coalition which organised Saturday’s global protests and the summit.

“We’re creating a movement of movements in order to deepen and reshape the understanding of the climate crisis in the global north through a climate justice lens.” 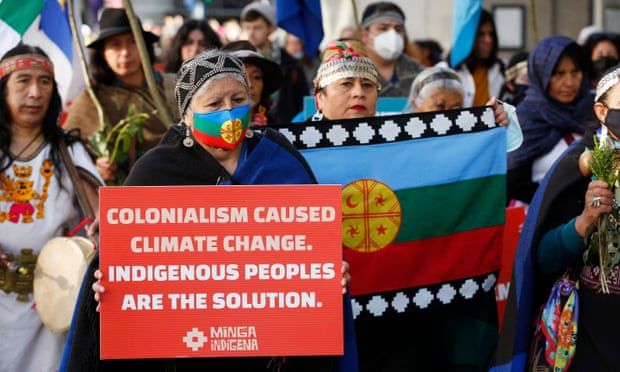 It opens with a People’s Tribunal in which activists and former Cop negotiators will hear evidence on charges against the UNFCCC, including the failure to come up with appropriate climate finance for planetary and social survival and a failure to regulate corporations.

Participants will share personal stories about the impact of climate-related land loss, water shortages and forced displacement, which they argue will get worse if governments and corporations forge ahead with unjust climate solutions such as carbon capture and mass reforestation.

“Putting a price on natural resources is an act of colonialism and inhumanity. But there are other ways, humanity-based alternatives that we’ll share so they can’t say that they didn’t know,” said Calfin Lafkenche, a Mapuche organiser from Chile in Glasgow with the Minga movement, an indigenous solidarity network taking part in an event on false climate solutions.

While some summit delegates are also participating at Cop26 as observers or panelists, the Minga movement refuses – arguing that the terms and conditions of participation violate their rights as autonomous peoples. Still, organisers hope the people’s summit will help build bridges between civil society groups inside and outside the UN talks in order to create a more unified and powerful movement.

Another central theme will be net zero – the concept of offsetting or neutralising greenhouse gas emissions (rather than ending them) through carbon markets, new as-yet-undeveloped technologies and massive reforestation programmes.

Pledges to achieve net zero by 2050 have been heavily promoted by world leaders at Cop26 as signs of progress, despite warnings that the numbers don’t add up, and that in any case this would be too little too late to avoid catastrophic climate disasters in some parts of the world.

“They are trying to sell net zero as a Cop26 success, but it is nothing more than the next more sophisticated phase of climate denial to protect business as usual. It’s mitigation denialism,” said Scott Tully from Glasgow Calls out Polluters.

At the people’s summit, the Real Zero, Real Solutions panel will also focus on liability, and why countries and corporations responsible for greenhouse gas emissions should compensate communities who’ve lost their homes, land and livelihoods to rising sea levels and climate disasters such as floods and drought.

Rich countries including the US and UK oppose the inclusion of liability in negotiations about averting and minimising loss and damage associated with climate change impacts, even though many communities are already living with the consequences of greenhouse gas emissions they did not contribute to.

Hellen Kaneni, the Africa region director for the US nonprofit Corporate Accountability, said: “People want big polluters to be held to account, and liability measures to guide governments exist but it’s not being discussed at Cop because of conflicts of interest. Polluters should leave the room when we’re creating checks and balances to regulate them, instead it’s like they own the UNFCCC (United Nations Framework Convention on Climate Change) space while we cannot get in.”

Kaneni, who is based in Kampala, Uganda, was unable to attend in person as she could not access a Covid vaccine. About two-thirds of civil society organisations who usually send delegates to Cop have not travelled to Glasgow due to “vaccine apartheid”, changing travel rules, extortionate travel costs and Britain’s hostile immigration system.

Migrant rights groups will also be heard at the summit. The climate crisis and environmental destruction are already fuelling internal displacement and forced migration in communities around the world, yet such stories have been largely absent inside the Cop negotiating rooms.

“Talking about climate change in terms of fossil fuels is a Eurocentric perspective, it should be viewed through a human rights lens which recognises that everyone has the right to thrive, not just survive,” said Yvonne Blake, social justice advocate at Migrants Organising For Rights and Empowerment (More) in Glasgow – a dispersal city for refugees and asylum seekers in the UK.

“Unless we shift the focus to people, we’ll replicate the same colonial structures in which black and brown people’s bodies and lands will be sacrificed,” added Blake.

In all, more than 200 events – panels, people’s tribunals, workshops and artistic performances – will take place at venues across the city and virtually, covering diverse yet interconnected topics such as health, indigenous traditional knowledge, gender, nuclear power, land rights, food sovereignty and green jobs.

In a virtual all-day event on Sunday, a people’s health hearing will hear the voices of those who “embody the impact of extractivism, corporate greed and climate change,” said Tammam Aloudat, a Syrian doctor and director of the Global Health Centre in Geneva. Speakers from India, West Papua, Ecuador, Nigeria and the Philippines will describe the health impacts of mining, toxic waste, oil drilling and climate disasters in their communities.

Aloudat added: “The people’s summit is not only about shifting power, it’s a pronouncement of mistrust in our leaders. This is a symbolic act of dissent.”