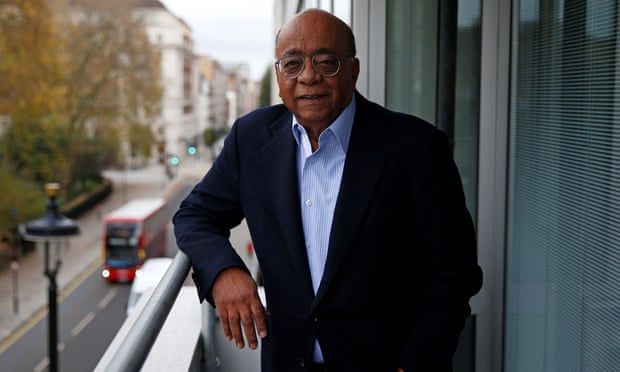 State capture is growing on every continent but only because the west helps to launder and hide money stolen by kleptocrats
Last week, John Penrose, Boris Johnson’s anti-corruption tsar, resigned in protest at his leader’s apparent breach of the ministerial code during Partygate. In January, Lord Agnew resigned as a Treasury minister, angered at the government’s negligence in allowing fraud to occur in its Covid contracts and loans.

Both were standing up against corruption through bad governance and poor leadership.

Last month, as part of the launch of its excellent publication Understanding Corruption, the University of Sussex’s Centre for the Study of Corruption held an event entitled Breaking Free from State Capture, featuring a keynote address by Mo Ibrahim.

The Sudanese-British telecoms billionaire is a passionate advocate and campaigner for good governance and better leadership through his foundation, charged with making a difference in Africa, where state capture and crony capitalism have enfeebled the continent for decades.

Corruption, defined as the abuse of entrusted power for private gain, is a complex and nuanced subject. Its consequences are deeply significant. It is a barrier to equitable and sustainable development, and it diverts resources from the poorest to the rich and the restlessly ambitious, creating inequity, exclusion and inequality.

It deters foreign investment and distorts public expenditures. It is pervasive, deleterious and often likened to water, as it is seen as unstoppable, difficult to contain and always finds a way around barriers. It permeates our political and legal institutions and trickles down to the bedrock of our society, manifesting in fraud, bribery, extortion, embezzlement, cronyism and nepotism.

Clearly, corruption does not have a colour, gender or race. It has a credo though: power, greed and a total absence of integrity and accountability.

One could easily also come to the conclusion that corruption only occurs in developing countries. An understanding of the mechanics of illicit financial flows will change that opinion. Corruption facilitates the business of criminality that enriches actors through drug and human trafficking, money-laundering and financing terrorism.

This financial network, enabled by lawyers, accountants, estate agents and others, stretches through the Americas and the Caribbean, eventually terminating in the US, EU, UK and its territories. These financial structures allow kleptocrats to easily hide the proceeds of their corruption.

State capture is a form of grand corruption and refers to systemic political corruption in which private interests significantly influence formation of a state’s policies and laws to their own advantage. These captors, through their personal connections to the political elite, gain a long-term economic stranglehold, not just by changing the rules but by the compounding over time of their interests, power and wealth.

Over the last few decades, state capture has manifested in countries including Bulgaria, Hungary, Brazil, Colombia, Mexico, Angola, South Africa, Turkey and Malaysia. That is evidence that corruption does not just occur on any one continent.

Capture can take place when a small group has unfathomable influence over policy formation. Consider the National Rifle Association in the US where, even in the face of school shootings, they continue to block policy on gun ownership.

Capture can also be a group of politicians in the same party, educated at the same university, stamping their elitist ideology on a country, closing ranks when there are allegations of corruption.

Ibrahim criticised the mismanagement of both natural and human resources, noting that more than 600 million African people were without electricity, which affects their quality of life, business and education. He asked and answered the question that has always been a conundrum: why is Africa so poor while it possesses so many natural resources?

He laid the blame squarely on corruption – aided by bad governance and poor leadership but more so by illicit financial flows entrenched in the US and Europe. He quoted the UN’s estimate that this amounts to more than $89bn (£75bn) a year – roughly 3.7% of Africa’s GDP – as money-laundering in the US and Europe enables the proliferation of corruption, supporting criminals and dictators.

He also outlined how corporate practices need to be addressed through better governance. He singled out big corporations such as Starbucks, Apple and Google, which have all had tax avoidance schemes investigated. He omitted Meta, Microsoft and Amazon.He lamented the dire need for registers of beneficial ownership of companies, previously shrouded in secrecy but now suddenly under scrutiny in tracing and freezing assets of Russians. He omitted laws to promote transparency of party financing and lobbying, as called for by Penrose.

Ibrahim ended with a declaration that corruption needed to be confronted in Westminster and Washington before it could ever be dealt with effectively in Africa. The world needs more people like Mo Ibrahim.
#Boris Johnson  #Johnson  #Covid
Add Comment