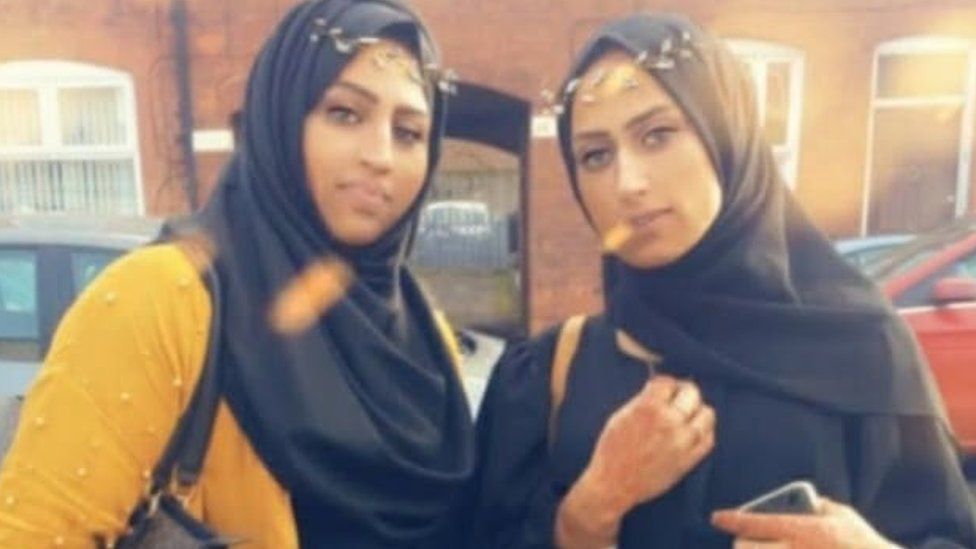 Nurse Areema Nasreen was one of the youngest NHS workers to die from coronavirus at the start of the pandemic. Almost a year on from her death, her sister reveals how Areema's last words changed the course of her life.

The last time Kazeema Afzal saw her sister alive, she was getting ready to go on to a ventilator at the hospital where both had worked since they were teenagers.

"She waved and said I love you," Kazeema recalled of the moment the 36-year-old nurse disappeared behind the double doors.

But Areema had one last message to pass on, which she told a colleague moments before she was sedated.

"She said, 'my sister... make sure she works hard. I want her to follow in my footsteps'," Kazeema said. "That was the last thing she said."

The two were inseparable growing up in Walsall, West Midlands, together with their younger sister Ash. Areema was only three years older than Kazeema, but "she was like a mum to us," she said. "Mum knew she could go to another country and Areema would be there to look after us all."

Their lives mirrored each others'. When Areema and Kazeema were still teenagers, they travelled to Pakistan where their families intended them to marry. 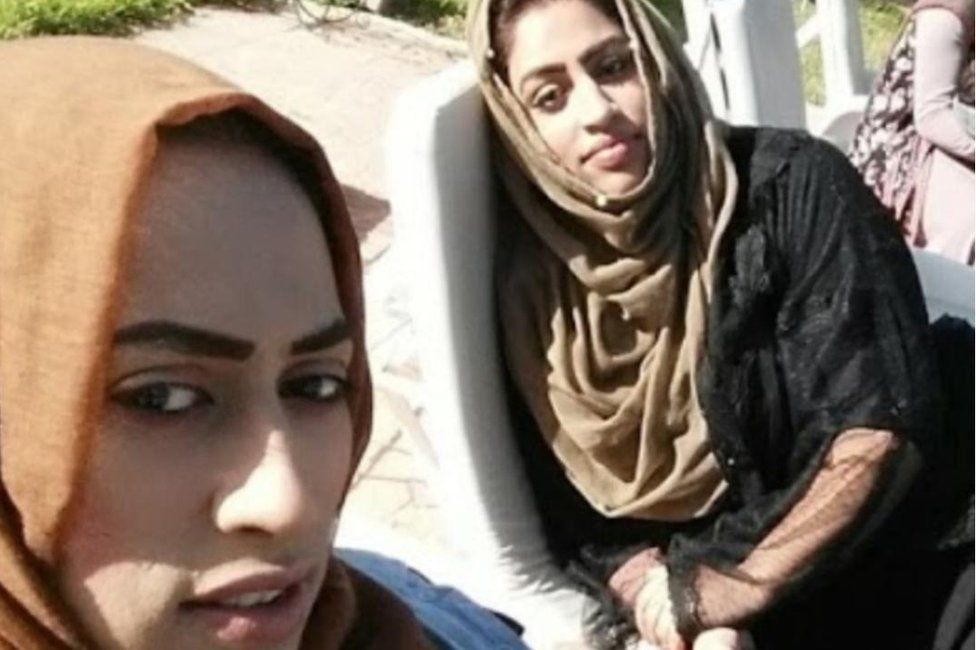 They were wed on the same day to two brothers and lived together for six months. "We grew up quickly," Kazeema said. "We had children very soon after." The sisters had three children each and even had the same due date for their youngest child.

Both were keen to work. When Areema started as a housekeeper in their home town's Manor Hospital in 2003 aged 19, her younger sister soon followed suit.

But it was always the eldest sister's dream to be a nurse. With her husband Fasil Tahseen's support, she became the first member of her family to attend university. In 2019, she became a staff nurse at the hospital that was her "second home".

"That was her childhood dream," said Kazeema, who praised her brother-in-law for helping his wife achieve it.

"For an Asian girl to get married and study after.. it's very hard for a partner who has come from another country. But he helped her until the end. He said, 'you do what you want to do'." 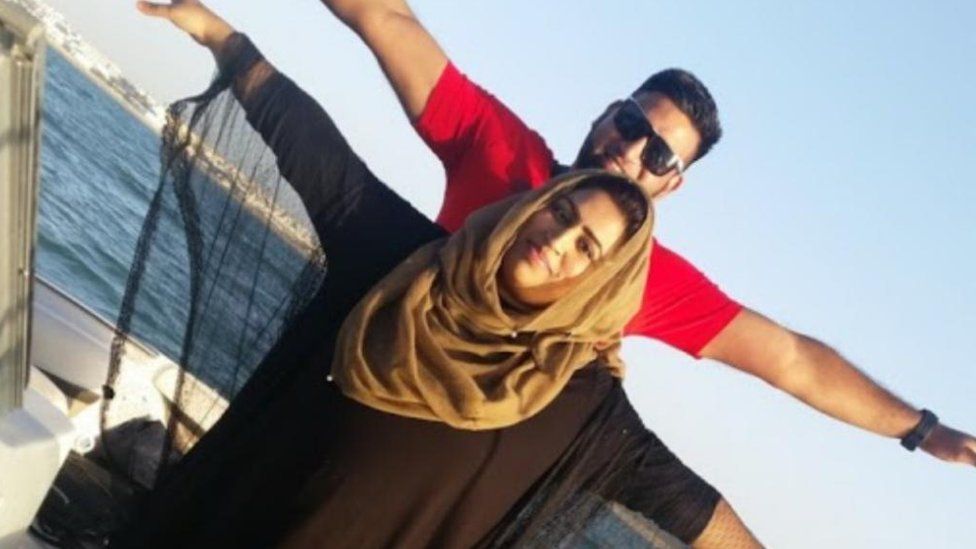 "She got such a buzz out of looking after people," her sister said. "She was always sending money home [to Pakistan]. "If someone needed water, she'd buy them a pump. She paid for the family of a severely ill child to go on a pilgrimage and she went with them."

Unsurprisingly then, Areema was a popular figure on the acute medical unit (AMU). She had been working there for three months when she began complaining of backache.

Her family thought it was purely the strain of her house move.

"She was never ill," Kazeema said. "When she said she was tired and lethargic, we just thought she'd overdone it. The cough came right at the end." 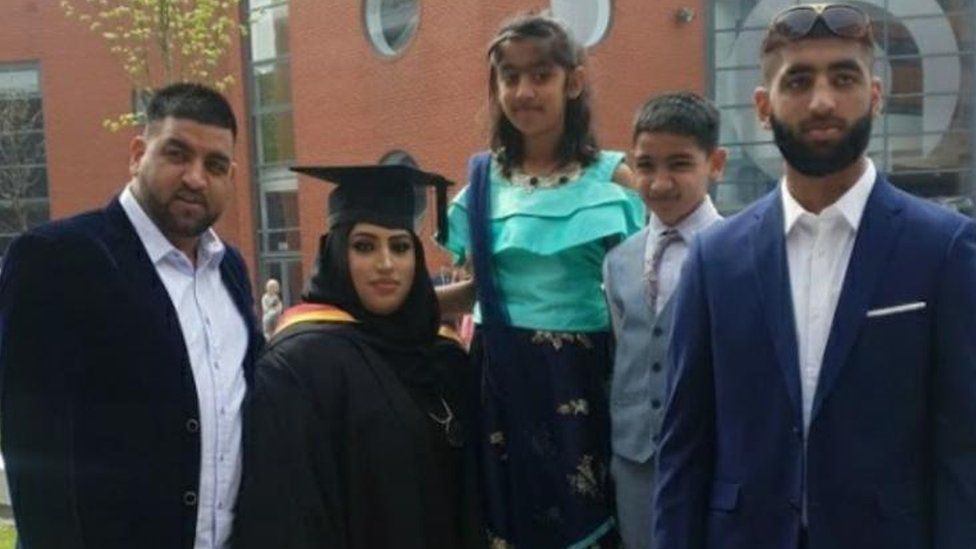 It was March 2020 and little was known about many of the symptoms of Covid-19. Areema kept on working, assuming she would turn a corner.

"The last shift was the worst ever," recalled her sister. "We told her to go home but she wanted to stay. She was gasping for breath."

When she continued to deteriorate, her family sent for an ambulance. A test two days later confirmed their fears.

"She sent me a text saying 'I've got Covid' with crying emojis." Areema remained in hospital. A few days later, a message came through in the early hours.

"My lungs are full," it read. She was being sent to ICU.

Kazeema left her home and ran to the hospital just a short distance away.

The two sisters sat together until the 36-year-old was put on the ventilator. 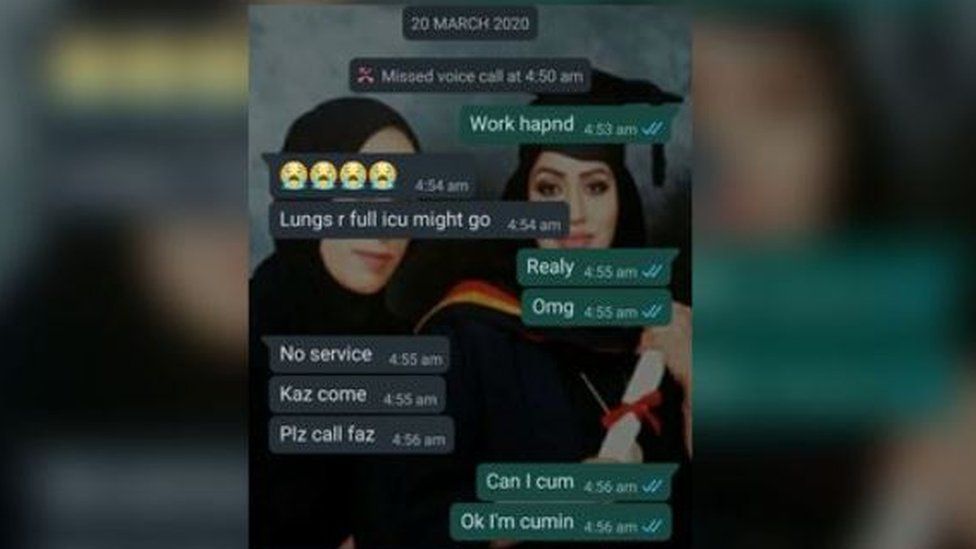 At first it looked as though she was improving. But as the pandemic has proved, coronavirus can hit its sufferers in waves and Areema's condition plummeted.

"I just got a phone call and they were saying 'I'm so sorry' - and I said, 'what are you trying to say, my sister's dying?'

"She died in her husband's arms."

Kazeema said she was not surprised by her sister's final words. "Straight away, I knew she would say that. She was the type of person to put someone else first at the end."

The two women had discussed many times the younger sibling's hope of following the same career path. But because she did not complete her GCSEs, she never thought she had a hope.

The words have stuck in her head ever since. Even though the pain of losing her sister has seriously damaged her mental health, Kazeema has found the strength to become a healthcare assistant - on the very ward where Areema worked. 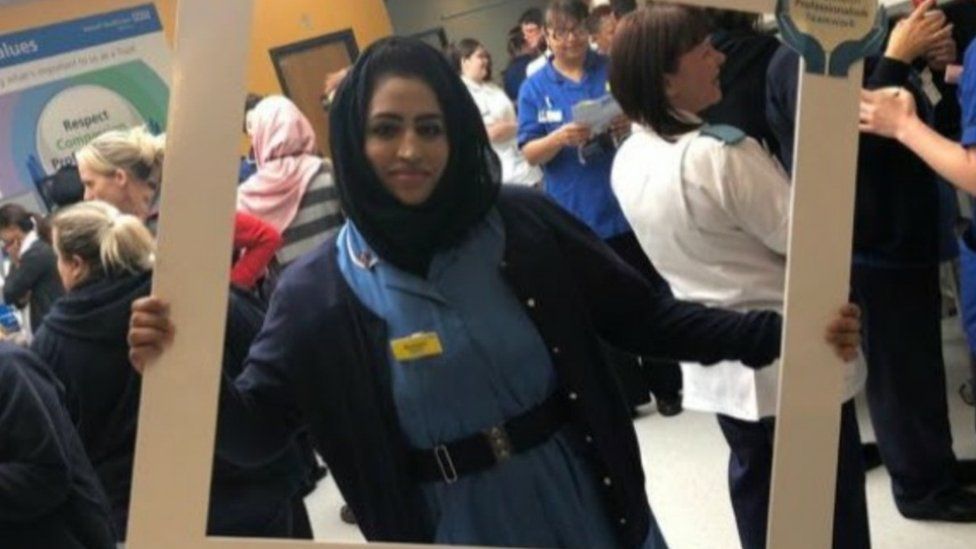 And this week, she is starting an apprenticeship at Walsall College which will pave the way for her to get a nursing qualification.

"I've got my pencil case and my calculator - I was so excited to get them, I was like a schoolgirl picking them up," she said.

Working on the AMU has been a tonic for Kazeema; with her sister's photographs on the walls, her spirit lives on, not least in the memories of her close-knit colleagues.

A scholarship has been set up in Areema's memory, to fund a degree in nursing for someone who dreams of a career in healthcare but cannot afford the fees. The first recipient is soon to be announced.

"Areema's legacy is going to live on," said Kazeema. "She always wanted to be a nurse and we were all so proud of her.

"I want people to be inspired by her - people who don't think they can do something, they can."