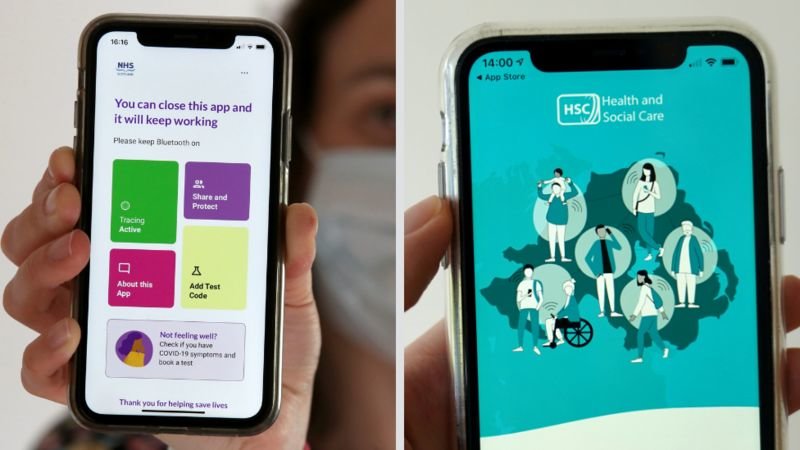 If they travel to each other's territory, they will now get alerts if they come into contact with an infected person. Users of the NHS Covid-19 app in England and Wales should benefit from the same arrangement next month.

So how does it work?

If, for example, a user of the Protect Scotland app travels from Glasgow to Belfast and has close contact with someone using the Northern Irish app, they will get an alert if that person later tests positive for Covid-19.

That's because the three territories are using what is described as a federated server, where the details of positive test results can be stored.

Each app user's phone in Northern Ireland, Scotland or Jersey continually queries that server, and if it spots the anonymous record of someone with whom there has been a contact, they should receive an exposure notification. That may send them into isolation.

The interoperability means that users do not have to install another app when they travel. The Scottish government says an agreement has been reached so that the NHS Covid-19 app used in England and Wales will join the federated server in early November. Users of Gibraltar's contact tracing app will join the system at the same time.

The Department of Health in England confirmed that it was working on making the NHS app interoperable.

A spokesperson said: "We are taking a phased approach to deliver this with Scotland, Northern Ireland and Jersey connecting first and the NHS Covid-19 app in England and Wales connecting shortly after, once we have all the necessary technical and security measures in place."

But for now there will not be interoperability between the Irish health service's app and the contact-tracing applications in Scotland, England and Wales.

The Scottish government has also revealed that its app, which has been downloaded 1.5 million times since its launch last month, has sent out more than 10,000 notifications to people telling them they have had close contact with someone infected with the virus and must self-isolate.

The anonymous nature of this and other apps which use the Apple Google toolkit means that it is impossible to know who those people are or whether they have obeyed the instruction.

More than 18 million people have downloaded the NHS Covid-19 app since it was launched. But so far no data has been released about the number of alerts it has sent out.