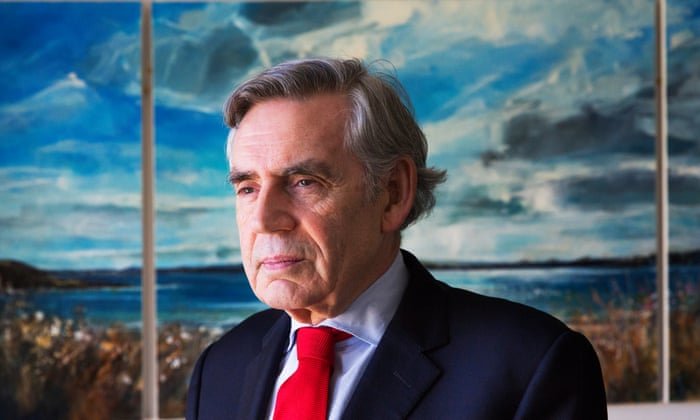 Ex-prime minister calls for a radical alternative to nationalism to stop Scotland seceding and backs calls for elected senate to replace the House of Lords
Only a radical constitutional revolution can stop the union from unravelling and end the alienation felt by voters in the UK’s poorest regions, Gordon Brown warns today.

In a stark warning about the immediate future, the former prime minister even suggests the House of Lords could be replaced with a second chamber that represents the UK’s nations and regions.

Writing in the Observer, Brown argues that the huge election victory secured by Boris Johnson, with big wins in Midlands and northern seats, does not represent “a newfound unity or even an emerging national consensus” but rather a “plea for radical change”.

“If the United Kingdom is to survive, it will have to change fundamentally, so that Scotland does not secede from it and our regions can once again feel part of it,” he writes.

“The risk is that ‘getting Brexit done’ is leaving Britain undone and, by destabilising the careful balance between the Irish and British identities in Northern Ireland, threatening the very existence of the United Kingdom. Outlying nations and regions require new powers of initiative as decision-making centres – which, given our history as a unitary state, would be akin to a constitutional revolution.”

Brown, who in 2014 pushed for the Scottish government to be given more powers should voters reject independence, called for a reallocation of powers that would see some regional cities become “capitals in their own right”.

“We must deliver a radical alternative to nationalism,” he writes. “I would call a constitutional convention, preceded by region-by-region citizens’ assemblies to listen closely to what communities are thinking and aspire to. But a start could be made now with a forum of the nations and regions that will become essential if transferring decision-making powers out of Brussels is not to lead to even more centralisation in Whitehall and could be a forerunner for a very different second chamber.”

Brown, who was Tony Blair’s chancellor, also called on the Treasury to hand over power to the regions to decide how to spend the money allocated to them. His proposals echo a call from Labour leadership contender Rebecca Long-Bailey, who has called for an elected senate to replace the Lords. She has said such an institution should “look at ways to ensure it is representative, with a proportional voting system for elections with a voice for all regions and nations of the UK”.

Brown’s fresh warning about the union comes just days after Johnson formally rejected Nicola Sturgeon’s request to be handed the powers to hold a second referendum on Scottish independence. There are serious concerns within the government that it could become impossible to resist calls for another vote should the SNP win a majority in next year’s Scottish parliament elections.

Johnson told Sturgeon that her request was “unsustainable and self-defeating”. He added: “Another independence referendum would continue the political stagnation that Scotland has seen for the last decade, with Scottish schools, hospitals and jobs again left behind because of a campaign to separate the UK.”

The prime minister has also suggested that he will rule out agreeing to a second referendum, even if the SNP wins a majority in next year’s Scottish parliament elections. Such a move would further heighten tensions. Scottish voters rejected independence by 55% to 45% in 2014. However, the SNP has argued that the Brexit vote and its strong performance at the 2019 election are grounds for a second public vote.

Brown said that different brands of nationalism were working to pull apart the UK and its regions. He writes: “While each nationalism considers itself unique and incontrovertibly powerful, their rise owes far more to common problems shared in every part of the UK: anxieties about stagnating incomes, the rundown of manufacturing, insecure employment, poor-quality public services, boarded-up high streets – a lethal cocktail when combined with a strong sense of cultural loss and of a globalisation that seems akin to a train that has run out of control.”

He says: “Nationalism can exploit these injustices but it cannot end them. And while the Conservatives are the current beneficiaries of the revolt of the regions, their promise of a northern renaissance will have to mean more than love-bombing the regions with a few infrastructure projects and an airline rescue.”
Add Comment