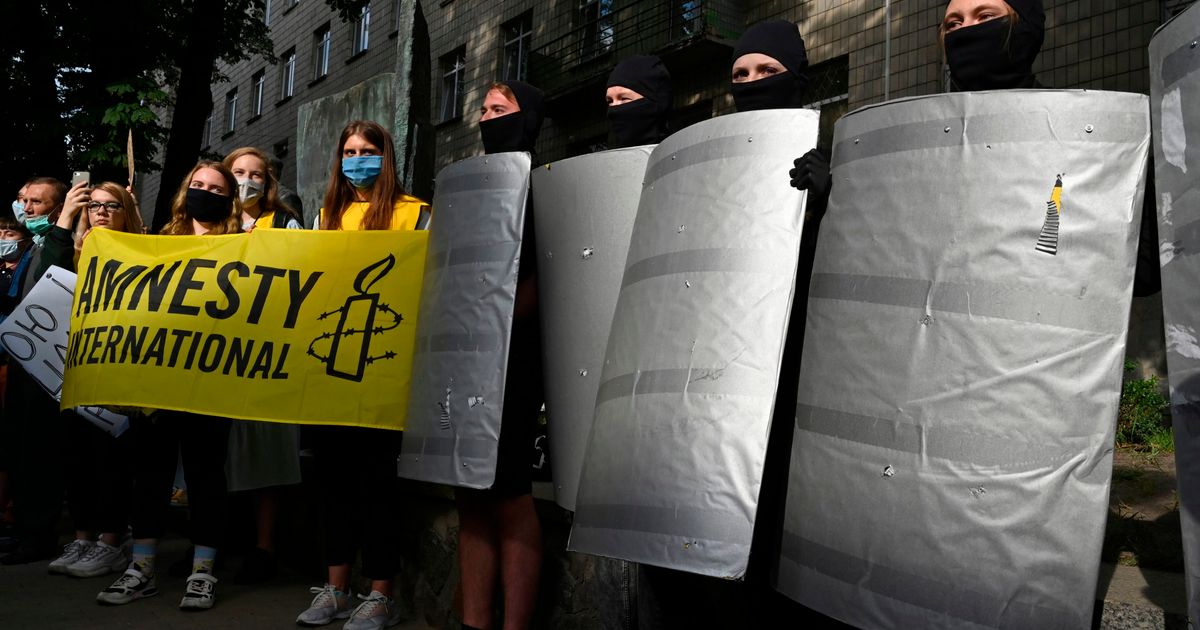 Amnesty International, the global human rights group, is no stranger to controversy.

In its 60 years of shining a light on the darkest corners of man’s inhumanity toward man, the Nobel Peace Prize-winning organization has often offended the powerful and made it more awkward for liberal democracies to ignore their own values when conducting foreign policy.

Today, Amnesty stands accused of “blaming the victims” and acting as Russian President Vladimir Putin’s “useful idiots” because it issued a statement critical of the conduct of Ukraine’s armed forces at a time when the Western-backed democracy is resisting a Russian invasion. But it’s wrong to fault the group for criticizing Ukraine.

Let’s be clear: Amnesty has relentlessly criticized Moscow’s war of aggression on its neighbor, documenting assaults on civilian neighborhoods; gathering evidence of war crimes, torture and disappearances; and denouncing the blocking of humanitarian assistance to civilians in the war zone. Their evaluations prompted the Russian authorities to close the group’s Moscow office in April, along with those of other international NGOs — all dubbed “foreign agents.”

Yet, a single report criticizing the Ukrainian armed forces for endangering civilians’ lives through the way they’ve operated in some residential areas has drawn a firestorm of Ukrainian and Western indignation, prompting the head of Amnesty’s Kyiv office, Oksana Pokalchuk, as well as the co-founder of the Swedish Division of Amnesty International to resign.

Pokalchuk said her local team hadn’t been properly consulted over the report, which unwittingly “sounded like support for Russian narratives” and failed to take the full context of a country being torn apart by invaders into account. “Seeking to protect civilians, this research instead became a tool of Russian propaganda,” she added.

Western critics also recalled that Amnesty had withdrawn its “prisoner of conscience” label from Putin’s most outspoken domestic political opponent Alexei Navalny last year, over xenophobic comments he’d made more than a decade earlier, only to subsequently restore the status after protests.

Some see a pattern here of pro-Russian or anti-Western bias.

As even a cursory glance at Amnesty’s publications on Russia demonstrates, however, this is nonsense. Any reputable human rights organization must apply consistent standards to all the parties in a conflict, without turning a blind eye to the behavior of “our side.”

Western citizens are happy enough to light an Amnesty candle in support of prisoners of conscience in Myanmar, Iran or Cuba. However, the group has been lambasted for criticizing the United States for its use of indefinite detention without trial at Guantanamo Bay in Cuba for terrorism suspects after the 9/11 attacks, and likewise for comparing Israel’s treatment of Palestinians in the West Bank and Gaza Strip to apartheid.

In seeking to use an objective ethical yardstick, Amnesty is facing the same moral dilemmas as reputable international news media.

When I was bureau chief for Reuters in Jerusalem in the 1980s, for example, I endured frequent pressure from supporters of both Israel and the Palestinians over our real-time coverage of the first Palestinian Intifada, a mostly unarmed uprising in the occupied West Bank and Gaza Strip, which erupted in 1987. 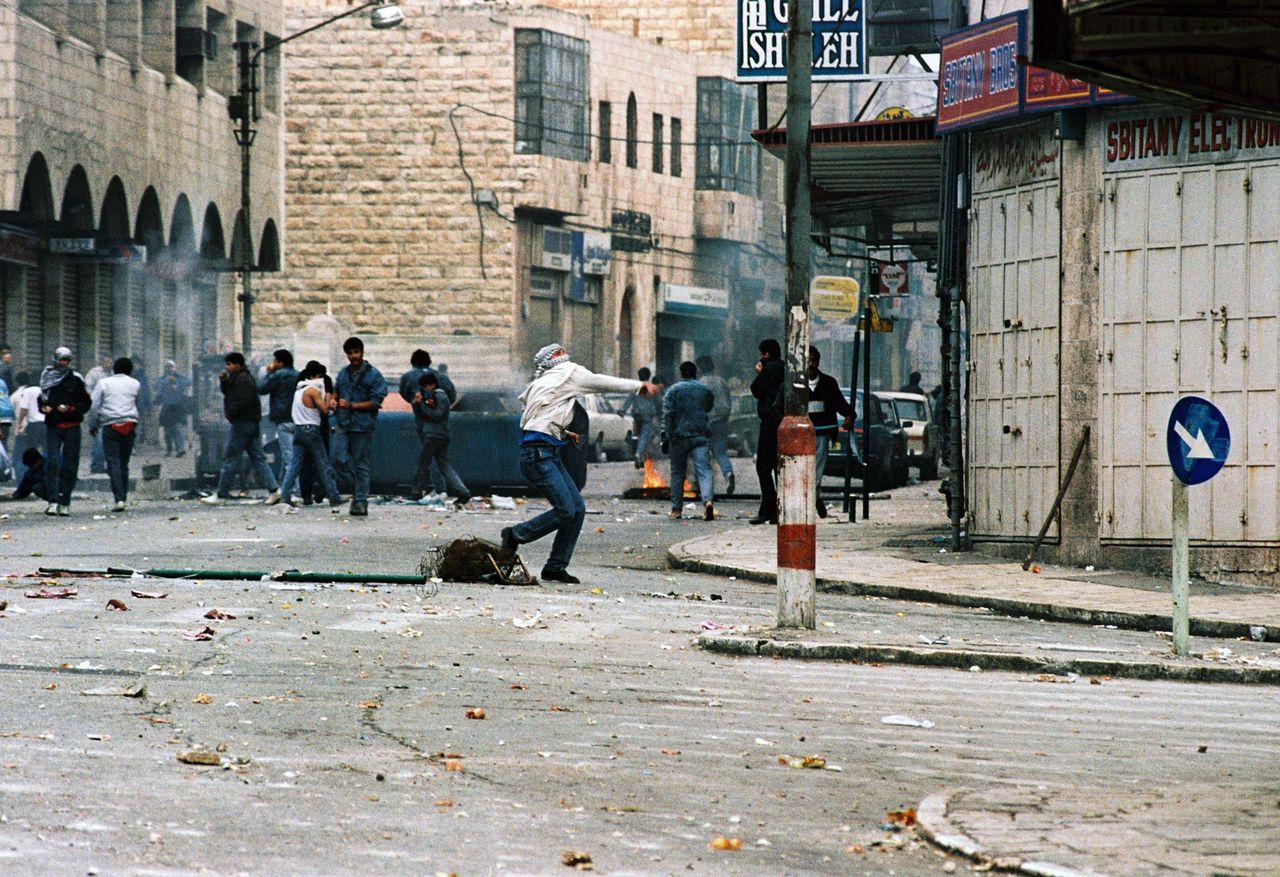 Palestinian demonstrator throws rock during violent protests against the Israeli occupation of the West Bank and the Gaza Strip in 1987, in East Jerusalem

Some accused us of double standards because we were unable to provide similar coverage of repression in tightly sealed Syria or Algeria. We were also accused of creating a false equivalence between the occupiers and the occupied — or between “security forces” and “terrorists” — and of under-reporting on higher casualty tolls in other parts of the world.

Sometimes we were faulted for not letting local staff determine the angle of a story, or for failing to give the authorities enough time to respond before publication — even if that mainly denied them the opportunity to use censorship to silence us, or to denounce us preemptively.

I remember being greeted with denial and accusations of anti-Semitism when I briefed a Jewish delegation visiting from Canada on the situation in Gaza. I invited the group’s members to come to Gaza the following morning to see for themselves. There were no takers.

Amnesty’s report may be politically inconvenient for the Ukrainian government and its allies in the West, but that doesn’t make it wrong or inaccurate. No country, even when under brutal assault from a bullying neighbor, is above reproach.

The organization says its researchers documented multiple cases of Ukrainian forces basing themselves in schools and hospitals and launching attacks from populated neighborhoods, drawing Russian fire that endangered civilian lives. Of course, since Moscow’s forces took the war to the cities from the outset, Ukrainian defenders had little choice but to operate in these urban areas. But Amnesty says they should have done more to evacuate non-combatants.

A mature response to such criticism would be to take the findings seriously and work to improve army practices and the protection of civilians — not shoot the messenger.

President Volodymyr Zelenskyy would have done better to acknowledge that even his heroic defenders are capable of error and take the report to heart, instead of accusing Amnesty of giving “amnesty to the terrorist state and shifting responsibility from the aggressor to the victim.”

Encouragingly, there are signs that Kyiv is now trying harder to persuade civilians to leave combat zones before launching military operations — notably in the Kherson region, where it has issued repeated public appeals to citizens to leave ahead of a likely Ukrainian counteroffensive.

It’s also important to remember that Amnesty International isn’t above criticism either. A 2019 report commissioned after two employees committed suicide found a toxic work culture of bullying, public humiliation, and discrimination at the organization. And in response to the findings, Amnesty introduced a series of internal reforms and decentralized its organization, reducing the power of its London-based international secretariat.

Ukraine should respond to Amnesty’s criticism in a similar spirit. And its Western supporters should want to ensure that the billions in taxpayer money being poured into Ukraine to support its self-defense and keep it financially afloat are being properly spent.

Maintaining public support for Ukraine’s struggle requires a constructive response to criticism from reputable human rights organizations, not trying to muzzle them or discredit their findings.