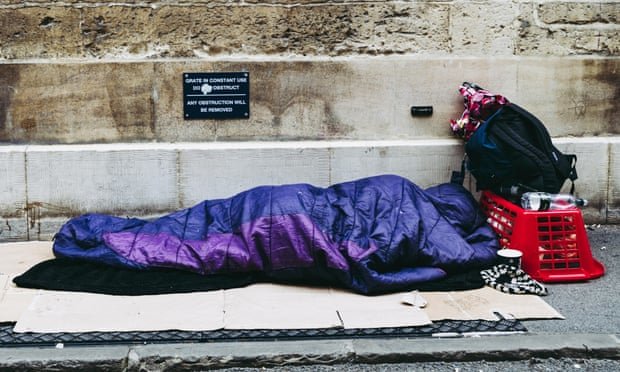 Concerns over lack of strategy to protect rough sleepers from coronavirus

Government urged to provide guidelines as homeless people likely to be more vulnerable
Concerns have been raised that the government has no clear strategy in place to protect homeless people from catching coronavirus.

The homeless charity Crisis, together with the Liberal Democrats, are asking for immediate guidance on how to help rough sleepers who are likely to have pre-existing health conditions that make them vulnerable to the illness.

Advice is also needed on how the self-isolation protocol could work for people who live on the streets and how they can regularly wash their hands, they suggest.

Matthew Downie, director of policy and external affairs for Crisis, said: “People sleeping rough are particularly vulnerable because they are more likely to have a range of existing health conditions and face specific challenges in that they may be unable to regularly wash their hands, nor can they self-isolate if they feel unwell.

“This guidance must set out what measures government is taking to ensure rough sleepers get appropriate health checks, what accommodation will be provided so that people can self-isolate and advice for the public on how best they can support people who are homeless during the coronavirus outbreak.”

The Liberal Democrat MP Layla Moran has written jointly to the housing secretary, Robert Jenrick, and the health secretary, Matt Hancock, to seek clarity and urge the government to act.

Moran suggests that emergency accommodation should be provided so that people can self-isolate. She said: “This government does not appear to have thought about the homeless at all in its management of this emergency. Stakeholders and charities are still waiting for information on what the government is going to do.

“Meanwhile, members of the public do not know what to do if they find a homeless person who they suspect has Covid-19 – they want to help, but don’t know how.”

A government spokesperson said: “We’re well prepared to deal with the impacts for Covid-19. We are already working closely with local authorities to support vulnerable groups including homeless people.

“We’re working closely with the sector and will publish further guidance shortly.”

The Ministry of Housing, Communities and Local Government reported that last year 4,677 people slept outside across the country but council data from freedom of information requests showed almost 25,000 people slept rough in 2019.

In the US, health care officials and charity workers who support homeless people on the west coast are already raising similar concerns that coronavirus could seriously affect communities of rough sleepers.

They have highlighted that they typically have poor access to doctors and a high prevalence of underlying respiratory problems.

Previously there has been a rapid spread of diseases such as typhus and tuberculosis among the homeless in LA because of the likelihood of large numbers of people sleeping close together.

So far there have been no outbreaks of the virus in homeless shelters or encampments in the US.
Add Comment