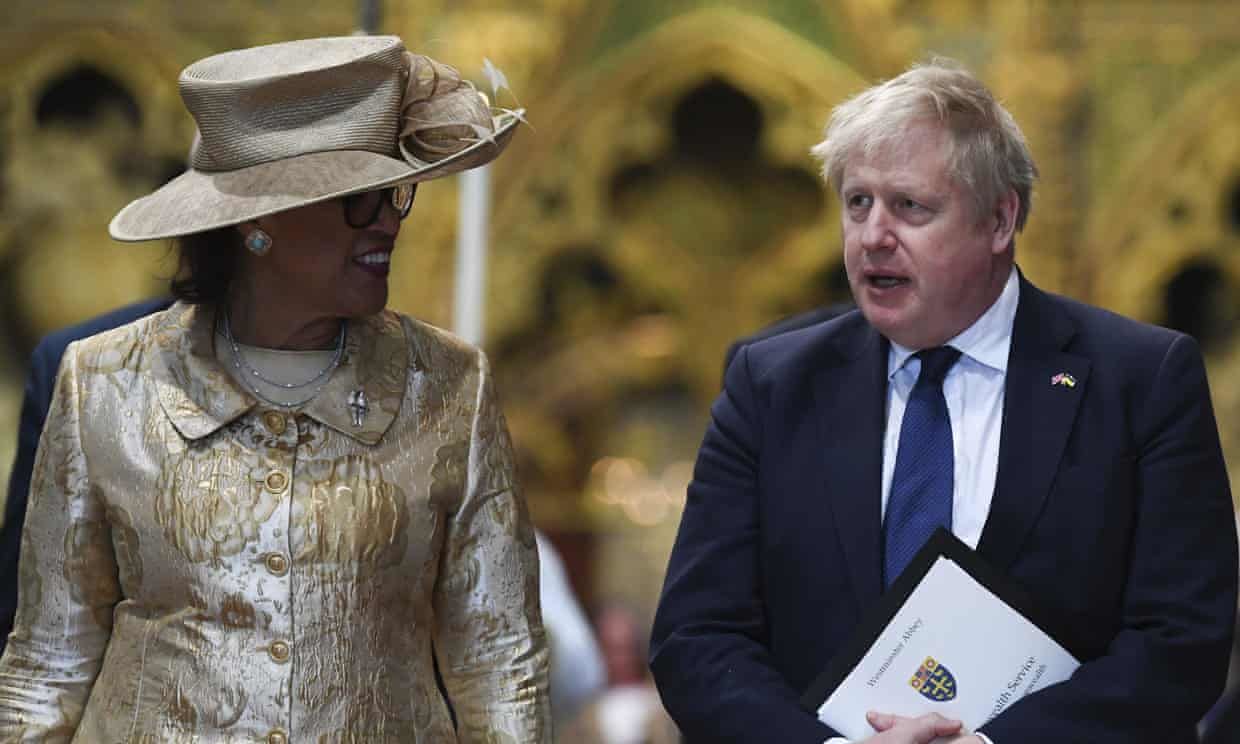 Commonwealth rift in Caribbean as re-election of Lady Scotland challenged

Jamaican minister’s entry to race for secretary general called ‘monumental error’ by Antigua
Patricia Scotland’s hopes of being re-elected Commonwealth secretary general are under threat, after Jamaica’s foreign minister, Kamina Johnson-Smith, announced that she was challenging Scotland for the post.

The decision has sparked controversy in the Caribbean, which had previously met to back Scotland’s bid for a second term. The Antiguan prime minister, Gaston Browne, has described Jamaica’s decision to break ranks as a “monumental error”.

“Jamaica was party to a recent Caribbean Community (Caricom) consensus endorsing the re-election of Baroness Scotland,” he said.

“I think Jamaica’s proposed candidature for Commonwealth secretary general is a monumental error, which could only serve to divide the Caribbean.”

He said the Dominican-born Scotland was being hounded out of office by a group that “have now skilfully engineered a plan to divide Caricom and to stain the performance of the region”.

He said that Jamaica’s tactics might only serve “as a gateway for a non-Caricom secretary general to succeed”.

It has been the convention that a secretary general is not contested if he or she seeks a second four-year term.

The 15-member Caricom had given overwhelming support for Scotland when they met in Belize in March, but that phrasing may have disguised the objections of a minority. Either way, the Jamaican decision on 1 April to announce Johnson-Smith’s candidacy caught most observers by surprise.

One former Jamaican foreign minister, Delano Franklyn, noted his country’s surprise move came after the visit to Jamaica by Prince William and the Duchess of Cambridge, and that visit may have been used as a backchannel to lobby the Jamaican government.

The UK, however, insists it is staying neutral, but supporters of Scotland believe Foreign Office officials have been manoeuvring for years to remove her on the basis it believed she has awarded contracts improperly and proved a poor administrator.

A previous potential challenger, Monica Juma, the Kenyan energy minister and a former diplomat, had announced in August 2021 that she was to stand against Scotland, received Britain’s endorsement and started campaigning. However, she then mysteriously pulled out, leaving Scotland’s opponents without a challenger.

Juma had been endorsed for the top job by President Uhuru Kenyatta last year, who called her “an exemplar of what we in the Commonwealth hold”. The 19 African members of the Commonwealth had only recently, through the African Union, endorsed Juma’s bid, but she clearly could not gain traction in the Caribbean.

In a brochure she released in September, Juma said she wanted to change the perception of the Commonwealth as an organisation of the past. It appears Juma was not receiving sufficient support across the 54-member Commonwealth and it was agreed that she stand down to find a candidate more likely to defeat Scotland.

The Commonwealth summit is supposed to reach a decision by consensus and the royal family will not want an unedifying row at what may be one of the Queen’s last summits. Judging by her recent public appearances, she is unlikely to attend in person.

Jamaica’s decision to put up a candidate has its ironies since the country had previously hinted that it was considering quitting the Commonwealth or removing the Queen as head of state. However, its prime minister, Andrew Holness, in announcing Johnson-Smith’s candidacy, praised her qualifications for the post of secretary general, including her high moral character, diplomatic and political acumen, proven competence and commitment to the work of the Commonwealth.

“She will bring a wealth of experience to the position and is committed to international public service,” he said.

Johnson-Smith, foreign minister since 2020 and a former barrister, said on Twitter: “It would be an absolute privilege to serve this great family of nations.”

President Paul Kagame of Rwanda was due in Jamaica this week, where the post of secretary general is bound to be discussed. The delayed Commonwealth heads of government meeting was initially due to be held in 2020, but that has twice been postponed due to Covid, meaning Scotland’s term has already been extended.

Scotland, a former Labour frontbench politician and member of the House of Lords, has been dogged by stories in the UK accusing her of a misuse of funds, including an internal auditor’s report that suggested normal procedures had not been followed in the award of a management consultancy contract to a fellow Labour peer. She has always denied any wrongdoing.
#Prince William  #Boris Johnson  #Johnson  #Covid
Add Comment