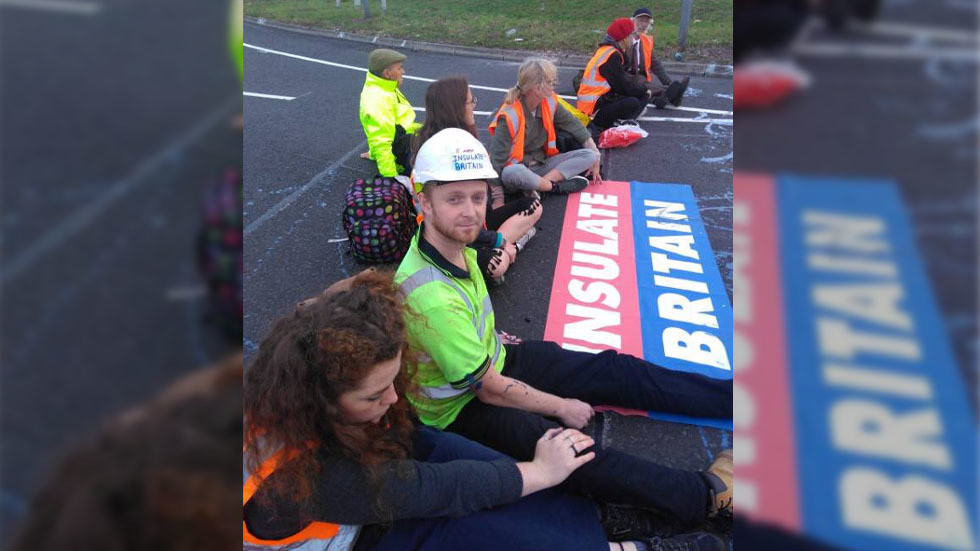 Climate activists belonging to environmentalist group Insulate Britain have blocked slip roads and the motorway of the M25 London orbital for the fourth time in a week, once again causing disruption.

On Monday, Insulate Britain returned to the busy motorway to demand that Prime Minister Boris Johnson and his government improve insulation in housing, which they see as a crucial step in addressing climate change.

The group tweeted a photo showing a handful of its members sat in a line blocking a road, with the organisation’s logo painted onto the tarmac. Another image purported to show the words ‘Insulate Britain’ and a heart on a junction, while another depicted a protester’s hand with the word ‘glue’ in a blue liquid.

One image uploaded by a Twitter user showed a snapshot from a traffic monitoring website of heavy tailbacks at a junction of the M25. A video of a disgruntled motorist purported to show a man shouting at some of the protesters and criticising them for their tactics, saying that the group was causing more pollution and creating animosity with the British public.

Footage on the social media platform showed police in Kent detaining demonstrators for their attempts to block the M25 in Dartford. A spokesman for the county’s law enforcement said that 12 people had been arrested on the grounds of “conspiracy to cause public nuisance.”

Meanwhile, Hertfordshire Constabulary said in a statement that its officers had arrested 29 people in relation to the protests. “Several” people detained at two sites at Junction 18 (Chorleywood) and Stanborough Interchange had glued themselves to the motorway’s carriageways. In total, the police force has made 76 arrests over the last week connected to the demonstrations in the county alone.

The climate change group kicked off its protests last Monday and has since caused disruption to the capital’s busy M25 orbital, drawing ire from the public and commuters alike.

London was hit with a two-week demonstration between August and early September by another climate group, Extinction Rebellion, which demanded climate action from the British government. The fortnight of protests resulted in hundreds of arrests.