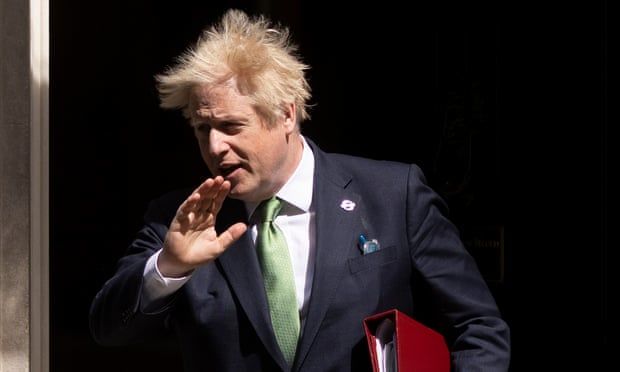 The Metropolitan police came under intense pressure to explain how it reached its conclusions after Downing Street said officers confirmed no further action would be taken against the prime minister despite him attending gatherings for which others were fined.

The Met’s four-month £460,000 investigation has concluded, paving the way for the publication of a full report by the senior civil servant Sue Gray next week. Her preliminary report found “failures of leadership and judgment by different parts of No 10 and the Cabinet Office”.

A former Met chief said the force was open to claims it had bungled the investigation unless it took steps to explain itself.

Brian Paddick, now a Liberal Democrat peer, said: “The Met has no defence to the accusation that it gave the prime minister one fixed-penalty notice (FPN) as that was the minimum he could be fined, but did not do so for other events for political reasons,” he said.

“The decision not to explain is a mistake. It was a mistake not to investigate in the first place. They said there was no need to investigate and then they issued 126 fines, which is not good for their credibility.”

The 126 fines were issued to 83 people – 35 men and 48 women – with at least one person receiving five FPNs, the Met said. The fines, typically £50, covered events held on eight separate dates.

Officials who were among those fined were struggling to understand how Johnson could have escaped further censure. He, his wife, Carrie, and the chancellor, Rishi Sunak, received one fine each for celebrating the prime minister’s birthday in June 2020 when indoor gatherings, except for work purposes, were banned.

One Whitehall source pointed out that junior civil servants had received FPNs for going to at least one event which the prime minister not only attended but also gave a speech at. Another said: “It’s the twentysomethings I feel sorry for – who went to events that were their seniors’ leaving bashes and things.”

A former No 10 staffer said during the Covid pandemic it was usual for Johnson to wander over to officials sharing a drink while praising them for “letting off steam”.

One official said another source of resentment was the fact that evidence presented in good faith to Gray by junior officials was handed to police, while more senior figures declined to cooperate.

“Some people worry that they ended up being penalised because, before the police were even involved, they tried to help with the report, when others who stood back maybe got away with it.”

There is widespread anger at the cabinet secretary, Simon Case, who was described by one Whitehall insider as a “submarine” who had offered no leadership or counsel throughout the crisis. “People trusted their bosses and they got fined, you’d think someone might acknowledge that at some stage,” they said.

Some officials believe Case should have shouldered part of the blame for the culture that developed in No 10 during lockdowns – and as the most senior civil servant, should have spoken up for junior staffers caught up in the inquiry.

Mike Clancy, the general secretary of the Prospect union representing civil servants, said: “The scale of these breaches of the law is clearly symptomatic of a deeply damaged culture at the heart of Downing Street. Ministers in this government are far too quick to blame officials when it is they who are responsible for taking the lead when it comes to setting that culture.”

Civil servants were contacted on Wednesday by a cabinet official liaising with the Met, who acknowledged it was a “challenging time” and warned that a “small number” of the 126 fines remain to be issued in the coming days.

Johnson is not expected to give his own response to the completion of the Met’s investigation until Gray publishes her full report.

Officials say it remains possible the final report could include photographs used as evidence but these are unlikely to be of parties in progress, or show individuals.

A decision also had yet to be made on naming any individuals involved, although if this happened, it would only be for people at senior grades.

A source said the report, which was being updated before being sent to lawyers, would be sober in tone: “I don’t think there will be any salacious details not heard before. It will be quite dry, but it will set out the facts, and people can assess those as they choose.”

Conservative backbenchers who previously called for Johnson’s removal say next week will be a moment of truth for colleagues who have withheld judgment about his fate. “If Gray’s report is published next week, they’re going to run out of road, and they’re going to have to make a decision.”

Meanwhile the Met will face further questions about its handling of the investigation, said Len Duvall, the leader of the Labour group on the London assembly. “I think the police and crime committee will want to ask questions and understand how the Met have reached their conclusions about the prime minister only getting one fine,” he said.

“I think from the information in the public domain, he [Johnson] has got away lightly. It is for the police to justify why there was just one fine.”

The Met’s acting deputy commissioner, Helen Ball, said the fines were issued for the breaches after detectives scoured more than 500 photos plus emails, CCTV, and door logs to see who was where and when.

“Our view is that these 126 referrals are clearcut. We made sure after a really thorough investigation that clear evidence existed of a breach,” she said.
#Boris Johnson  #Johnson  #Covid
Add Comment