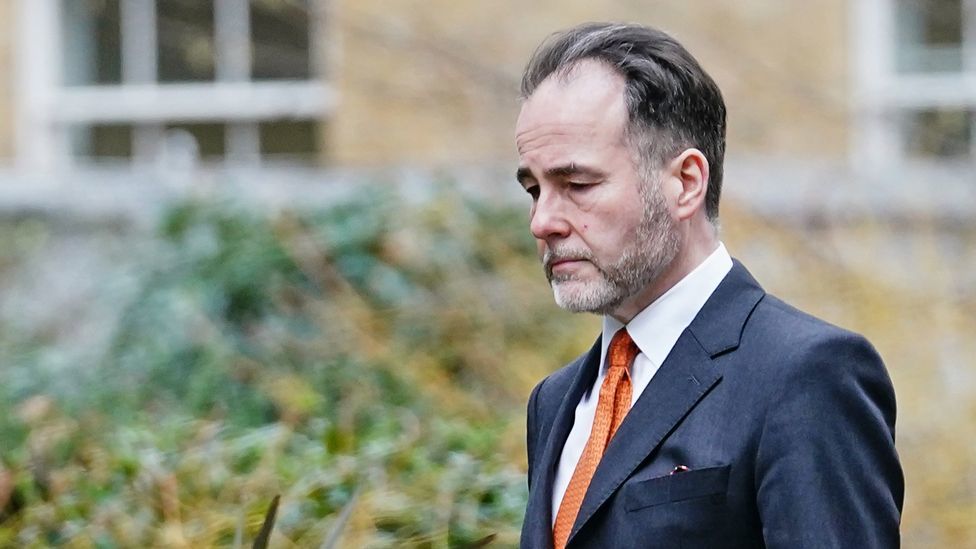 No 10 did not tell the truth when it said the PM was unaware of formal complaints about Chris Pincher's behaviour, the former top civil servant in the Foreign Office has said.
Simon McDonald said the PM had been briefed about an inquiry on Mr Pincher, then a Foreign Office minister.

Asked if this was correct, Dominic Raab, who was foreign secretary at the time, said it was "news to me".

Mr Pincher was suspended as a Conservative MP last week.

Currently sitting as an independent MP for Tamworth, he lost the Conservative whip over allegations he groped two men at the Carlton Club, a private members' club in London. He says he is seeking professional medical support and has denied misconduct.

Downing Street had previously said Mr Johnson was not aware of any specific allegations against Mr Pincher when, in February, he appointed him deputy chief whip - a role in which he was responsible for enforcing discipline among Conservative MPs.

On Monday, the children's minister Will Quince said he had received "a categorical assurance that the prime minister was not aware of any specific allegation or complaint made against the former deputy chief whip".

However, later that day, BBC News revealed that the prime minister had been aware of a formal complaint about the MP.
Now, in a strongly-worded letter to the parliamentary standards commissioner, Lord McDonald has disputed No 10's version of events.

In his most stinging line of all Lord McDonald likened Downing Street statements to "telling the truth and crossing your fingers at the same time and hoping that people are not too forensic in their subsequent questioning".

Day by day this means ministers are being sent out with lines to take that disintegrate within hours of them being said out loud - not only humiliating for the ministers concerned but toxic for trust in the leadership of the party, and the country.

And bubbling away underneath, increasing exasperation, from the Cabinet down, within the Conservative Party, of the ongoing inability of No 10 to actually focus on the business of government, rather than constantly fire fighting crises about the prime minister's capacity to tell the truth.

Senior ministers who until very recently, the last 10 days, had assumed Boris Johnson would lead them into the next general election now aren't so sure.

And even those still supportive are worn down by what they see as the persistent own goals from Downing Street, which they regard as hard, even impossible to defend.

Lord McDonald, who was the Foreign Office's most senior civil servant from 2015 to 2020, said that in the summer of 2019, a group of officials had "complained to me about Mr Pincher's behaviour".

"In substance, the allegations were similar to those made about his behaviour at the Carlton Club."

He said an investigation upheld the complaint adding that: "Mr Pincher apologised and promised not to repeat the inappropriate behaviour."

"Mr Johnson was briefed in person about the initiation and outcome of the investigation," he added.

Speaking to BBC Radio 4's Today programme, Mr Raab said: "I have discussed this with the prime minister over the last 24 hours, it is not my understanding that he was directly briefed."

"In relation to the 2019 allegation or complaint, whilst there was inappropriate behaviour, it didn't trip the wire into disciplinary action," he said.

He said he informed the chief whip, who at the time was Mark Spencer, about the investigation, but not the prime minister.

Asked if somebody else had told Mr Johnson, Mr Raab said "that is news to me" adding that "It is not clear to me that was factually accurate."

Appearing on the same programme shortly afterwards, Lord McDonald defended his assertion saying: "I know that the senior official briefed the prime minister in person because that official told me that at the time.

"Such complaints about ministers are very rare, very sensitive, they are dealt with at the very top level and so I had the help and support of the Cabinet Office throughout the investigation."

He said Downing Street needed to "come clean" adding: "No 10 have had five full days to get the story correct and that has still not happened."

Conservative MP - and critic of the PM - Mark Harper told the BBC's Politics Live that whips were responsible for the pastoral care of their party's MPs and that the appointment of Mr Pincher as deputy chief whip showed "a complete indifference to the welfare and safety of my parliamentary colleagues".

The former chief whip said he was "quite upset" by the situation, adding that it appeared ministers had been "lied to by people in Downing Street before being sent out on to the media".

Labour's deputy leader Angela Rayners said: "It is now clear that the prime minister knew about the seriousness of these complaints but decided to promote this man to a senior position in government anyway. He refused to act and then lied about what he knew."

The Liberal Democrats deputy leader Daisy Cooper said: "Lord McDonald has shone a new light on this murky cover-up. Boris Johnson needs to own up to his web of lies and finally come clean today."

The Commons Speaker has granted Labour's request for an urgent question in Parliament, meaning MPs will be able to press a minister on the issue at 12:30 BST.
#Boris Johnson  #Dominic Raab  #Johnson  #Raab
Add Comment