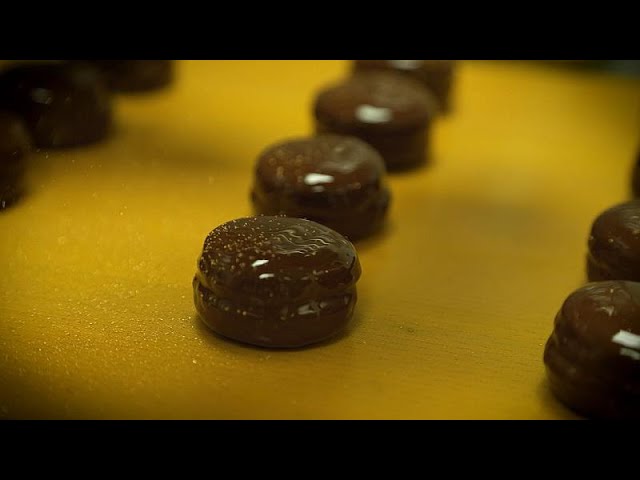 Chocolate, the billion euro industry that tastes good and does good

The cocoa industry is big business, worth billions of euros every year. But is our love for chocolate good for the planet and farmers? We look at how the sector is trying to be more sustainable, fair and teach consumers to be more responsible.

Who doesn’t love chocolate? Lots of us find it hard to resist, which means we are contributing to the more than seven million metric tonnes consumed worldwide every year. All that desire to eat the sweet treat has made the chocolate industry worth over 124 billion euros.

Currently, five million tonnes of chocolate are produced every year. 70 per cent of this comes from the West African countries of Ivory Coast and Ghana.

According to a report published by Fior Markets, the chocolate industry's worth is expected to increase to over 177 billion euros by 2028.

Chocolate may be a hot commodity on the shelves, but investors sometimes have a more cautious appetite. Why? Cocoa’s volatile prices make it a risky bet.

Recently though investing in chocolate seems like an increasingly mouth-watering prospect. Victoria Scholar is the head of investment at Interactive Investor in London. She explains that "commodities overall have done very well lately amid the resurgence in demand as we come out of the pandemic." According to her, supply has been outstripping demand, "but those dynamics are shifting." Weather-related issues in Ivory Coast have led to decreases in supply and there's also been a major pickup in demand."

The chocolate industry is big business and for years human rights activists have been demanding that big business trades fairly. Consumers are also increasingly asking to eat ethically-harvested chocolate.

To add to this, mega global threats like COVID-19 and climate change are also having an impact on the road ahead for the cocoa market.

Jacques Torres is a world-famous chocolatier. He is an award-winning pastry chef and has been in business for five decades. As well as having his own line of chocolate, he is also a head judge on the Netflix series 'Nailed It!'

He believes that problems confronting the industry can be turned into an "opportunity to do something a little bit different", he expects to find solutions to these challenges. To him, listening to customers is essential. "Our customers want new products, they want to explore with us" and that is exactly what he intends to do.

The climate crisis had been a major problem for the cocoa-growing industry, long before the pandemic struck the world. Torres has seen the impact on production countries. He says that cocoa doesn't grow everywhere as it's very fragile, so it's bad when growing countries become too dry or too hot.

He believes there will always be crazy people who love "to immerse themselves into the world of chocolate, but the big uncertainty for tomorrow is maybe the weather."

The effects of climate change could eventually chip away at the chocolate industry's booming profits.

However, French chocolate maker, Valrhona, is one example of a company that’s committed to making its business sustainable from bean to bar.

Valrhona has over 40,000 clients in 85 countries and is trying to develop sustainable relationships with local growers. It is also applying methods like agroforestry and planting trees around the cocoa crops to fight deforestation. The company believes that in this way it's also preserving the quality of the cocoa beans, a way to make sure their products keep selling.

The company also has a chocolate museum in France where, amongst other things, it's trying to make consumers more responsible.

Valrhona is a big business making well over 88 million euros in revenue. How does it really support the communities that do so much of the hard work?

According to Carole Seignovert, head of sustainability at the company, they do three major things. They pay cocoa producers a fair price, they invest in community projects and they make sure the producers protect the environment they work in. The company on a whole is also reducing its environmental footprint.

Consumers and commodity traders are still in love with chocolate and why wouldn’t they be? The industry is set to grow in the coming years, but with thousands of cocoa farmers still living below the poverty line, it’s clear that many more companies need to truly commit to putting people before profit.