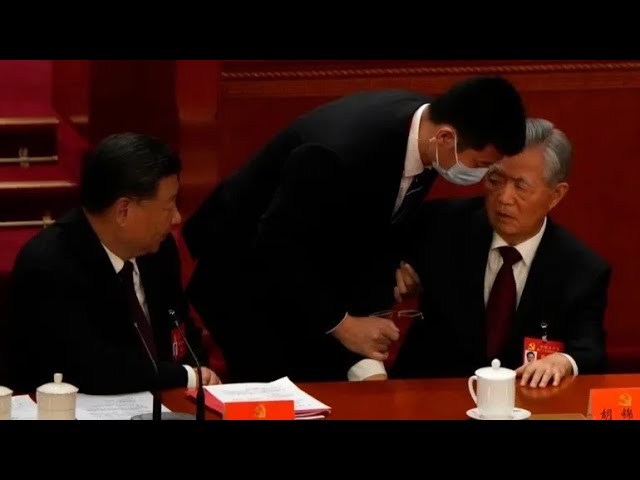 Listen to the article
0:00 / 0:00
Voice by MediaWorks
In perhaps the most dramatic moment of the 2022 Chinese Communist Party national congress, former President Hu Jintao was led by the arm out of the Great Hall of the People on Saturday.
In the closing session of the seven-day gathering, the 79-year-old was forced to leave the session by a steward, as media cameras captured the scene.

When the former President Hu Jintao refused to stand up, the steward uses both arms to pull on the party elder's right arm.

President Xi Jinping, sitting to Hu's right, does not join the effort to remove him.

When Hu Jintao finally stands and leaves his seat, he stops to say brief words to President Xi Jinping, who nods. Then, as he exits, Hu Jintao pats the shoulder of Premier Li Keqiang, his protege from the Communist Youth League, in a friendly way.

Xinhua News Agency reported that he was "not feeling well during the session" and that "his staff, for his health, accompanied him to a room next to the meeting venue for a rest."

The former president had insisted on attending the closing session "despite the fact that he has been taking time to recuperate recently," Xinhua reported, adding that now he is feeling "much better."
Add Comment