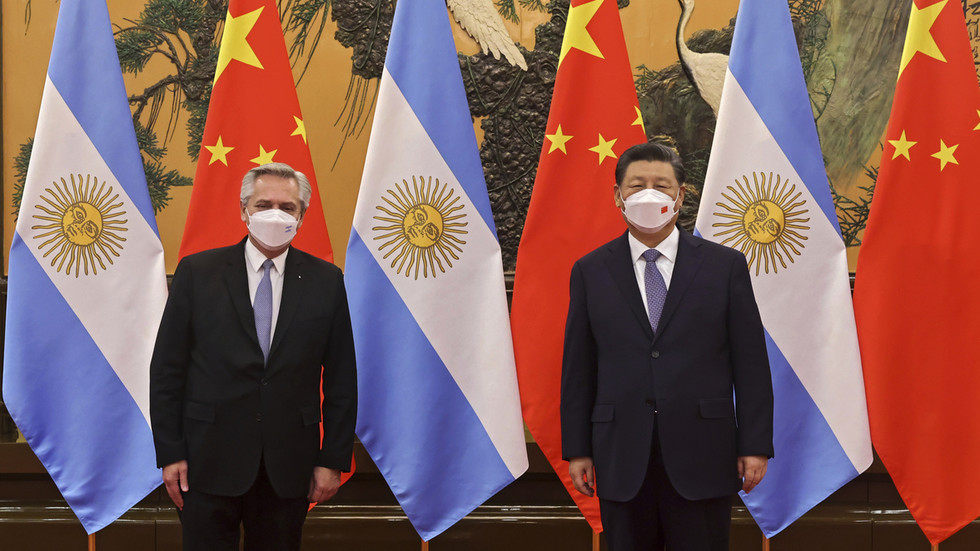 Beijing has put in motion deals with Argentina and Ecuador, two countries the US regards as being in its sphere of influence
The president of Argentina, Alberto Fernandez, recently attended the opening ceremony of the Winter Olympics in Beijing. The next day, he met with Chinese leader Xi Jinping in the Great Hall of the People, where he signed Argentina up to the Belt and Road Initiative, while also penning an $8 billion nuclear power plant deal to be financed and built by Chinese firms.

In a joint statement, both countries also affirmed Argentina's sovereign claims over the disputed Malvinas/Falkland Islands – a gesture which, while not a new position for either country, drew the ire of UK Foreign Secretary Liz Truss on Twitter.

In tandem with this, the president of Ecuador, Guillermo Lasso, was also in town, and, despite his government traditionally being a more US-aligned administration, he later announced talks on a bilateral free trade agreement with China. Despite the absolutely relentless propaganda campaign the Western media has waged against these Games, with wall-to-wall negative coverage, China has nevertheless made considerable diplomatic headway during them.

These movements reveal a growing trend: China is engineering a pivot towards Latin America, one welcomed by many countries in the region. It’s a move that has consolidated as these nations’ long-standing ties with the US and its allies have deteriorated. In the past two months or so alone, China has established ties with Nicaragua and booted out Taiwan, has brought it into the Belt and Road Initiative (BRI), has elevated Cuba's status in the BRI to that of a “strategic energy partner,” has brought Argentina on board, and has pursued free trade talks with not only Ecuador, but Uruguay too. What does this all mean?

As the United States has sought to advance containment against it, China's foreign policy emphasis has been on deepening ties with countries outside the sphere of the West, with no particular focus on any region. It also consolidated its partnership with Russia during Putin's visit to the opening ceremony, accelerated a free trade agreement with the Gulf states, and brought Syria into the BRI too.

China is strategically fortifying the range of its economic relationships in order to put the buffers on the impact of American-led decoupling and more broadly integrate itself into the global economy. The more China wraps up trade deals with others and pushes the BRI forwards, the less political space and clout the US has to harm China. Its expansion of partnerships beyond the Western sphere has been critical.

But in the case of Latin America – traditionally Washington’s backyard – there are other factors at play, too. Whilst some states, such as Cuba and Nicaragua, are seen as political and ideological bulwarks, the push by countries such as Argentina and Ecuador to accelerate ties is also driven by unfavorable economic conditions. South America's recent economic situation has been one of stagnation. Argentina has seen its economy crippled by an enormous fiscal and currency crisis which seen the value of the peso decimated. Since 2018, Argentina's GDP per capita has almost halved, and the country has come under considerable pressure from the IMF.

Ecuador is an oil exporting state with a close relationship to the United States, but it has relied significantly on China as its biggest export market and financier. China's strategy with poorer oil-producing states has been to effectively barter the procurement of oil in exchange for loans and infrastructure investment, as it is currently doing in Iraq.

The US, through its International Development Finance Corporation, has tried to stop this with Ecuador by proposing a deal whereby it will pay off the country’s debt to China in exchange for banning Huawei. But the fact that Lasso has ultimately gone to Beijing, seeking both debt relief and a free trade agreement (obviously intending to sell more oil to China), may indicate that this strategy is failing. Struggling Latin American economies are turning to China because they are disillusioned with the options provided by the US, which has for decades been happy to promulgate gross inequality in its own backyard.

There is an additional political dynamic here, too. Most striking about the China-Argentina joint statement was the inclusion of the Falkland Islands issue. This stance is not new, but it is significant that Beijing was willing to bring it up at this point. It was undoubtedly a diplomatic request from Fernandez as part of the deal to join the BRI. Its inclusion, however, was nonetheless a clear slap in the face for Britain and a knockback for the increasingly aggressive anti-China policy it is pursuing under Liz Truss. It is a signal to Britain that if the United Kingdom continues to push on issues China deems sensitive, such as Hong Kong, Taiwan, Tibet, and Xinjiang, China has diplomatic leverage to hit back by openly backing Argentina's claims to the Falklands/Malvinas, emboldening Argentina in the same way anti-China sentiment has emboldened Taiwan, creating geopolitical difficulty for the UK.

This is why the relationship between Buenos Aires and Beijing is not just described as economic, but also strategic. It is similar to China's relationship with Pakistan, forged on an overlapping area of interests in pushing back against a common adversary.

Britain proceeded to react with shock and outrage at this development, but this is ultimately and inevitably a direct product of the international environment it has created alongside the US. When you create geopolitical friction, other countries will utilize that friction in pursuit of their own interests, and in Argentina's case, they are doing just that. If Britain had not decided to jeopardize its relationship with China at America’s request, then Beijing would have been more restrained.

The changing geopolitical realities have accelerated China's ties with the countries of Latin America. Although traditionally a bastion of US hegemony, a deeply uneven economic order has created an entry point for Beijing. Its Belt and Road Initiative offers countries there a different path, away from decades of unsuccessful neoliberal policies, and that's why two South American leaders made their way to Beijing.

While the Winter Games go on, so do the political games. In the space of just a few days, it seems clear where the gold medal for seizing the diplomatic initiative is heading.

Oh ya 184 days ago
Maybe the US should now understand how Russia feels about the Ukraine. Or how the US would feel if Russia was moving into Mexico
View all comments (1)Add comment