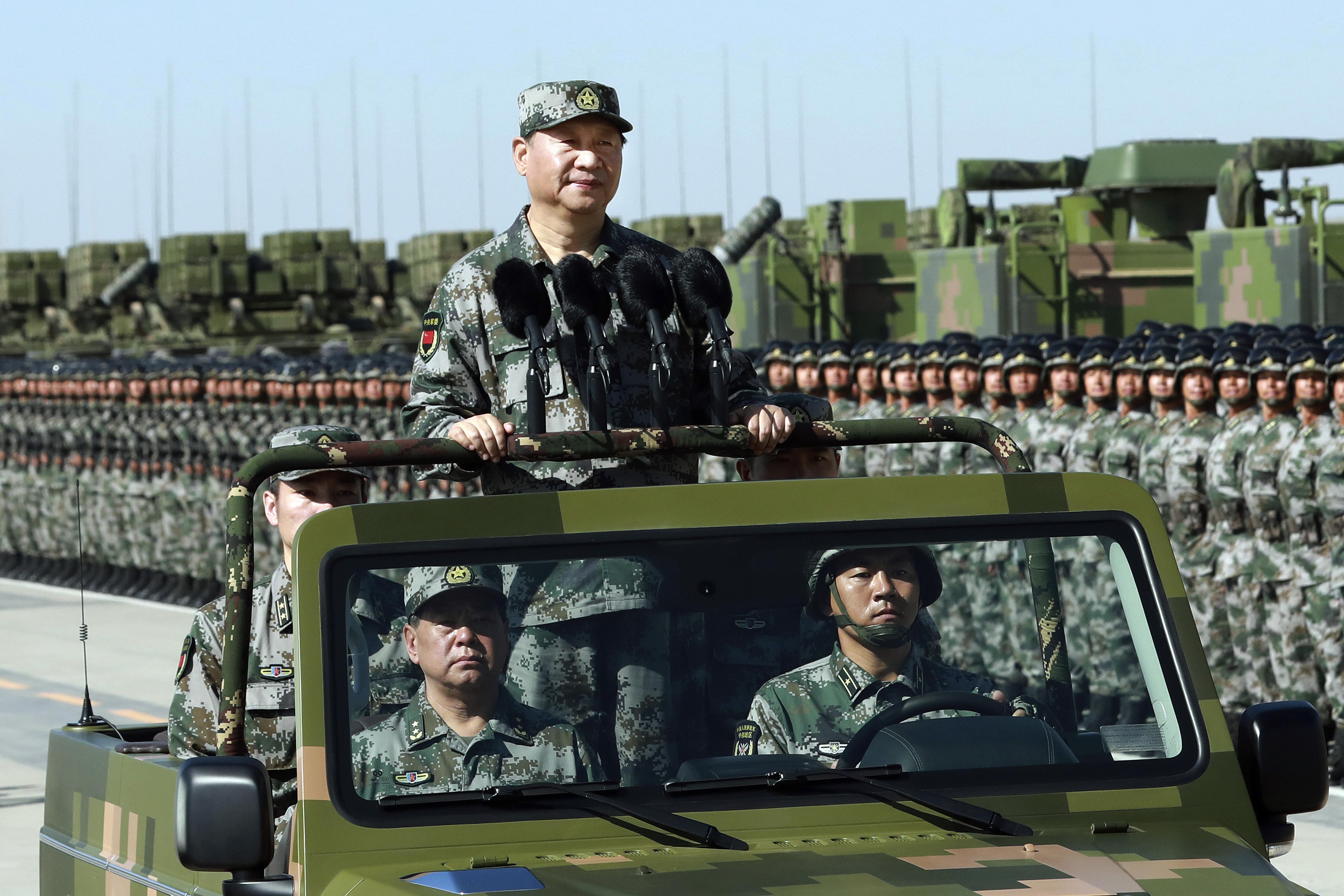 China’s military is rapidly expanding the ability to project power globally and in the coming decade will be capable of waging war far from the homeland, according to a major congressional report.

The People’s Liberation Army has made recent advances in missiles, bombers, transport aircraft, at-sea replenishment and logistics in ways that “significantly improved the PLA’s ability to project power and deploy expeditionary forces far from China’s shores,” the U.S.-China Economic and Security Review Commission concluded Tuesday in its annual report.

“China’s power projection capabilities are developing at a brisk and consistent pace, reflecting the civilian leadership’s determination to transform the PLA into a global expeditionary force in a matter of decades,” the report’s authors said. “By mid-century, the PLA aims to be capable of rapidly deploying forces anywhere in the world.”

China’s growing military might is most advanced in East and Southeast Asia but is moving quickly into the Indian Ocean and as far as the Caribbean and South America.

Carolyn Bartholomew, co-chair of the commission, told reporters during an online meeting on the release of the report that research, including testimony from American intelligence officials, revealed that China over time intends to project military forces far beyond the Indo-Pacific region.

“Within the next 10 to 15 years, Chinese leaders aim to be capable of fighting a limited war overseas to protect its interests in countries participating in China’s Belt and Road Initiative,” she said.

The ruling Communist Party’s adversarial approach toward the United States reached new levels of intensity this year “as China’s leaders have grown increasingly aggressive and antagonistic,” she said, and Beijing is no longer even pretending to abide by international laws and norms.

The 587-page report examines Chinese economic and security threats and makes several recommendations for Congress to counter the challenges. However, the report’s most detailed section focuses on China’s increasing military reach, which involves advanced missiles, warships and warplanes, along with a logistics and basing system stretching from China’s coasts to Southwest Asia, Africa and South America.

The increasing capacity “now presents a serious threat to U.S. allies in East and Southeast Asia, with whom the United States has defense treaties or is required to defend as a result of other security obligations,” the report said.

Any U.S. military response on behalf of allies in the aftermath of a PLA attack must prepare for “the possibility of a costly and protracted conflict,” the report said. “Moreover, growing PLA capabilities will enable the force to contest U.S. interests across the globe.”

“It may not be so farfetched to imagine the PLA someday deploying to defend [Belt and Road] infrastructure, support Beijing’s preferred elites in a coup on an island nation, or prop up authoritarian allies.”

The report also warned that Chinese companies operating in the United States may be buying elements for the PLA logistics network that would enhance Beijing’s military power and ability to wage war overseas.

In the Western Hemisphere, China is seeking military bases and access that could be used to disrupt or distract the U.S. military during a conflict in Asia.

China also is building up space warfare and cyberattack capabilities as part of its global power projection. The report cited the case of a Chinese satellite tracking station in Argentina, built ostensibly for civilian use, that could identify American satellites for targeting by the PLA’s anti-satellite warfare missiles and lasers.

Although retaking the island of Taiwan remains a priority, China’s global ambition is to have the military resources to secure assets and Chinese nationals posted overseas and to protect its access to foreign markets, natural resources and advanced technologies, the report said.

The report warned that significant increases in Chinese military training and patrols near Taiwan are part of intensifying military pressure on the independence-leaning government in Taipei. Recent military flights and warship transits north of Taiwan “suggest the PLA could attack Taiwan from the north or the east, compounding the threat of an invasion on the island’s western side,” the report said.

China also has stepped up aggressive military activities near Japan’s Senkaku Islands, which Beijing claims are part of China.

“China has considerably increased the number of aircraft operating near Japanese territory, ramping up military pressure on Japan during peacetime and improving the PLA’s ability to carry out a range of potential campaigns involving the seizure of the Senkakus,” the report said.

Larry Wortzel, a member of the congressionally authorized commission, said China’s power projection is most pronounced in Asia but is expanding with the growth of China’s military capabilities.

“Those challenges will increase as China masters [weapons] technologies for which the U.S. has been very slow to develop defenses,” he said, including space weapons capable of knocking out satellites, cyberweapons that can disrupt battle management networks and hypersonic missiles that can strike targets rapidly.

One key indicator of China’s growing military strength is the development of the Y-20 military transport, which the PLA deployed in response to the COVID-19 outbreak.

The Y-20 is based on U.S. C-17 transport technology stolen from Boeing Co. during a PLA hacking operation in 2010, according to court documents in the case of Chinese agent Su Bin, who was convicted of the document theft.

The C-17 is the workhorse of U.S. military power projection, and nearly 300 have been built.

China has only 10 Y-20s, first introduced in 2016, but also is using American-made Boeing 777s for military transports, according to the report. The low number of Y-20s currently limits the reach of the PLA’s expeditionary forces, but China is rapidly building more and could have 100 to 400 by 2030, the report said.

China’s precision strike capabilities are improving by the day and will be the “key enabler” of power projection, the commission survey said. China’s force of 1,300 ballistic and cruise missiles already poses a major threat to U.S. forces that would respond to American allies in the region.

China’s first hypersonic missile, the DF-17, was disclosed last year. It has a maximum range of 1,500 miles and “would play an important role in a regional contingency and may already have entered service with PLA operational units in 2020,” the report said.

For its overseas basing network, China has a two-track strategy of using purely military bases and some of the 94 Chinese-owned civilian ports around the world that can double as military facilities.

Its current military bases outside China include just one traditional base at Djibouti, on the Horn of Africa, and new military facilities on disputed islands in the South China Sea.

Beijing planners are considering sites for additional bases, possibly in places such as Cuba and Venezuela, the report said.

A land base for the Chinese military is expected to be set up in Cambodia, which could further shift the balance of power in the region in favor of Beijing. Cambodian officials say the PLA will soon be given access to the country’s Ream naval installation on the Gulf of Thailand, near the massive Chinese-financed Dara Sakor resort and commercial project where China is building an airport.

“If China is able to deploy fighter jets from Dara Sakor in the future, it would enable the PLA to contest U.S. air superiority over the Malacca Strait and into the eastern Indian Ocean,” the report said.

Commission co-Chair Robin Cleveland said China faced its first economic contraction since the 1970s this year as a result of the COVID-19 outbreak but has continued its large-scale theft of intellectual property and data. Ms. Cleveland warned that U.S. investment could be used to bail out sectors of the Chinese economy.

The commission recommended that Congress legislate reciprocity for the bilateral relationship and challenge Beijing’s efforts to exploit the United Nations to support its international economic policies.

The panel also called for making the director of the American Institute in Taiwan the de facto ambassador to the island democracy, a Senate-confirmed position.
#COVID-19  #Covid
Add Comment