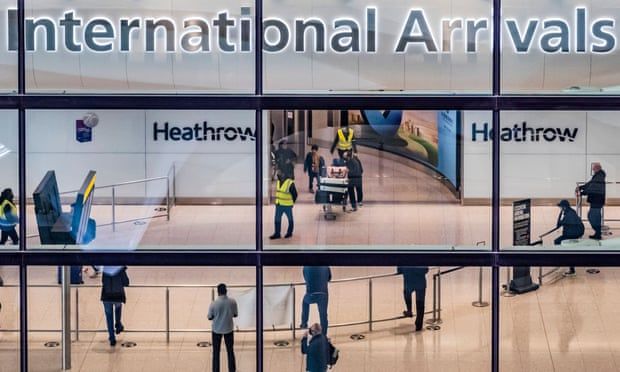 Children ‘not expected to quarantine’ if amber-list rules are relaxed

Children and double-jabbed adults will not have to isolate under proposals, say sources

Children will not be expected to isolate if new rules are introduced that could spare double-jabbed travellers quarantine when they return from amber-list countries, government sources say.

Ministers are expected to discuss the plans at a meeting of the cabinet’s Covid-O committee, likely to be held on Thursday, where they will hear the latest scientific advice about when vaccination rates will be high enough to consider loosening quarantine requirements.

If agreed, the plan could be announced on that day. It could come into force in late July, but government sources said August was more likely – potentially opening up the possibility that families could visit relatives in amber list countries during the school summer break.

Vaccination has not yet been extended to under-18s. One Whitehall source said they would “certainly expect” children to be exempt from the new regime – they would not need to be double-jabbed to avoid quarantine – to avoid the sense that families were being discriminated against. 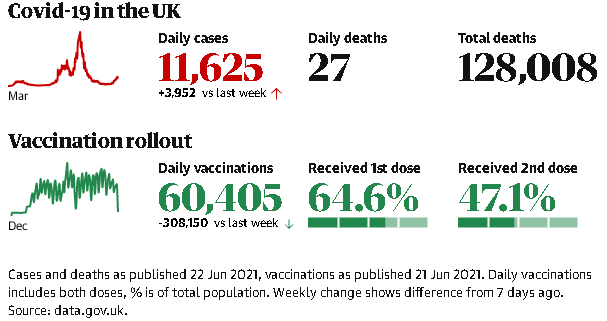 Matt Hancock confirmed that ministers are considering how to scrap the requirement for people to isolate for 10 days on return from a country on the amber list. The health secretary added he was is “in favour of moving forward in this area”.

However, both Hancock and Boris Johnson have stressed that UK holidaymakers should generally plan to stay in the UK this summer in a bid to protect the vaccination programme against new variants.

On Monday, it was reported that one in 200 people travelling from amber list countries were testing positive for the virus, with no positive cases being brought in from people arriving from 151 of the 167 countries on the amber list.

Johnson said earlier this week it would be a “difficult year for travel … There will be hassle, there will be delays, I am afraid, because the priority has got to be to keep the country safe and stop the virus coming back in.”

Changes to the red, green and amber lists are also expected to be announced on Thursday, and to come into force early next week – though few additions to the green list are anticipated, with Number 10 determined to avoid any further delay to the final stage of the reopening roadmap.

Travel industry experts have said low cases rates in some destinations should mean that travel could recommence to Malta, Poland, Finland, Grenada and Barbados in relative safety.

There are currently 11 countries on the green list where travellers do not have to quarantine in the UK on return but none are viable holiday destinations, either requiring Britons to quarantine on arrival in the country, like Australia or Singapore, or places inaccessible by conventional flight routes, such as the Falkland Islands or South Georgia.

Last week Jersey said all of England was red from 29 June, because of increasing cases of the Delta variant, though there are exemptions for those who are fully vaccinated or are under the age of 18.