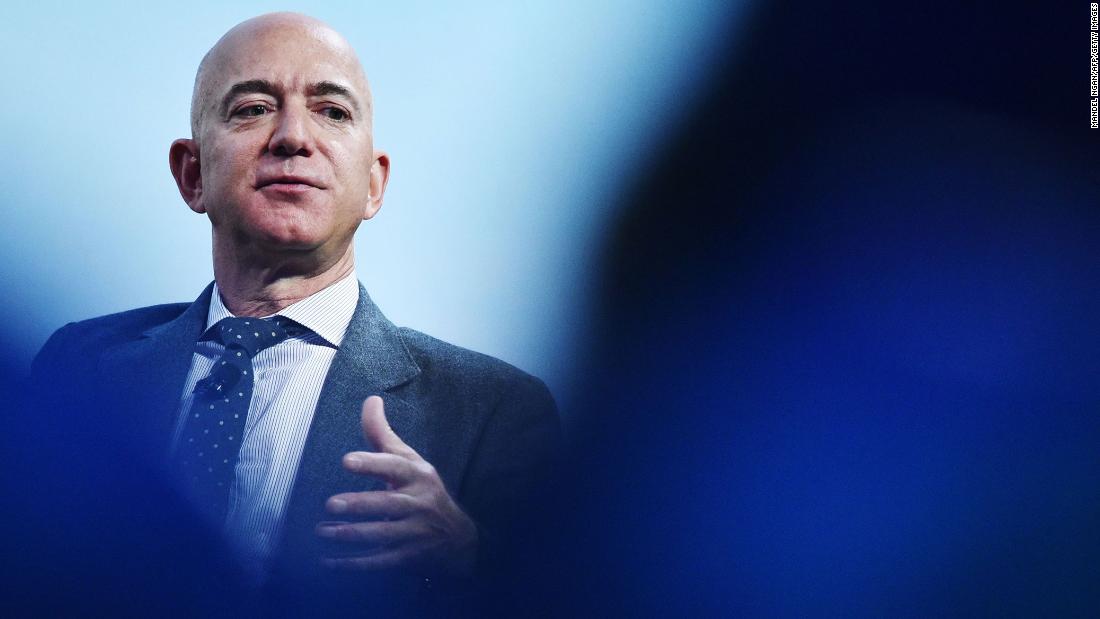 CEOs like Jeff Bezos are grappling with new political realities

The political forces governing Washington have changed dramatically this year, with Democrats in control of both the White House and Congress. That's forcing some of the country's most powerful corporations to rethink their approach to contentious policy debates.

What's happening: Amazon (AMZN) CEO Jeff Bezos has announced that the company is "supportive of a rise in the corporate tax rate" as President Joe Biden pushes an ambitious infrastructure package. To help pay for the bill, Biden has proposed raising the corporate tax rate to 28% from 21%.

"We support the Biden administration's focus on making bold investments in American infrastructure," Bezos said. "We recognize this investment will require concessions from all sides — both on the specifics of what's included as well as how it gets paid for."

It's a notable announcement — especially given that Amazon has been criticized for paying little or no income tax in recent years. The company reported a US federal tax liability of $1.8 billion in 2020, compared to net income for the year of $21.3 billion.

Amazon's willingness to increase its tax burden comes as the company has been forced to play defense on a number of other fronts.

The online retailer has clashed with lawmakers in recent weeks over a union vote at an Amazon warehouse in Bessemer, Alabama. Ballots are still being counted, but the vote could mark a huge win for organized labor and upend how the company engages with hundreds of thousands of US workers.

It also needs goodwill given bipartisan momentum for greater regulation of Big Tech firms. Like Facebook (FB) and Google (GOOGL), Amazon faces scrutiny for alleged anti-competitive conduct. Its growth during the pandemic may only have increased the size of the target on its back.

Step back: Businesses are gearing up for a booming post-pandemic economy that's expected to lift earnings and spur growth. JPMorgan (JPM) CEO Jamie Dimon, who released his widely-read letter to shareholders on Wednesday, told my CNN Business colleague Matt Egan that he hasn't been this optimistic about the US economy "for a long time."

But executives are also navigating a tricky set of factors that could affect their business — making higher taxes just one bullet point on a long list of concerns.

In his shareholder letter, Dimon wrote that America is "clearly under a lot of stress and strain" thanks to the pandemic, racial inequality, the rise of China and "the divisive 2020 presidential election, culminating in the storming of the Capitol and the attempt to disrupt our democracy."

The influential Business Roundtable has pledged to fight higher corporate taxes, which it claims will make US companies less competitive. But it's noteworthy that Amazon has decided to direct its focus elsewhere.

The massive run-up in the price of cryptocurrencies has been a huge win for Coinbase, which is set to make its public market debut next week.

The latest: The digital currency exchange estimated Tuesday that it brought in $1.8 billion in revenue during the first three months of the year. That's up from $1.3 billion for all of 2020.

Between January and March, the price of bitcoin — the most popular crypto coin — jumped from less that $30,000 to more than $58,000, while the price of ethereum more than doubled.

Watch this space: California-based Coinbase is the highest profile company in the crypto space to go public, and its direct listing on the Nasdaq, which is scheduled for next Wednesday, is getting lots of attention.

But regulation of the crypto space remains a big risk. Last month, Coinbase reached a $6.5 million settlement with the Commodity Futures Trading Commission over claims it delivered false or misleading information about transactions and that a former employee made manipulative trades.

"We are subject to an extensive and highly-evolving regulatory landscape and any adverse changes to, or our failure to comply with, any laws and regulations could adversely affect our brand, reputation, business, operating results, and financial condition," the company warned in filings with the Securities and Exchange Commission.

The pandemic has fed a resurgence in the popularity of trading cards, with the hobby attracting both a new wave of young adherents and a stream of professional investors hunting for returns.

That's been good news for the 83-year-old Topps, whose brand is synonymous with baseballs cards and bubble gum. On Tuesday, the company announced plans to merge with a special purpose acquisition company, or SPAC, my CNN Business colleague Paul R. La Monica reports.

The deal would value Topps at $1.3 billion.

Topps has been a publicly-traded company several times throughout its many decades in business. Most recently, it was taken private in 2007 by an investment firm run by former Disney CEO Michael Eisner. That deal was worth $385 million.

The scene: I wrote a deep dive on trading card mania earlier this year — and the hype hasn't abated. Last week, a 2000 autographed rookie card for Tom Brady sold for nearly $2.3 million at auction.

The industry has also received a boost from the craze over non-fungible tokens, or NFTs. Topps recently expanded its business to sell digital editions of its player cards, each with a unique digital token built on blockchain technology. That creates a scarcity that makes them more valuable to collectors.