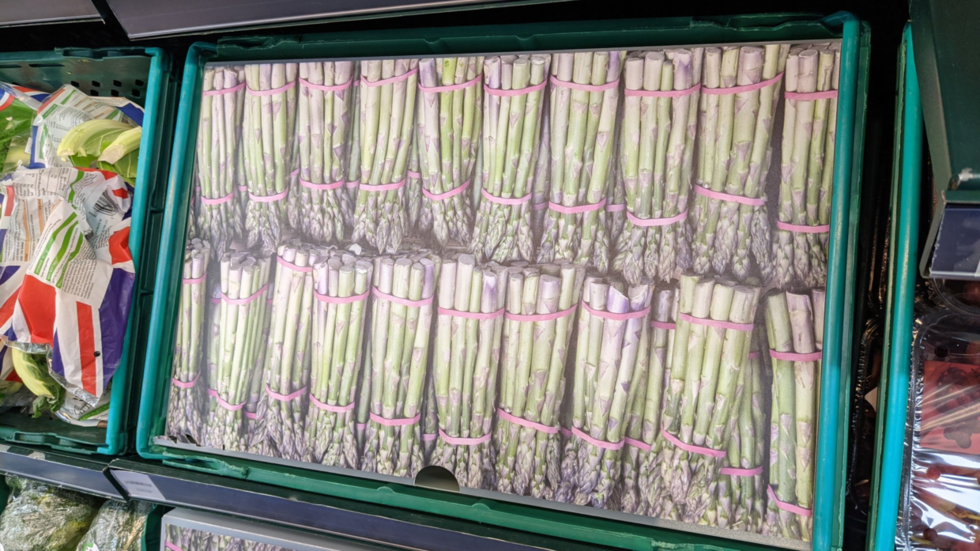 Empty shelves in British supermarkets have been a common theme in the tabloid press this year, with Brexit often noted as the cause. Recently, British papers went to town on stories that supermarkets had been using cardboard artwork to hide empty fruit and vegetable shelves. Images shared online – including artwork of asparagus in a Tesco store, and fake sandwich boxes in a Boots drugstore – served as evidence for the media outlets.

While many accept there have been teething problems following the UK’s exit from the European Union, some appear to have had enough of the media and its alleged “fearmongering.”

Responding to a Guardian story on supermarkets using cardboard cutouts, BBC presenter Evan Davis questioned why the paper had so strongly implied that this was a new phenomenon in a headline when the article itself explains that shops have been using artwork to hide gaps for years.

Others concurred it was just the media hyping a common practice that “is not new at all.” “They’ve done that for years you s**t stirring brothel pot,” another Twitter user responded.

Many social media users also claimed they had never seen any evidence of empty supermarket shelves. “That’s odd. I’ve not seen one empty shelf in any supermarket this whole time.” Although things were apparently getting “bloody expensive.”

But there are people who seem to think some cardboard asparagus would actually be useful to distinguish between “We don’t have any” and “You’re looking in the wrong place.”

Those critical of the UK leaving the EU and the impact of shortages on the British economy chimed in with speculation that the cardboard cutouts would become real if you believed in Brexit.

On Tuesday, Thierry Breton, the French politician who is also the European Commission’s internal market commissioner, claimed Brexit has been a “catastrophe” and an “economic disaster” for the UK, pointing to a shortage in fuel and food as its manifestations.

“Look at what is happening on the supermarket shelves,” the Frenchman stated, insisting there was great regret over Brexit.

Regardless of supply-chain disruption and reported shortages of goods and labour, the UK economy is expected to grow faster than all the other G7 nations this year. A recent report from professional services multinational PricewaterhouseCoopers says the UK should be the fastest-growing G7 nation until 2050.