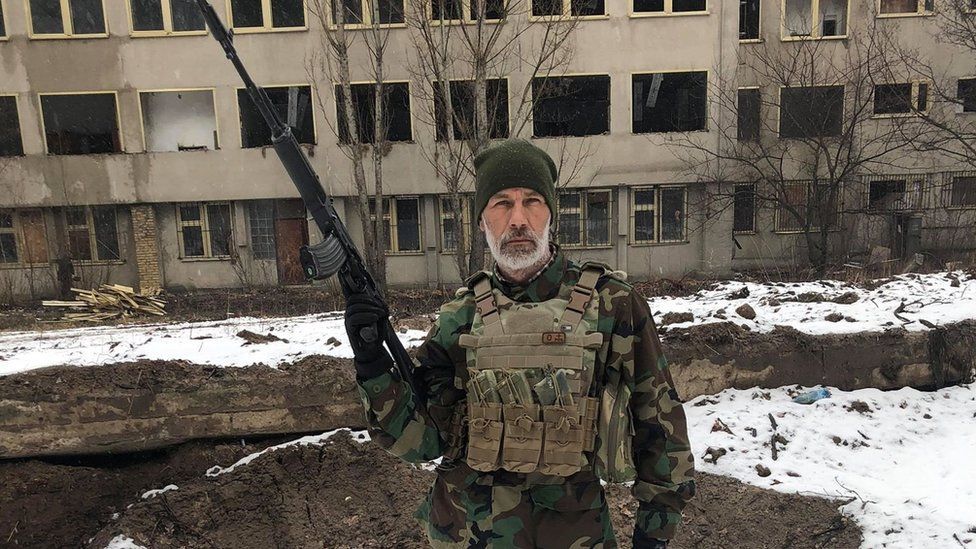 A British man has been shown in a video appealing for help from Boris Johnson, while appearing to be held captive by pro-Russian separatists in the self-proclaimed Donetsk People's Republic (DPR) in eastern Ukraine.
John Harding, who is in his fifties and originally from Sunderland, is being interviewed by a Russian TV presenter.

In the video he says he could face the death penalty.

The Foreign Office said it was concerned by his detention.

It understood Mr Harding was captured in May when Ukrainian units he was fighting with at the Azovstal steelworks were forced to surrender. The units had been defending the south-eastern city of Mariupol at the time.

The video says he was part of the Azov regiment. Mr Harding had told friends he was fighting as part of the Ukrainian National Guard.

Friends and family of Mr Harding have confirmed to the BBC it was him in the video, and his family are being supported by the Foreign Office.

He had been fighting in eastern Ukraine's Donbas region since 2018. He previously told the BBC he had travelled there to use his skills as a combat medic, to help in the fight against pro-Russian rebels.

Two other British men, Aiden Aslin and Shaun Pinner, who were also captured in Mariupol, have been sentenced to death by a Russian proxy court in the DPR.

Both they and Mr Harding had moved to Ukraine around the same time and made the country their home.

The DPR court is not internationally recognised. Foreign Secretary Liz Truss has called the death sentences a "sham judgement with absolutely no legitimacy".

The UK government has said they should be treated as prisoners of war under the laws laid out in the Geneva Conventions.

This week Paul Urey, a British aid worker, died while being held by pro-Russian separatists in east Ukraine. Officials from the DPR said he died in captivity on 10 July from underlying health conditions and "stress".

A Foreign, Commonwealth and Development Office spokesman said: "We are supporting the family of a British national and are concerned by his detention.

"We condemn the exploitation of detainees for political purposes and have raised this with Russia. We are in constant contact with the government of Ukraine on their cases and are fully supportive of Ukraine in its efforts to get them released."
#Boris Johnson  #Johnson
Add Comment