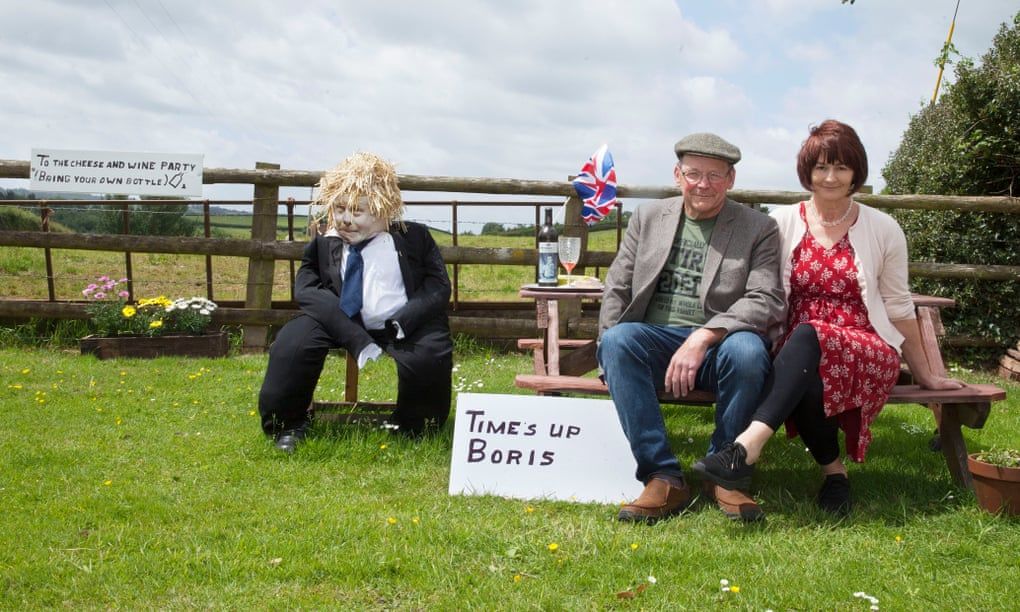 Tiverton and Honiton in Devon is usually the safest of Tory seats: but after partygate and Brexit, even it is now in play

On a grass verge down a long, winding country lane, where the hilltop views stretch across much of mid-Devon, there is evidence of rural disquiet in the peaceful village of Washfield.

A slumped figure with blond straw hair, his tie askew and suit dishevelled, sits on the roadside next to a table with wine and cheese, and a sign saying “Time’s up Boris”.

“He won the people’s choice vote in the village scarecrow competition,” says David Elston, who lives opposite and is proud to have constructed the winning entry with his wife, Marion.

“The competition was part of our platinum jubilee celebrations,” adds Elston, a retired engineer who comes from a long-established local farming family.

While he sees the funny side, as he poses next to the winning scarecrow, Elston is clear that it also carries a message. He thoroughly disapproves of the real Boris Johnson both for the damage he believes the prime minister and Brexit have done to the rural economy and for his habit of partying in Downing Street during the pandemic.

David, who says he has voted Tory in the past, and Marion will decide which party to put their crosses by in the much bigger “people’s vote” – the Tiverton and Honiton byelection on 23 June – when they attend a hustings this coming Thursday. But it doesn’t seem likely to be the Conservatives.

“His big Brexit deal is a mess, really,” says David. “A lot of price rises have been caused by the increased bureaucracy. The cost of fertilisers and feed have shot up.”

A few miles away in the small town of Bampton, near the Somerset border, John Wescott, a beef and sheep farmer who also runs a butcher’s shop in town, says Brexit has affected the export side of his business very badly – “it is all taking 10 times longer than it used to”, he says.

Farmers such as Wescott complain that since the UK left the EU, there has been too much emphasis on them receiving “public money for public good” – meaning payments for projects like digging ponds and growing trees (that is, rewilding) – and too little for actually producing food. A new government food strategy, leaked to the Guardian on Saturday, will merely compound their frustration: it has little to say on incentives for food production.

They also feel let down because the government is phasing out their subsidies while offering, in their view, little certainty about future income sources at a time when the prices of fuel, fertiliser and animal feed are all going through the roof.

Wescott voted Conservative “years ago” but definitely will not be doing so at the byelection. “It would be like turkeys voting for Christmas,” he says.

Colin Rowland, a sheep farmer from Bampton who is a former chairman of the National Farmers’ Union in Devon, voted for Brexit and says he does not regret doing so. It could be made to work, he says. But current government policy is, in his view, “absolutely crazy”.

“I feel that, since Brexit, they have not delivered what they promised. All they want to do is rewild the countryside. They should be encouraging us to increase food production so we become more self-sufficient.”

Such opinions from the heart of a normally rock-solid rural Conservative constituency (the Tories had a majority of 24,239 in the seat at the 2019 general election) do not bode well for Boris Johnson as he fights to remain in Downing Street. 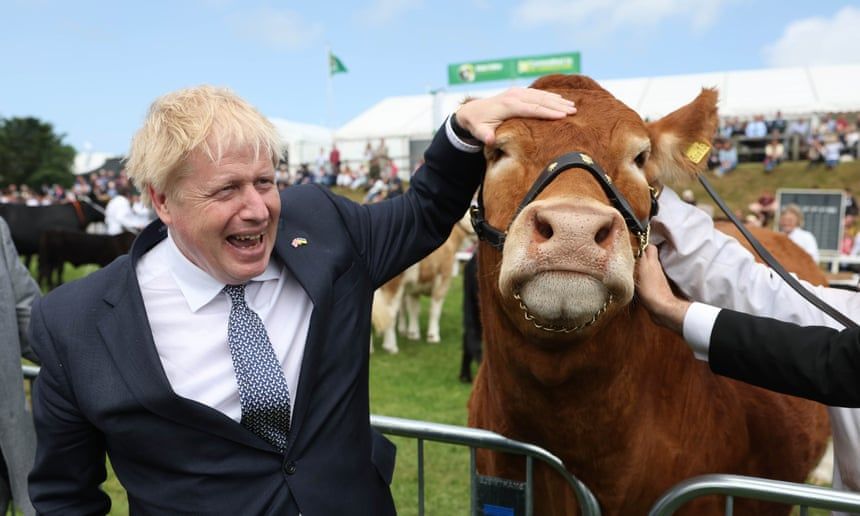 Boris Johnson at the Royal Cornwall Show in Wadebridge on Friday.

Last Monday he survived a bruising confidence vote by his own MPs. But 148 Tories – a larger number than expected – came out against him, leaving the prime minister badly wounded, and thrashing around for policy ideas with which to attempt some sort of revival.

Predictably, he vowed to press on despite the revolt. But there are plenty of senior Tories who now doubt his capacity to bounce back.

All eyes are now turning to this previously ultra-safe Tory seat in the West Country. The byelection could hardly have been triggered in more embarrassing circumstances for the prime minister’s party: the former incumbent Tory MP Neil Parish, himself a farmer, resigned after admitting to having watched pornography twice on his mobile phone in the House of Commons.

Parish was popular in the area and his fall was traumatic enough for the party locally and nationally. But if the Conservatives were to lose Tiverton and Honiton to the Liberal Democrats in 11 days’ time, as well as Wakefield to Labour on the same day, as seems possible, the consensus in Westminster is that it may be curtains for the prime minister.

With this in mind, Johnson visited Tiverton and Honiton on Thursday. But he met only a few local Tories in a prearranged event that left nothing to chance. Having been booed during the platinum jubilee celebrations when he and his wife, Carrie, arrived for a service at St Paul’s Cathedral, Johnson’s team are desperate to avoid further such public relations disasters.

Thursday’s appearance marked an extraordinary turnaround in the fortunes of a politician who once revelled in the handshakes and walkabouts. Ed Davey, the Lib Dem leader, wasted no time in accusing Johnson of avoiding voters and “treating Devon and the country with utter contempt”.
It is not going all the Lib Dems’ way in the

south-west, however. Johnson still has plenty of supporters, among an electorate that seems deeply split.

In the constituency on Thursday afternoon, views were very mixed. Several people out shopping said they thought Johnson had done a good job in very difficult circumstances, and had got the country through Brexit and the pandemic. Retired couple Tricia and Tim Bentley said they remained admirers of the prime minister despite everything and would be voting Tory as usual. Their faith was unshaken. When asked about Partygate, Tricia said: “Yes, OK, it was wrong”, but added: “It has all been bit of a witch-hunt.”

Retired police officer Jenny Sykes held a similar view: “What he has had to put up with is unprecedented,” she said. “He kept me safe in the pandemic. I will be voting for him because I think he has done pretty well.”

But some were turning from the Tories to the Lib Dems – such as Chris Ward, a former printer, who said it seemed that Johnson had turned No 10 into a permanent party venue. “They have just been in power too long,” he said. “It is time to put them out to grass.”

Richard Prescott, a retired hotel manager from Tiverton, said he had switched to the Tories in 2019 from Labour but was so disappointed with Johnson that he would now switch again, this time to the Lib Dems to get rid of him. “He has let us all down. I don’t believe his apologies. I don’t believe a thing he says.”

The Lib Dems, who are fielding a former army major, Richard Foord, as their candidate, know that while the national and local moods may be moving in their favour, overcoming such a vast Tory majority (having come third behind Labour in 2019) will be a huge task.

Key to their success and Johnson’s chances of staying on as PM could be the number of Labour supporters who vote tactically for the Lib Dems. One of the party’s army of experienced Lib Dem canvassers, who has worked on other campaigns including the recent triumph in North Shropshire, said he was not at all sure of victory this time. “Anyone who is counting their chickens here would be very foolish,” he said. “Certainly no one in the party is doing so.”

But there is no doubt the Tories are worried. Over recent days people claiming to have been working for the Conservative candidate – the largely invisible Helen Hurford, a beauty salon owner – have been circulating yellow leaflets entitled “Thinking of Voting Liberal Democrat?” which claim that the “Lib Dems want to rejoin the EU” and are “plotting to put Labour into power” by forming electoral pacts with them – neither of which is strictly true.

For Johnson, the fact that he lives to fight another day is an achievement in itself after the events of Monday evening in Westminster.

That said, his attempt to plough on with an attempted reboot of policies has left both Tory supporters and rebels bewildered and uncertain about what comes next.

“This is the longest week in politics I can remember – and that includes all those Brexit ‘meaningful votes’,” said one former cabinet minister, who still backs the prime minister but is realistic about his prospects. “He’s effectively in a probationary period at the moment. He understands that.”

The personal view of this former minister is that the real danger point may not be the June byelections but the next staging post in the continuing saga of Partygate.

“It will be the publication of the report by the committee on privileges [examining whether he misled MPs over lockdown parties]. If it finds that he’s knowingly misled the House, then quite clearly he will have to go.” 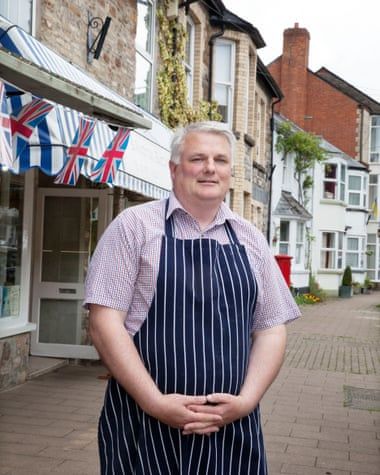 John Wescott, a livestock farmer and butcher in Bampton, says the after-effects of Brexit mean voting Tory now would be like ‘turkeys voting for Christmas.’

Johnson’s path out of the woods is certainly far from clear and everyone at Westminster knows he is still in deep trouble. On Wednesday, when at his most vulnerable, he was, however, helped by Labour leader Keir Starmer’s flat performance at prime minister’s questions.

Johnson left the chamber with a clenched fist held aloft, so lacklustre was the attack from the other side of the dispatch box. Labour MPs were left despairing at what they saw as an oddly low-key performance in which Starmer was unable to land blows on a prime minister seemingly at his mercy, and on his way out of office.

But neither have Johnson’s performances convinced Tory MPs that he can recover sufficiently to take the party through to the next general election. After demanding ideas from his cabinet to help his “fightback”, what emerged midweek was an old policy dating back to David Cameron’s time in office – a plan to allow people to use benefits to help secure a mortgage and for housing association tenants to buy their homes.

Another major moment for Johnson comes on Monday with the publication of a new bill effectively altering Northern Ireland’s Brexit deal. Johnson had initially signalled to Brexiters, many of whom backed him last Monday, that he would take a hard line with Brussels. But after meetings with the chancellor, Rishi Sunak, and the levelling-up secretary, Michael Gove, the bill is said to have been softened. It now leaves Johnson vulnerable to new screams of betrayal from Brexiter Tories.

Pressure is also growing by the day on Johnson, from many of his own MPs, to announce tax cuts. A speech on that subject from the prime minister and chancellor has been delayed, amid suggestions of splits and confusion over what can and should be done to fire up economic growth and help people further with the cost of living crisis.

Down in Devon, in Tiverton and Honiton, voters know they may well hold Boris Johnson’s ultimate fate in their hands. There is a sense in the constituency that it could go down to the wire. The excitement is building and the canvassing is becoming ever more frantic.

Richard Hooker, who has a 12-acre smallholding near Honiton on which the Lib Dems’ “Winning Here” signs are planted everywhere, is hopeful, but no more.