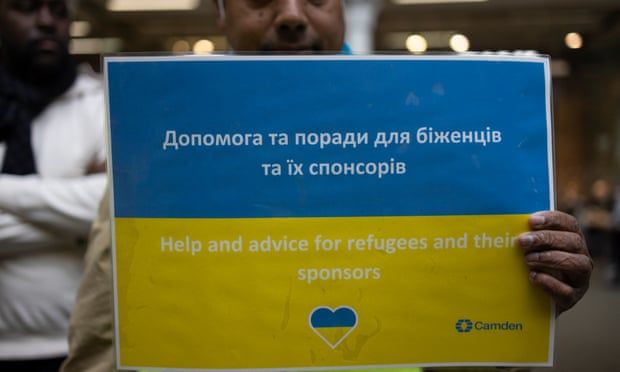 Calls for more funding for English classes for Ukrainian refugees

Language schools and community groups have called on the government to increase funding for free English classes for Ukrainian refugees, saying they are being inundated with applications.

Providers have reported waiting lists of thousands and Ukrainians around the UK joining their online classes because they do not have anything nearby.

Demand has especially gone up in recent weeks, they said, as thousands of newly arrived refugees, many of whom are suffering trauma and have had their former homes destroyed, attempt to set up a new life in the UK.

Access is a particular problem among Ukrainian refugees because as predominantly women and children, a lack of childcare at most classes prevents many of them from attending.

The Ukrainian Institute in London said its waiting list for online and in person classes has more than 5,000 people on it. In Paddington the charity teaches 220 students and they soon have 35 more students starting at another site in west London, where they are also planning to provide childcare.

Maria Montague, the Ukrainian Institute’s deputy director, said: “There is definitely a huge, huge demand that is not being met. The more English schools that are supported, the better.”

The timing of most volunteer-led classes, in evenings and weekends, makes it especially difficult for mothers, she said. “If they can’t bring their kids with them, in general then a lot of the time that means they can’t access it.”

She said classes were available at adult education colleges, but that many did not have places until September, which is too long for many refugees to wait, who need it now.

“English is just absolutely key to every stage of trying to get settled in the UK. It’s absolutely at the core. Students tell us how much they need the English just to be able to go about with their lives,” she said.

WEA, the largest charitable provider of adult education in England and Scotland, said they had seen a significant rise in demand for English classes, which they expected to “grow more and more”. But they have had to use existing government funding to support Ukrainian refugees because they have not received any new funding to pay for it.

Simon Parkinson, the WEA’s chef executive, called for a more “joined up” governmental approach so they can ensure the appropriate resources are in place before an influx of people arrive in a particular part of the country, adding that funding for community-based adult education has been falling for the last 10 years in real terms.

The lack of availability and funding has left voluntary organisations “bridging the gap” with untrained teachers, according to community organisers.

In south London, the White Eagle Appeal has set up weekly English classes at the request of the Ukrainian community.

On Wednesday night, dozens of adults and their children filled the White Eagle Club, a Polish community centre in Balham, for refreshments before dividing up into three groups depending on their English level.

In the beginners class, mainly female students ranging from their 30s to 60s sat around two large tables learning how to introduce themselves in English. The experience is also new for their volunteer teacher who usually works in marketing in the city.

Among the advanced pupils is Anastasia Shilakhtina, 33, a lawyer who moved from Mariupol to Streatham in April with her son Max, nine, who said she needed to improve her English to find good work opportunities. “My city is under Russian control right now, my house is destroyed and I have no choice,” she said.

Liza Aleksyeyeva, an international environmental lawyer from Lviv, started going to the sessions with her six-year-old daughters Yeva and Polina to practise her English. While she speaks fairly fluently, she is not yet confident discussing policy issues for her job.

“Here we said it would be good to have a discussion club to practise speaking English and I’m still looking for other experiences to get to the place where I can talk about policy issues and more important stuff than traffic and cooking and stuff like that.”

In Sheffield, Hayley Nelson, director of Learn for Life Enterprise, which runs a total of 30 in-person and online English classes a week and is teaching around 75 Ukrainians, said they are also seeing huge demand.

“We’re getting people signing up for classes from London, in Wales, in other parts of South Yorkshire,” she said. “They can’t find classes in their area so they’re coming to our classes. And we’ve got women and young children who are attending online because they can’t get childcare.”

They want to put on more classes but first they need to recruit more volunteer teachers.

“There is a need for class provision and funding provision because we’re not getting funding for this,” she said. “We’re just doing that because we think they should be able to learn English when they’ve arrived.”

Urging the government to “catch up with the situation”, she said there should be flexible funding that community organisations can apply for from the government to teach English to new arrivals, adding that any council help would only take them through to the end of July.

The Local Government Association said English classes were not generally provided by councils, saying it was an issue for the government.

According to government guidance, £10,500 per person funding to councils can be used to fund education and skills support.

A government spokesperson said: “The government acted quickly so that all Ukrainian adults and their families could immediately access the same education and childcare as a UK citizen.

“This has included access to education and training funded through the Adult Education Budget, including English for Speakers of other Languages (ESOL) courses. All eligible Ukrainian refugee families can also access our free early education entitlements.”