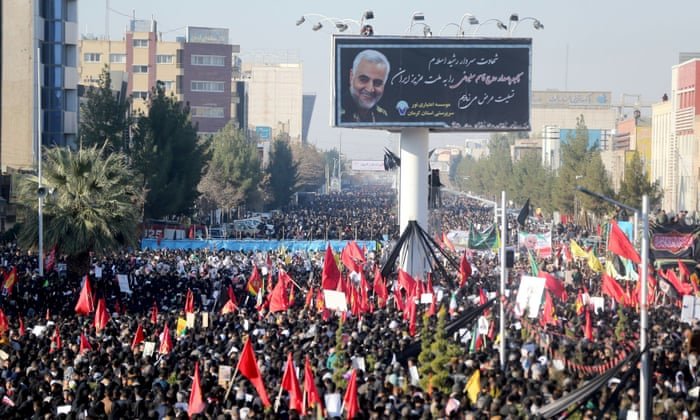 Dina Esfandiary
The national hero’s assassination has brought together Iran’s divided government and its exhausted and desperate public, says Dina Esfandiary, a fellow at the Century Foundation
For Iranians, the assassination of Qassem Suleimani, the head of Iran’s notorious Quds force, was a profound upset. Suleimani was one of the most influential and powerful men in the Islamic Republic of Iran. He had more sway than the president, spoke to all the various factions, and had a direct line to the supreme leader. Most importantly, he was popular with the general public. One poll, taken as the fight against Islamic State raged, found that 73% of Iranians had a favourable opinion of him. Even so, the large crowds that have turned out on the streets of cities across the country have exceeded predictions. In a sense, though, the formidable show of unity is no surprise. Iran – like any other country – is proud, patriotic, and its people tend to put their differences aisde when faced with an outside enemy.

Suleimani oversaw Iran’s regional policy, and as a result is regarded as having spent his lifetime defending his country. When Isis approached the Iranian border after taking over swaths of territory in neighbouring Iraq in 2014, the Quds force were at the forefront, representing the only country willing to commit boots on the ground in the fight to destroy the group. While many in the region viewed Suleimani as a deeply controversial figure, to put it mildly, a significant number of Iranians, Kurds and Iraqis saw him as having been pivotal in stopping Islamic State.

At home, this popularity cut across political lines. Becoming a battle hero is one way to win broad legitimacy, and so it has proved in death as in life. The killing of one of their country’s most senior officials is perceived by Iranians as a violation of sovereignty, and the rally-around-the-flag effect has been notable.

That doesn’t mean all Iranians condoned Suleimani’s actions abroad. In fact, for years people have been complaining about the extent to which the government has seemed to be occupied elsewhere, even as the internal situation deteriorated. In 2018, chants of “no to Gaza, no to Lebanon, I give my life for Iran” and “Leave Syria and think of us” echoed (not for the first time) at protests around the country. When economic times have been hard due to sanctions, both prior to the 2015 nuclear deal and today, Iranians find it difficult to understand why their rulers pour money into the region rather than using it in Iran.

Ordinary people continue to be squeezed by Donald Trump’s “maximum pressure” campaign, with no prospects for improvement. This, along with general discontent, led to significant protests in November 2019. These caught the government off guard, but didn’t prevent it swiftly crushing the demonstrations and enacting a nationwide ban on the internet that lasted five days. That response, unsurprisingly, further entrenched the discontent. Trump’s killing of Suleimani, however, has put those concerns on the back burner. Instead, Iranians have adopted a “better the devil you know” approach: unifying across the spectrum, even to the point of standing behind their government, in order to resist increasing US aggression.

And this means that, while Suleimani’s loss is a significant blow for Iran, the strike by the US was in one sense a gift to the Iranian government. It could never have dreamed of achieving such unity in difficult times otherwise.

The assassination has also had the effect of bringing together a divided elite, at least for the time being. Leading figures from the conservative and reformist camps spoke in unison, from the supreme leader, who vowed “revenge”, to the former presidential candidate and leader of the Green movement, Mehdi Karroubi, still under house arrest, who reportedly expressed his condolences. Even the former foreign minister of Iran under the shah, Ardeshir Zahedi, described Suleimani as a “patriotic and honorable soldier who was a son of Iran”.

The US withdrawal from the nuclear deal already meant that moderates had been forced to harden their positions. The Rouhani administration, for example, could no longer actively support dialogue with the US, instead cautiously calling for discussions on the condition that all sanctions were lifted beforehand. Today, even that position has become difficult. Who in the political establishment can expend political capital suggesting rapprochement with the US after what it has done and, importantly, after the level of public mourning? The answer is easy: no one.

With the killing of Suleimani, Trump has accomplished what no one in the Iranian elite thought possible: he has united a fractured, exhausted and desperate Iranian public in a show of unity.

And while these scenes are very far from an equivocal statement of support for the Islamic Republic, they are a resounding message to the world: Iranians will stand with their government in the face of external threats.
Add Comment