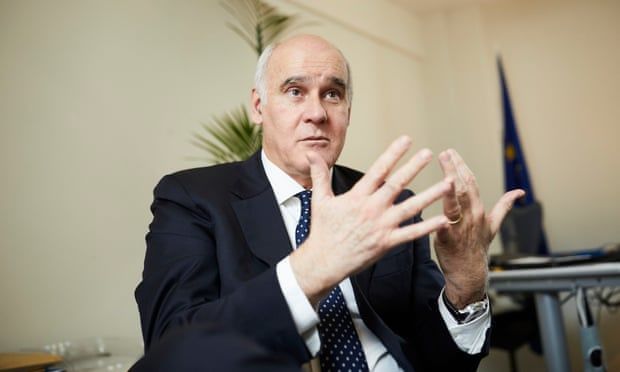 In a joint statement, the UK foreign Secretary, Dominic Raab, and EU’s high representative for foreign affairs, Josep Borrell, a former Spanish minister, said agreement had been struck in the margins of a G7 summit.

“We are pleased to have reached an agreement together, based on goodwill and pragmatism, on an establishment agreement for the EU delegation to the UK,” they said. “The EU ambassador will have a status consistent with heads of missions of states.”

The compromise struck will mean, however, that some of the 25 staff working under the ambassador will not have immunity from criminal charges.

The two men said: “EU Delegation staff will have the privileges and immunities needed to function effectively, while allowing for effective administration of justice, and we look forward to moving ahead and tackling global challenges together.”

Raab is understood to have been exercised about the need to limit the number of people with immunity in light of the death of Harry Dunn in August 2019 who was killed by Anne Sacoolas, a US diplomat who was allowed to leave the country due to her diplomatic exemption from prosecution.

The UK had declined to give João Vale de Almeida, who arrived last year in London to represent the EU, full diplomatic status on the basis that he does not represent a country. He was instead given diplomatic recognition, which is one rung below.

The British government’s approach has stirred anger in Brussels as the EU has 143 delegations around the world, each of which has full diplomatic status.

In January, Borrell had expressed the displeasure of the 27 member states at the snub. “It’s not a friendly signal,” he said, “the first one that the United Kingdom has sent to us immediately after leaving the European Union. If things continue like this there are no good prospects.”

As a result of the dispute, the UK’s head of mission to the EU, Lindsay Croisdale-Appleby, had not been accorded the usual diplomatic access he could have expected from his position, a cause of some difficulty in recent weeks as a range of EU-UK crises have hit. Sources on both sides had been largely embarrassed by the saga. EU sources said they would now swiftly arrange for Croisdale-Appleby to present his credentials to European council president Charles Michel in order to normalise diplomatic relations.
Add Comment