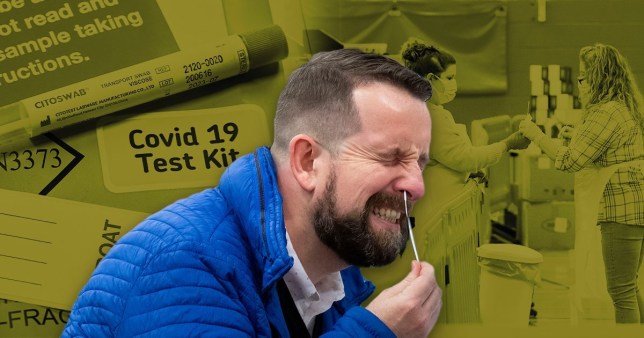 Those who qualify for the so-called ‘freedom pass’ won’t have to stay at home after coming into close contact with someone infected with Covid-19 provided they keep testing negative.

The government’s ‘Winter Plan’ for measures replacing the national lockdown on December 2, published today, said the alternative will be offered in ‘institutional settings’ such as hospitals and schools by the end of the year and rolled out nationwide in early 2021.

There are currently no plans for the exemption to cover other Covid restrictions such as the ‘rule of six’ and mask-wearing requirements, as had previously been reported.

It has not yet been announced how many negative tests will be needed to qualify or how often counts as ‘frequent’.

The plans form part of a drive to ‘broaden’ testing to catch symptomless spreaders of the virus which is being spearheaded in Liverpool.

The city-wide testing regime currently underway is a pilot for the ‘Operation Moonshot’ scheme to provide weekly testing for the whole of England and local officials say it has identified ‘large numbers’ of carriers with no symptoms.

In the rest of the UK, free NHS testing is only available to people experiencing Covid symptoms.

The ‘freedom pass’ is also to be trialled in Liverpool first, although an exact date has not yet been set.

It may be offered earlier to areas placed under Tier 3 restrictions in the new post-lockdown regime.

The ‘Winter Plan’ states that local authorities under the strictest rules will be offered a six-week ‘testing surge’ in which the general population will be able to get free tests.

There is also the possibility that more exemptions could be rolled into the ‘freedom pass’ in future, with former health secretary Jeremy Hunt backing proposals to allow holders to avoid any lockdown regulations.

Government insiders quoted in media reports have also suggested that anyone who has been vaccinated against Covid-19 could be given documents granting them access to sports matches and other cultural events.