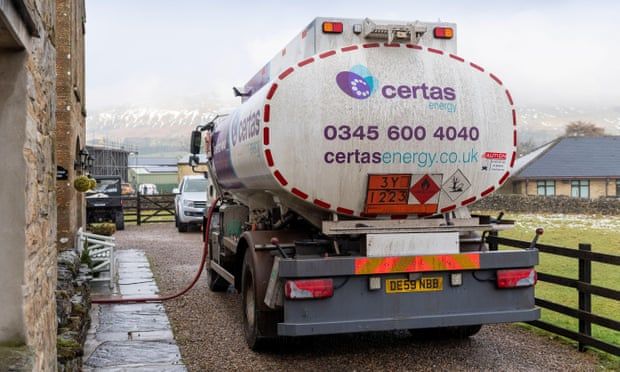 If you had a nasty shock when you last filled up your car or received your latest gas bill, spare a thought for the 1.5 million rural households who rely on oil deliveries to heat their home. Many of them have seen prices more than triple over the past six months – and that’s assuming they can find a company willing to deliver.

Last September, consumers were paying about £250 for a 500-litre delivery of domestic heating oil. Fast forward to this week and the price had leapt to between £600 and as much as £875 for those requiring an urgent delivery.

The UK’s biggest domestic oil distributor, Certas, is among those that have been forced to suspend their normal pricing practices as the war in Ukraine sent prices rocketing. The market has in part broken down as suppliers have been cancelling broker-ordered deliveries, fearing they may be selling at a loss.

Normally, heating oil buyers agree a price and the delivery date when ordering. But the extreme price fluctuations in recent days have left suppliers taking orders and then contacting customers on the day of delivery with the price – and asking them whether they still want to go ahead.

Unlike those living in houses connected to the gas grid, people using oil to heat their homes are not covered by Ofgem’s price cap – leaving them at the mercy of rising oil prices. They tend to be living in rural locations, often in older, poorly insulated properties.

There have been calls for the price cap on energy to be extended to the domestic heating oil market. 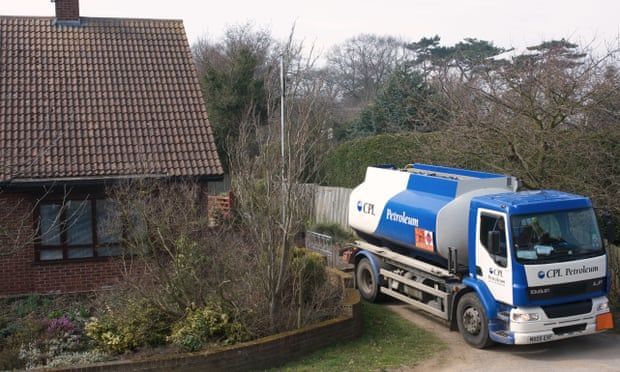 Charities have called for the price cap on gas supplies to be extended to the domestic heating oil market.

Even before Russia’s invasion of Ukraine, prices had increased alarmingly.

About 65% of the quoted price of heating oil – which is very similar to diesel sold on forecourts – is based on the crude oil price seven to 10 days previously. On 18 March, oil prices hit almost $130 (£99) a barrel but have since dropped to about $100 at the time of writing. In early December, suppliers were paying $69 for a barrel of crude.

So hefty have the price rises for oil deliveries been during the last two weeks that typically only those who have run out – or are about to run out – have been ordering. Some experts are advising those who are not yet in that position to hold out in the hope that the market stabilises. 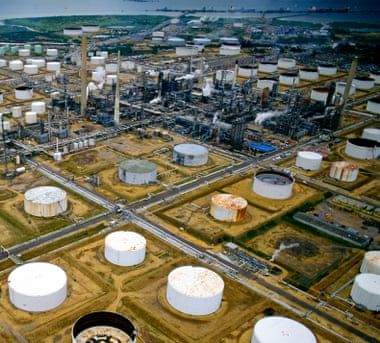 An oil refinery. About 65% of the quoted price of heating oil is based on the crude oil price seven to 10 days previously.

Imogen Pursch is one of thousands of people caught up in the turmoil. She and her sister moved to rural Herefordshire last November, and the house they bought is off the gas grid, meaning they have to rely on oil.

“We bought 500 litres of oil in November and it cost £340 back then. That’s about a quarter of a tank, and we expected it to last until April,” she says.

However, when their parents announced they would visit, they realised they would need another delivery to make sure the house would be warm enough.

“We were looking at the BoilerJuice oil broker website and, for a week or so, no one was delivering to our house. Then finally on 2 March they were, and we agreed to pay £540 for 500 litres for delivery, eight days later.”

But on that day Imogen got a text alerting her to an email cancelling her order. The company blamed “world events” and said the supplier was unable to go ahead.

BoilerJuice told her it would arrange a refund but Imogen has little choice but to try it again. Her latest quote was £850.

Rob Sutherland, who lives in Drumnadrochit, not far from Inverness, contacted Guardian Money this week to warn that the price of heating oil was set to leave vast areas of the country living in poverty.

“We keep hearing about gas prices and increases to the pricing caps, yet we living in rural areas are not protected due to not being on the gas grid. The reality of oil-fired boilers is £1.35-a-litre prices and a cost of nearly £2,000 to fill a fairly modest tank, which may last three or four months. Add on our utterly terrifying road fuel costs, and there is going to be an almighty impact which affects the most remote areas profoundly,” he says.

Ken Cronin, who runs the UK and Ireland Fuel Distributors Association, says suppliers have been doing their best in very difficult circumstances.

“UKIFDA members collect heating oil from refineries almost daily, and in the first 10 days, prices were increasing on average by 5p per litre per day. Currently, prices are lower but remain volatile. As an industry, we recognise the significant impact this has on customers, and our members are working hard to provide the best service and price under the circumstances.”

BoilerJuice’s Tim Buckman told Guardian Money that oil suppliers and customers were facing disruption because of the significant fluctuations in oil prices, with “delays, a lack of availability and, in rare instances, cancellation and price changes”.

He says: “We are doing all we can liaising with suppliers and customers to support them during this very challenging time.”