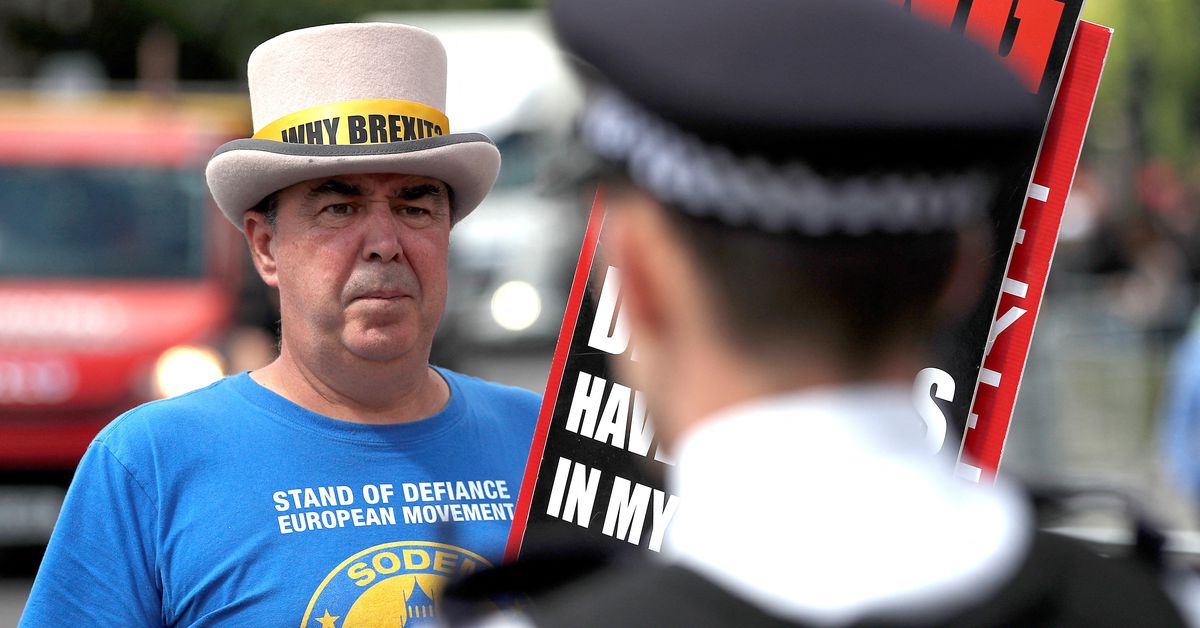 British police using new powers took away audio speakers from demonstrator Steve Bray, who is known for shouting "Stop Brexit" at lawmakers outside parliament and sometimes disrupting live news reports with his pro-European Union banners.
Bray has been a regular presence at Westminster for the last five years, playing protest songs and confronting lawmakers from Prime Minister Boris Johnson's Conservative party, which led Britain out of the European Union.

As he attempted to set up on Tuesday, Bray said he was surrounded by about 20 police officers who took away his speakers using powers under a law which had come into force at midnight.

Bray said police cited the new Police, Crime, Sentencing and Courts Act to say he could not conduct a "noisy protest" within a designated area outside parliament.

"We did everything we could to hang on to them, but more and more police came and there is only so long you can hold on to something," Bray told Reuters.

The police said Bray's audio speakers were seized after he was repeatedly warned to stop using the equipment in an area where it is banned. The police said he had been reported for the offence, which means he will be considered for prosecution.

Bray said that when police asked, he gave his name and address as "Mickey Mouse, 10 Downing Street" - a reference to the British prime minister's official residence.

He first became known several years ago for creeping into view behind television correspondents' live shots in front of parliament, brandishing signs protesting Britain's decision to pull out of the EU. As fast as producers could cut away, Bray would scamper around to a new angle, and get back in the frame.

Bray said the police's attempt to silence him was a worrying precedent.

"We should all be defending everyone's rights to protest," he said. "We are not changing anything, more people need to realise what is going on, it is not about our protests, it is about all protests."
#Boris Johnson  #Johnson
Add Comment