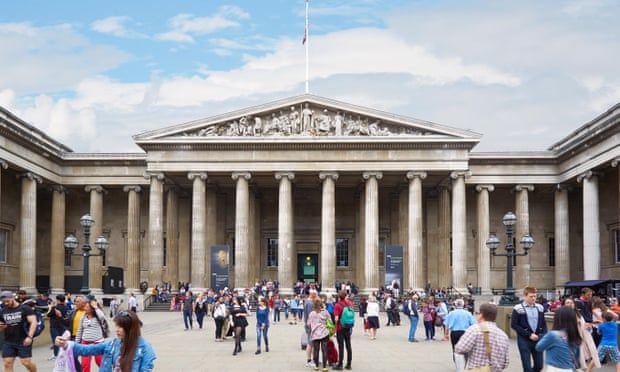 Museum is latest institution to distance itself from family accused of profiting from US opioids crisis
The British Museum has become the latest cultural organisation to remove the Sackler family name from galleries and rooms they have supported.

For decades the Sackler name had been associated with generous philanthropic donations to galleries and museums in the UK, Europe and the US. However, in recent years it has become toxic, with the family accused of making a profit from the US opioids crisis.

The Mortimer and Raymond branches of the Sackler family owned Purdue Pharma, the maker of the opioid painkiller OxyContin, which played a central role in what has been described as “the worst drug crisis in American history”.

Osborne said the museum had reached an agreement with the Raymond & Beverly Sackler Foundation to remove the Sackler name from all the galleries, rooms and endowments they had supported.

That includes the Raymond & Beverly Sackler Galleries of the Ancient Levant, which opened in 1998 and contain treasures from a region which corresponds with modern-day Lebanon, Israel, Palestine, Jordan and western Syria.

It also had “Sackler rooms” available for commercial hire.

The campaign to disavow Sackler money has been spearheaded by the American art photographer and activist Nan Goldin, founder of the campaign group Pain (Prescription Addiction Intervention Now).

It has had a number of notable successes. Tate announced in 2019 that it would no longer take donations from the Sackler family. Last month it was reported that a plaque marking “the Sackler escalator” had been removed and a sign by the “Sackler lifts” had been taken down.

The Serpentine Sackler Gallery in Kensington Gardens, London, which opened in 2013, was rebranded as the Serpentine North Gallery last year.

The Metropolitan Museum in New York and the Louvre in Paris are among a number of galleries that have moved to distance themselves from the Sackler name.

In a statement the Raymond and Beverly Sackler Foundation said it had long admired the work of the British Museum.

It read: “As the museum develops a new masterplan to transform for the future, we feel this decision comes at a unique moment in the museum’s evolution.”

Osborne said: “The British Museum is grateful for the foundation’s past support, and the trustees appreciate their cooperation in coming to this agreement as we now move the museum into a new era and present our incredible collections in different ways for new audiences.”

The museum said it had received Sackler money from the late 1990s to 2013. There were no plans, it added, to remove other names or review relations with other donors.
Add Comment