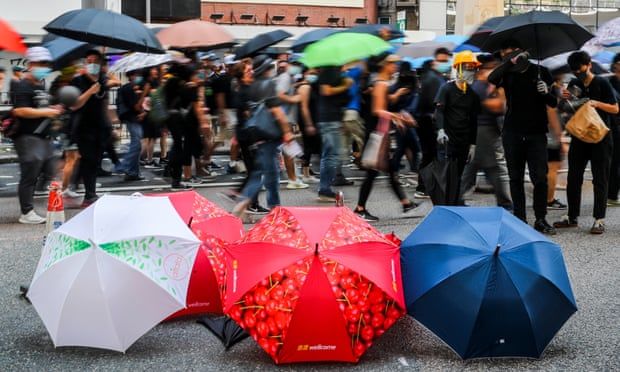 Figures show that 93% of those charged over protests are under 25 and many therefore not eligible to access current UK visa scheme
More than nine in 10 people who have faced protest charges in Hong Kong are too young to access a UK visa scheme dedicated to helping Hongkongers flee to Britain, according to advocates and MPs calling for new laws to assist them.

The release of the figures on Sunday by the advocacy group Hong Kong Watch comes before a parliamentary debate this week on proposed migration law amendments that would widen the pathway for people with British national (overseas) (BNO) status to resettle in the UK.

More than 10,000 people were arrested during or after the mass protests that swept Hong Kong in 2019. The data found that 93% of more than 1,000 who had been tried by July this year were under the age of 25.

Another 49 people arrested under the national security law were also under the age of 25. Last week the 20-year-old student activist Tony Chung was jailed for 43 months on charges relating to pro-independence social media posts.

In the wake of the crackdown on protesters and pro-democracy figures that sent people fleeing overseas, the UK launched its BNO visa scheme, allowing holders of BNO status and their immediate families – estimated at the time to be about 5 million people – to apply for dedicated entry visas with a pathway to full citizenship.

Tens of thousands applied in the first few months, but there has been long-running concern that people born after 1997, when Hong Kong was handed back to China, are not eligible to move to the UK under the scheme unless accompanied by a parent with BNO status.

Hong Kong Watch said the scheme in its current form has “left behind” young people, and called for the adoption of a borders bill amendment that was proposed by Damian Green and has the support of at least 12 Conservative MPs including the chair of the foreign affairs select committee, Tom Tugendhat, and the former Tory party leader Iain Duncan Smith.

The amendment would see the home secretary expand the BNO visa scheme to Hongkongers who have a BNO status-holding parent and are aged between 18 and 25.

“The BNO scheme is a great success story which the government should take credit for, but sadly the current scheme does not cover many of the brave young activists in Hong Kong,” said Duncan Smith.

“Many of these pro-democracy campaigners are in danger of being prosecuted by the intolerant Chinese Communist party and its representatives in Hong Kong. I urge the government to think carefully about helping these people too.”

“My amendment would mandate a simple rule change that would ensure our immigration system offers a lifeline to the young people who need it most,” he said. “If we do not rationalise the policy in this way, many of these people will inevitably end up claiming asylum because they face political prosecution.”

Hong Kong Watch said a recent survey of 24 Hong Kong asylum seekers who were waiting to have their applications processed in the UK found that half had at least one BNO status-holding parent.
Add Comment