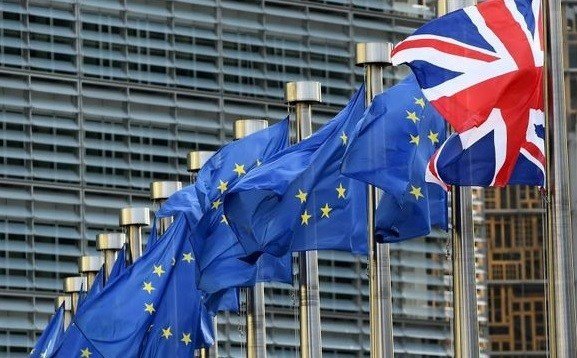 The British government's chief Brexit negotiator David Frost said Sunday that his government is unafraid to walk away from the post-Brexit trade talks with the European Union (EU) if the regional bloc does not compromise on major issues, including fisheries and state aid rules.
"This time, we won't blink," Frost told the Mail newspaper on Sunday.

"We came in after a government and negotiating team that had blinked and had its bluff called at critical moments and the EU had learned not to take our words seriously...So a lot of what we are trying to do this year is to get them to realize that we mean what we say and they should take our position seriously," he said.

"We are not going to accept level playing field provisions that lock us in to the way the EU do things," he said.

Britain ended its EU membership on Jan. 31 but is still following EU rules during the transition period until Dec. 31 to enable a permanent future trade deal to be reached. During this period, Britain would have to pay into EU funds but have no say in laws imposed by Brussels.

"We want to get back the powers to control our borders and that is the most important thing," he said.

Frost made the remarks as the trade talks are to resume on Tuesday in London with both sides still having differences on issues such as fishing and the level of taxpayer support Britain will be able to provide for businesses, also referred to as state aid rules.

British Foreign Secretary Dominic Raab said the week ahead was "a wake-up call for the EU", adding that "the EU's best moment to strike a deal is now."

Both sides want a deal agreed next month in order to have it signed off by politicians on both sides of the Channel by the end of the transition period on Dec. 31.

The upcoming talks in London, which will be the eighth round of Brexit talks, are expected to mark the final phase of the negotiations, with Frost's team calling for "more realism" from the EU side to break the deadlock.

"The EU must also realize that we are serious about leaving with an Australian-style trading relationship and reclaiming our independence as a sovereign nation if we cannot find acceptable terms," he said.

The EU's chief negotiator Michel Barnier said Wednesday in Dublin that he was "worried and disappointed" after Frost made no concessions to end the impasse during their informal talks in London a day earlier.

There will be no post-Brexit trade deal without UK-EU agreement on fisheries, Barnier said. He warned Britain against using the issue as a "bargaining chip" in stalled talks.

"We did not see any change in the position of the UK," Barnier said. "This is why I express publicly that I am worried and I am disappointed because, frankly speaking, we have moved."

If Britain and the EU fail to secure a trade deal before the transitional period expires, both sides will trade under the World Trade Organization terms, under which new border controls and tariffs will mean extra cost for their trade. Enditem
Add Comment