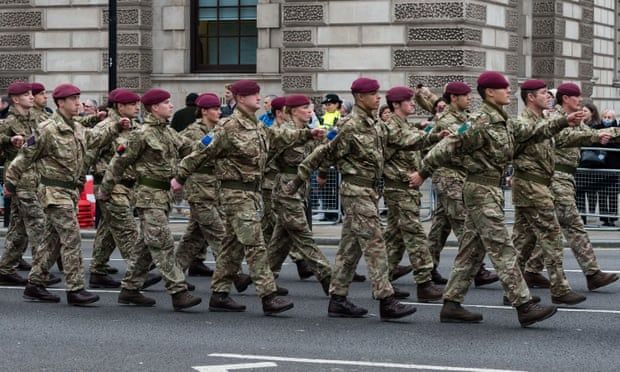 Defence secretary says Future Soldier programme will reconfigure army to face next-generation threats
The defence secretary, Ben Wallace, has announced a radical reorganisation of the British army, with an additional £8.6bn to be spent on equipment and a new ranger regiment created to help counter extremist organisations and hostile state threats.

The Future Soldier programme would reconfigure the army to address next-generation threats around the globe, positioning it as a globally engaged, modernised war-fighting force, Wallace told MPs.

“To keep pace with the changing character of warfare our army must be forward-looking, adaptable and embracing of new ways of working as much as new weapons and technologies,” he said.

Wallace said the extra £8.6bn in equipment more than 10 years, bringing the total investment to £41.3bn, would create “a modern, innovative and digitised army”. The army would operate on a “continuous basis” and be “persistently engaged around the globe”. It would be “as agile in the new domains of cyberspace as it is on the ground”, with state-of-the-art equipment including upgraded tanks, he said.

The programme would transform the army into a more agile, integrated, lethal and expeditionary force, with integration at its heart, bringing together regular, reservists and civil servants, Wallace said.

From December a new ranger regiment will form part of the newly established army special operations brigade, and it will be routinely deployed around the world to counter extremist organisations and hostile state threats. By mid-2022 a new “deep recce strike brigade” combat team will be established.

New equipment such as Boxer armoured vehicles, Challenger 3 tanks, AH-64E Apache helicopters, long-range precision missiles and uncrewed aerial systems will be introduced, while much of the fighting force will fall under new self-sufficient brigade combat teams. An experimentation and trials group will try out new technologies.

There will be some restructuring and reorganisation of units over the next four years. The regular army will be 73,000 strong by 2025, which combined with an army reserve of 30,000 means the army headcount will stand at more than 100,000.

“For too long the historic infantry structures have inhibited our army’s transformation. We cannot afford to be slave to sentiment when the threat has moved on,” Wallace said.

Every unit would be affected in some way by the changes, he said. By 2025 the army HQ’s regular personnel will be reduced by 40% and reserve integration will be made more productive.

Reservists will play a pivotal role in homeland protection and resilience operations. A new reserve brigade based in York will ensure crises on the home front, such as the Covid pandemic, are met at points of need.

There are changes to limits on promotion, plans for a soldier academy to mirror the prestige of Sandhurst, and a new career management system “fit for the digital age”. A mental health team within the field army will support wellbeing.

Wallace said the changes would result in “a credible and relevant, relentlessly adapting force that will confront the threats against the nation and meet the challenges of the future”.
#Covid
Add Comment