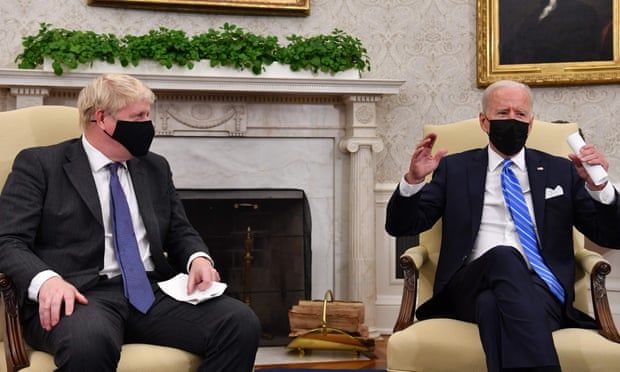 Britain’s hopes of a post-Brexit trade deal with the US have all but evaporated barring a dramatic change of heart from Joe Biden, it emerged on Tuesday as Boris Johnson held face-to-face talks in the White House.

Johnson once regarded a bilateral free trade agreement with the US as a key Brexit win, highlighting the prospects for British exporters unfettered from the EU. But government insiders privately concede that they see little prospect of progress towards a one-to-one deal, as the Biden administration focuses on other priorities.

When Johnson was asked on Tuesday whether he still hoped to strike a free-trade agreement with the US by the time of the next general election, opening the way to lower tariffs and a closer economic relationship, he said “we’re going as fast as we can”, but declined to confirm whether it could be achieved before 2024.

When the US president was asked about the prospects of a deal as the pair met in the Oval Office, he said: “We’re going to talk about trade a little bit today, and we’re going to have to work that through.”

The UK is now understood to be considering alternative options, including seeking to join the US-Canada-Mexico trade deal instead of striking a bilateral agreement with Washington.

A senior government source said: “There are a variety of different ways to do this. The question is whether the US administration is ready. The ball is in the US’s court. It takes two to tango.”

The government is understood to have made the point to the US that after signing a string of recent bilateral agreements, Britain now has closer trade relations with Canada or Mexico than the US despite the so-called special relationship.

Johnson was keen to showcase the strength of his relationship with Biden on his US trip after a fraught summer in which the UK appeared to be denied key information about the US withdrawal from Afghanistan. He has claimed the US-UK partnership is at its strongest for “decades”.

Biden also underlined the importance of ensuring peace in Northern Ireland is not jeopardised by post-Brexit tensions.

“I feel very strongly,” he said. “We spent an enormous amount of time and effort in the United States. It was a major partisan effort, and I would not like to see – nor would many of my Republican colleagues – a change in the Irish accord”.

Speaking to US broadcaster NBC on Tuesday, Johnson played down differences with Biden over the Afghanistan withdrawal, which led to the Taliban capturing Kabul and the chaotic evacuation.

Asked if he had been forced to wait 36 hours to speak to Biden directly about the situation in Afghanistan, he said: “I don’t discuss my calls with other leaders but to the best of my recollection we talked very frankly about the whole thing.”

Pressed on whether he agreed with Biden’s decision to set and stick to a date for the withdrawal of US troops from Afghanistan, he said: “America has been there for 20 years and it’s a respectable argument to say ‘enough is enough’.” He added: “Could we have done things differently? Perhaps we could.” 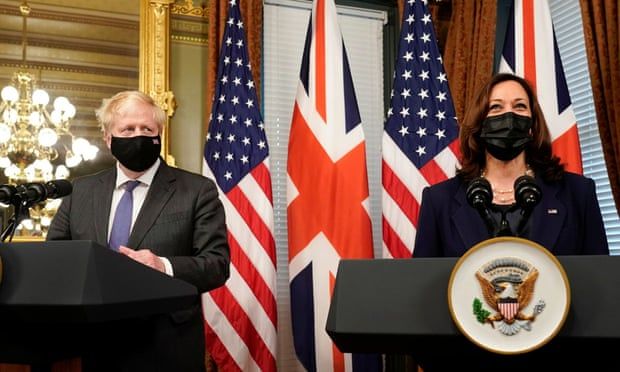 Boris Johnson, the UK prime minister, meets Kamala Harris, the US vice-president, on Tuesday before his meeting with Joe Biden.

The foreign secretary, Liz Truss, who is travelling with Johnson, said she hoped to link trade and diplomacy more closely in her new role, highlighting the potential for UK jobs from the Aukus security deal announced last week.

Trade was not among the issues Downing Street highlighted before the discussion between Johnson and Biden, who met in the Oval Office. Instead, the prime minister was expected to raise the climate crisis, Aukus and details of the US’s new travel regime.

The UK had appeared blindsided by the travel announcement on Monday, with Johnson warning journalists en route to the US that “I wouldn’t hold your breath” for developments this week.

As he arrived in Washington by train from New York, Johnson welcomed Biden’s announcement of a significant increase in US climate funding for developing countries, raising the prospect that the $100bn (£73bn) target set a decade ago could be reached before the Cop26 summit in November.

Biden told the UN general assembly that the US would double its contribution, from $5.6bn to $11.2bn. Johnson said the announcement was “game changing,” and he wanted to see similar levels of ambition from other rich countries.

The US and UK have worked closely on the climate but little progress has been made in recent months on deepening trade ties. Biden only appointed a chief agricultural trade negotiator, Elaine Trevino, last week, and has not yet appointed a new ambassador to London. Agriculture would be likely to be a key element of any deal.

Meeting Kamala Harris, the vice-president, before seeing Biden, the prime minister said there had been “real progress” on trade, citing the lifting of the “curious” US ban on exports of British beef.

He also praised the US decision to double its contribution to climate financing. “Today was a great day for the world, he said. Harris replied: “It was.”

Johnson will remain in Washington overnight and meet a string of senior congressional figures on Wednesday, including House speaker Nancy Pelosi, fresh from a visit to the Chorley constituency of her UK counterpart, Lindsay Hoyle, the Speaker of the House of Commons.

After the scramble to pull out of Afghanistan, Conservative MPs warned the prime minister that bilateral relations with the UK had been allowed to deteriorate since Biden’s election, and urged him to deepen connections with the new White House.