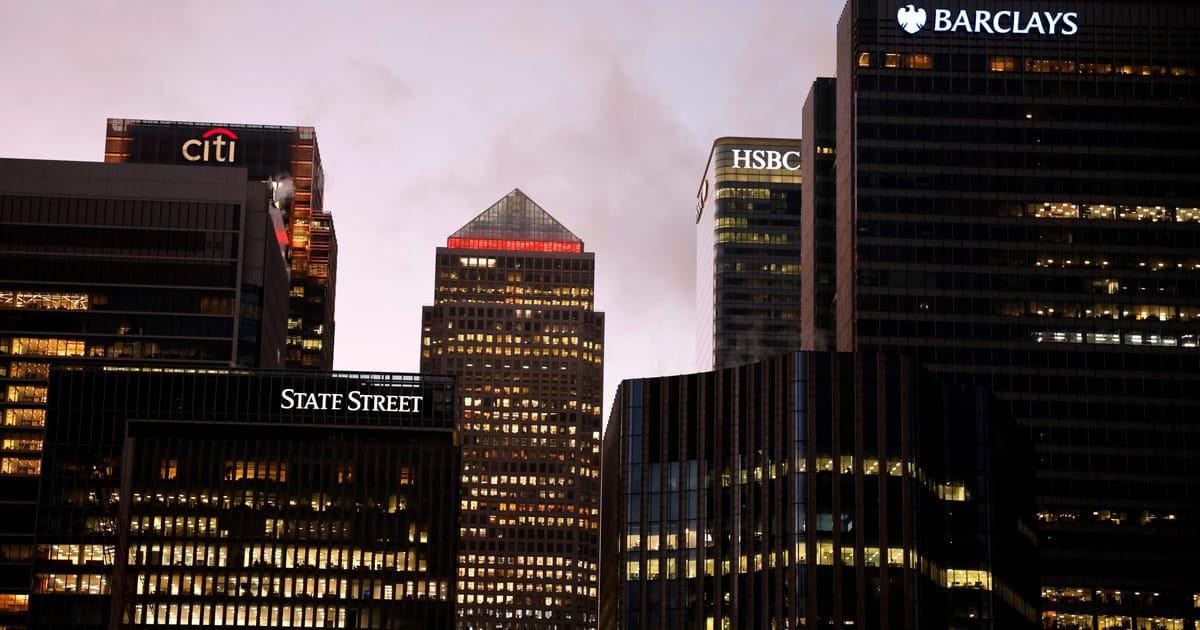 London’s grip on a key part of Europe’s financial system worries Brussels’ policymakers.
Of all the spoils of Brexit, there's something the EU is still desperate to get its hands on.

Almost three years after the U.K. left the bloc, Brussels is eyeing up a key section of London's financial services industry. And if Europe's top brass were keen on that before now, Britain's disastrous budget in September under the short-lived premiership of Liz Truss has only spurred them on.

On Wednesday, the European Commission unveiled its plan to wrest control of one of the essential parts of the plumbing of the financial system — after previously comparing London's dominance of it to the EU's awkward reliance on Russian gas.

"This is not policy for me, this is politics," said Karel Lannoo, chief executive of the Centre for European Policy Studies (CEPS). "There was already suspicion that [the EU] couldn't trust the U.K. After September, October, that's now 100 percent sure."

The Truss government's plan for unfunded tax cuts in its mini-budget three months ago spooked markets and raised government borrowing costs, creating a "doom loop" of selling at U.K. pension funds that ultimately required an intervention by the Bank of England — and caused Truss' downfall within just 50 days in office.

It played into the hands of those in Brussels, Paris and Berlin, who want to be totally in charge of Europe's financial stability.

Wednesday's Commission announcement was about the practice of clearing euro derivatives. After Brexit, it became the one area of U.K. financial services that continued to benefit from access to the European single market. As the financial crisis highlighted more than a decade ago, clearinghouses are a key tool in controlling risk and preventing contagion, and the potential threat to the EU from a sudden cutoff trumped the political urge to get one over the Brits.

But it left a feeling of uneasiness. The scars of Brexit are still raw and there remains a desire to control in Europe what is European. It was Mairead McGuinness, the EU's finance chief, who previously linked the bloc's dependence on London for clearing to its thirst for Russian oil and gas.

"This only arose because of Brexit," McGuinness told journalists this week. "We wouldn't be having this conversation with this proposal if London was still at the heart of our financial system."

Since Brexit, London has lost EU business because the U.K. generally no longer has access to the single market. It's seen Amsterdam become a European hub for share trading.

Still, the City remains Europe's biggest financial center by far and, for some, that rankles.

William Wright, managing director of the New Financial think tank, said clearing had “become symbolic” because a shift out of London would have a limited economic impact.

“It comes down to an insurance policy rather than a land grab,” he said, arguing financial stability concerns were driving the EU's actions.

The Commission insisted its plan was not about taking business from London but about protecting the bloc.

At the moment, EU banks and investors depend on London’s dominant clearinghouses — LCH and ICE Clear — which act as middlemen to guarantee trades worth trillions of euros and monitor and manage the risks involved. A shift to Europe could benefit places such as Eurex in Frankfurt.

But just like 2017-2019 when it was discussed as part of the wider negotiations on how the U.K. would leave the EU, the Commission is finding that financial services realities can douse political ambition. Its new plan is less tough than some of the options the industry had feared. Under the plan, European banks and investors will have to open accounts at clearinghouses within the EU — but can still keep them in London too.

The bloc’s markets authority will then be tasked with defining how much activity should take place through those continental accounts and ratchet it up over time — to the point where U.K. levels are no longer seen as posing a threat to the EU’s financial system.

An EU official said the proposals wouldn’t be “disruptive” and would “move with the grain of the market.”

But that's precisely why, for some, there's a fear the plan might fall short.

There needs to be a carrot-and-stick approach to get euro clearing out of London, Markus Ferber, a German MEP for the center-right European People's Party, said in an emailed comment.

"It is unclear if the proposed measures are enough."
Add Comment