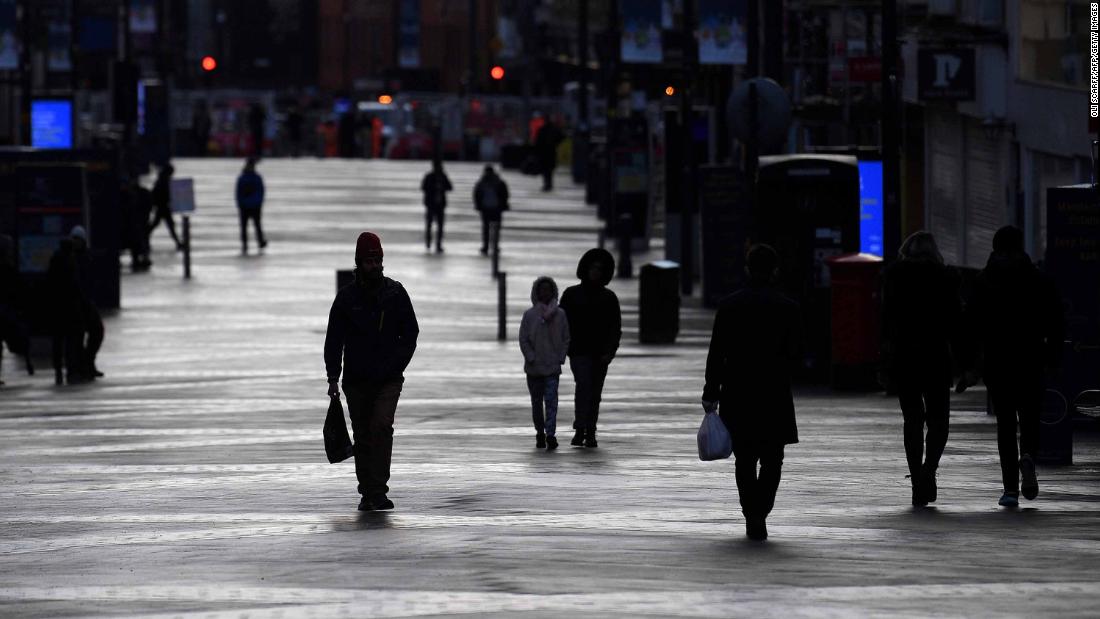 Britain is under lockdown. But one year into the Covid crisis, many are unable to keep to the rules

Anna says she did not want to break the UK's Covid-19 lockdown rules.

The 37-year-old has worked through the pandemic. Anna says she cleans an office building in London which is open but nearly empty, as most staff are working from home.

It's a job the Ecuadorean native has done for five years, after moving to the UK from Spain in 2013 while looking for work. CNN is not disclosing Anna's real name as she fears repercussions from her employer.

Anna's employer insisted that she continue to clean the building during the pandemic but cut her hours from five a day to four. She earns £10.75 ($14.77) per hour.

"I have been forced to go to work in a nonessential building," she told CNN. "There is no one at work, I'm alone."

Last month Anna caught Covid-19. She's unsure where she picked it up from but said it was likely "on the bus or on the Underground." She lives in south London in a shared house and says that at first the virus left her exhausted.

"I had a lot of coughs, fever, fatigue... and dizziness," she said. "And I [am taking a long time to recover] because this disease is very painful [and] horrible."

But after staying home for a few days as she recovered from the disease, Anna decided to go into work, as she was only receiving partial pay.

UK government rules state that while recovering from Covid-19, patients should self-isolate for at least 10 full days.

"I only felt tired and [had] a headache," she said. "That is why I went to work -- I also couldn't afford to stay at home because I received very little salary.

"I feel guilty that I went to work and infected more people, [but] I had no other option." 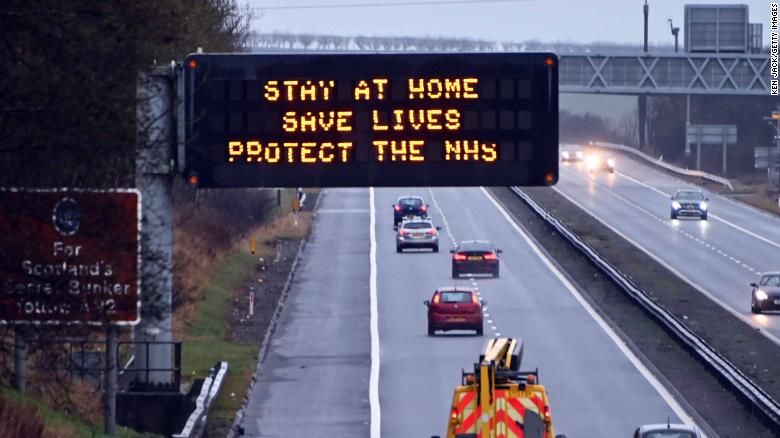 An illuminated motorway sign carries the "Stay At Home" message, on January 10 in Dunfermline, Scotland.

Breaches of self-isolation rules are rampant across the UK. Up to 20,000 people a day are failing to stay home when instructed to, according to Dido Harding, who is in charge of the country's coronavirus Test and Trace scheme.

"These numbers are moving a lot," Harding told a parliamentary committee this week, adding that "circa 20,000 people a day" were currently not isolating.

Harding said she was also concerned about people who were experiencing symptoms but had avoided being tested.

For the British government, the lack of compliance is a significant worry.

"My biggest concern is...the people who feel ill but don't come forward for testing at all," Harding said.

One popular stereotype paints lockdown breakers as young and irreverent people who insist on attending house parties and meeting friends.

But experts say the picture is more nuanced. The British public strongly supports lockdown, according to a YouGov poll released in January. Those who are not abiding by the rules often cannot afford to do so.

"There's so much emphasis on people not breaking the rules, but the majority are actually following the rules," says Muge Cevik, a clinical lecturer in infectious diseases and medical virology at the University of St. Andrews in Scotland.

Cevik and her colleagues recently published an article in the British Medical Journal urging the government to offer greater support to people self isolating.

Their paper points to a successful test-and-care model in San Francisco, which helped people isolate by ensuring home deliveries of goods, among other measures. A similar scheme in New York, which allowed people to opt to isolate in hotels, is also singled out for praise in the article.

"We're seeing huge outbreaks in warehouses, meat-packing plants, care homes ... the only thing that combines these sectors are low-paid workers, likely to live in crowded houses."

In September 2020, the UK government rolled out a new package to support those in self-isolation. Lower income earners having to stay home may be eligible for a payment of £500 if they face losing pay. The penalty for those breaching lockdowns also increased, with those caught now facing £1,000 ($1,370) fines.

"This new Test and Trace Support payment of £500 will ensure that those on low incomes are able to self-isolate without worry about their finances," the UK government said in a statement in September.

But the £500 payment comes with stringent requirements -- to be eligible people need to already receive some form of UK government benefit, such as universal credit, working tax credit or housing benefit. Earlier this week, a study published by the Trades Union Congress found that fewer than 40% of applications for the grant were successful.

Harding acknowledged during her committee appearance that lack of financial support was one reason that people failed to isolate.

Cevik and her colleagues believe more needs to be done, including offering those in crowded homes the chance to self-isolate in separate accommodation, to curb the virus' spread.

"If someone has tested positive, [then] at the time of testing, we could be asking them 'do you have space to isolate? And do you get sick leave?'" she says.

"These [resources] need to come as a package -- income relief, sick leave [and] accommodation is needed."

Anna says she would "of course" have stayed home if she had been given more support.

"I would have stayed home from the first day," she told CNN. "I felt bad, but ... low-wage workers had no choice." 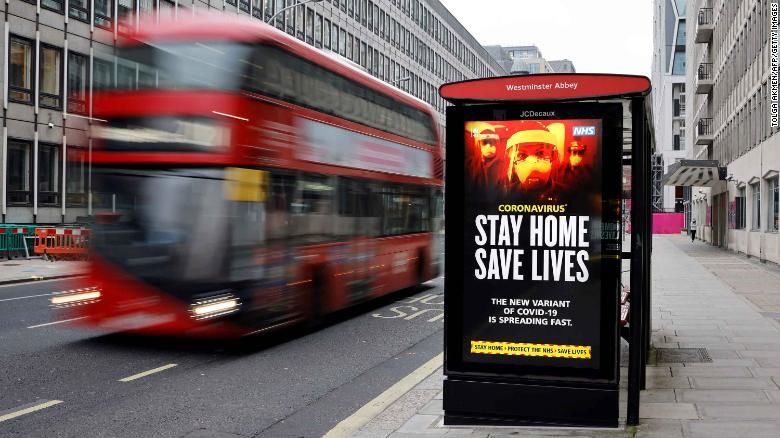 A digital display at a bus station warns pedestrians of the new strain of coronavirus in central London on January 8.

"I don't blame people who are desperate, and [make that choice to work]," says Yaseen Aslam, president of the ACDU, a union representing private hire and courier drivers in Britain.

"I know a driver who had to isolate four times in two months, How does that work?" Aslam told CNN.

"And when you're in a desperate situation, you take risks. People are choosing between their life and just being out there."

Uber, among other companies, has piloted a scheme to help protect drivers and passengers by installing partitions in 400 cars, as suggested by government guidelines. The pilot scheme was done in partnership with motoring assistance group, the AA, across Newcastle, Sunderland and Durham, in northern

England. But outside the scheme, drivers must decide whether to pay to install the screens.

But one driver, who asked not to be named because he feared retribution from his employer, said he and his peers were not installing the screens as they simply could not afford to.

Aslam also works with the International Alliance of App-Based Transport Workers, an organization that brings together private hire drivers worldwide.

"I work with drivers in France, Amsterdam, San Francisco [and so on,]" he said. "We're seeing these problems across the world. But no one is trying to help us."

Early 2021 has been marked across Europe with an outburst of frustration against lockdowns, with protests being held across Austria, Hungary and the Netherlands. The Dutch demonstrations lasted for a few nights in late January and turned violent.

Anti-lockdown protesters have also taken to the streets in the UK, most notably in multiple demonstrations in November 2020. Dozens of people have been arrested during the marches, at which some protesters have shared conspiracy theories about Covid-19.

"If people feel vulnerable, then they will comply with lockdown rules," Pamela Briggs, a professor of applied psychology at Northumbria University, told CNN.

"For those who feel less vulnerable, then compliance becomes more of a matter of civic duty.

"If you're going to make sacrifices then you have to believe they'll be effective," she adds. "The problem comes when people can't understand why they are being asked to do these things... if people feel the rules don't make sense, they're more likely to challenge them."

Briggs believes that people need to believe their sacrifice in staying home is worth the personal cost. The UK's three lockdowns have, to various extents, helped to curb rising cases.

"We could make people feel that their sacrifices are genuinely having an effect," Briggs said.

"There are ways to demonstrate the efficacy of lockdown and more should be done."

One year into the Covid crisis, the UK government continues to use lockdowns as a last resort. Some good news awaits on the horizon -- cases are beginning to drop and the country's vaccine rollout has been widely praised. What officials now face is the challenge of helping people stay home, in the face of overwhelming mental and financial fatigue.