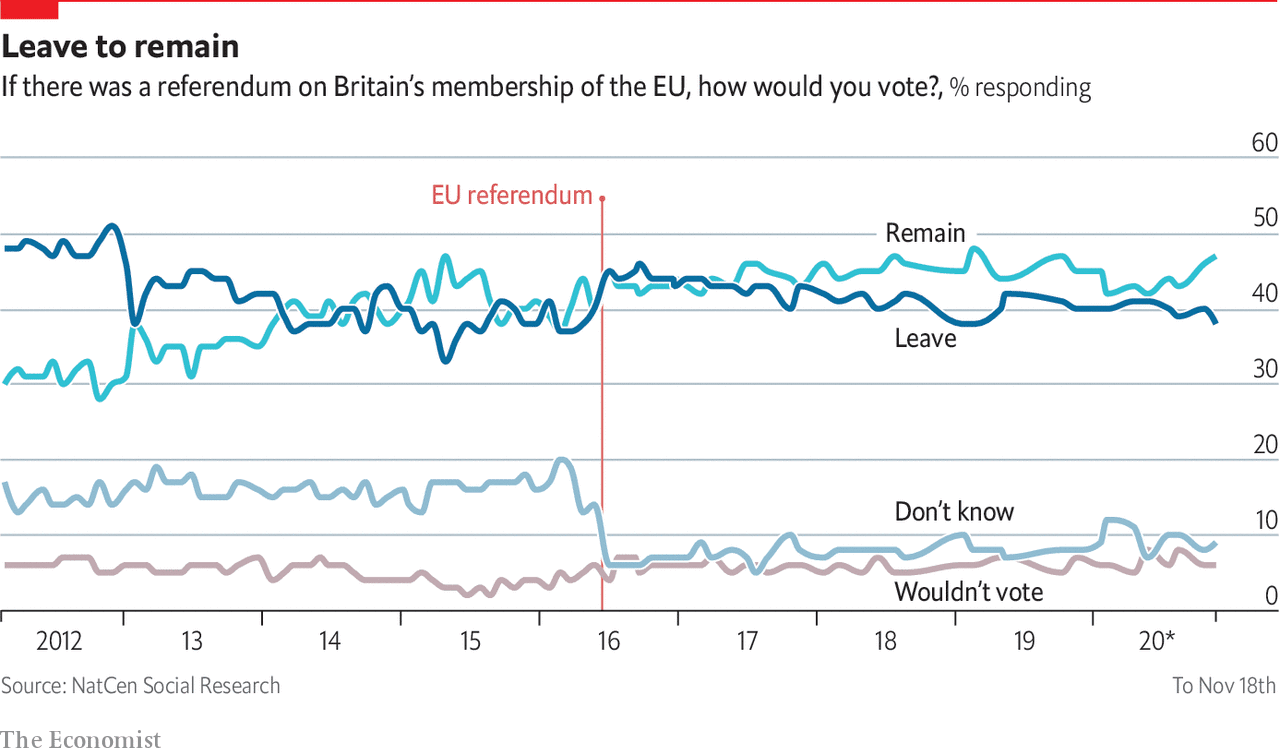 Britain is heading for a hard Brexit. Voters now prefer none at all

With trade talks in their final days, Britons’ attitudes to the EU have changed significantly since 2016
THE SIGNALS from the fraught trade negotiations between the EU and Britain seem to change by the hour. Big disagreements remain over fisheries, level-playing-field rules for competition and the governance of any deal. But both sides insist they still want a deal. The two chief negotiators, Michel Barnier for the EU and David Frost for Britain, shuttle frantically between Brussels and London.

Boris Johnson, Britain’s prime minister, and Ursula von der Leyen, the president of the European Commission, have spoken twice by telephone. Yet, even as December 31st approaches, when Britain’s transition period ends, a deal remains elusive. After the second call, on December 7th, Mr Johnson and Mrs von der Leyen said that “the conditions for finalising an agreement are not there” and that they would meet in Brussels “in the coming days”.

Easily lost in the rush of these last-minute negotiations is the state of public opinion in Britain. In the referendum in June 2016, voters backed the option to leave the EU by 52% to 48%. And in the general election of December 2019 they gave Mr Johnson, a hardline Brexiteer who campaigned to “Get Brexit Done”, a massive majority. That might point towards rising support for the decision to quit the club. Yet Sir John Curtice, the doyen of British pollsters, who has recently updated his opinion surveys for NatCen, a research institute, concludes otherwise.

His analysis suggests that, if a referendum were held today, a clear majority would vote to remain in the EU. Indeed, the share of remainers in the electorate is near its all-time high (see chart). The latest polls put the Remain camp nine points ahead of Leave (by 47% to 38%). As Sir John points out, this is not because many of those who voted to leave have changed their mind, but rather because former “don’t knows” now break almost two-to-one for remaining. The shift also reflects changing demographics: the majority for leaving came overwhelmingly from older voters, so the balance is shifting as younger voters take their place.

In separate polling analysis, Sir John finds that leaving the EU with no trade deal is even more of a minority preference. From his survey of the evidence, he reckons that no more than a fifth of voters favour the idea. He also concludes that support for Scottish independence has risen significantly because of Brexit, which Scotland voted against by a large margin in 2016. Some 51% of Scottish voters now support independence, a rise of five percentage points since the Brexit referendum.

In short, even as Mr Johnson faces a difficult choice between a hard Brexit with a trade deal or an even harder Brexit without one, popular support for the very idea of leaving the EU has declined. And the threat that a hard Brexit poses to the United Kingdom has also increased. Should the consequences of Brexit prove messy after December 31st, Mr Johnson’s already falling popularity with British voters may go down further.
#Boris Johnson
Add Comment