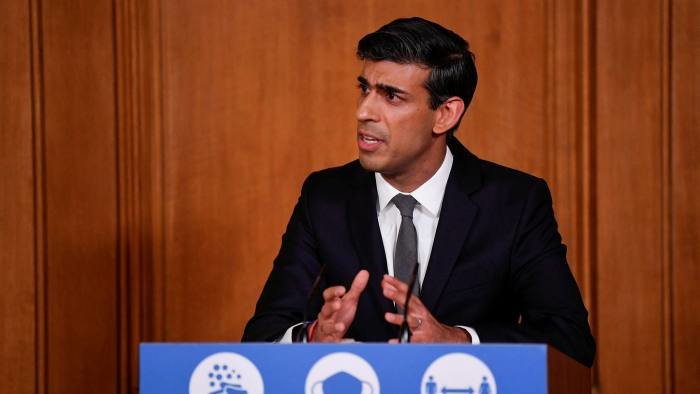 Rishi Sunak, the chancellor will need to raise taxes by more than £40bn a year by 2025 to stop public debt spiralling upwards, according to forecasts by the Institute for Fiscal Studies.
In an assessment of the state of Britain’s public finances, the think-tank said government borrowing was set to reach £350bn, or 17 per cent of gross domestic product, this year, the highest level in peacetime in more than three centuries.

That compared with the £55bn forecast by the Office for Budget Responsibility at the March Budget.

Around two-thirds of the increase is owing to extra spending to bolster public services and limit the economic impact of the pandemic — fiscal support that had been necessary, the IFS said, adding that with borrowing costs low, “additional spending now that helped to deliver a more complete recovery would almost certainly be worth doing”.

But the think-tank forecast borrowing would still be more than £150bn in 2024-25 in a central scenario, even if none of this extra spending was continued. Public sector net debt would at best be close to 100 per cent of national income, or as much as 130 per cent in a worst-case scenario.

A government that wanted to keep debt constant at 100 per cent of GDP, with borrowing at £80bn a year would need to tighten fiscal policy by 2 per cent of GDP by 2024-25, the IFS found. That amounted to more than £40bn in today’s terms, even before an ageing population added the pressure on government to keep spending.

The dire long-term outlook for the public finances is largely owing to the UK’s poor economic prospects.

Christian Schulz, chief economist at Citi — whose forecasts underpin the IFS fiscal projections — said a recent rebound in economic activity should not be mistaken for a recovery, with UK output likely to remain 7-10 per cent below pre-pandemic levels at the end of the year. It would still be almost 5 per cent short of its pre-pandemic trend at the end of 2024, the bank forecast.

Britain was underperforming almost every other country in the OECD, with the exception of Spain, he said, partly because its initial lockdown had lasted longer and partly because its reliance on services and high degree of urbanisation made it especially vulnerable to the Covid-19-crisis.

There were good reasons to believe the UK was now entering a vicious cycle in which consumers would spend less and businesses cut jobs in response — with job destruction that had been masked by the furlough scheme set to become visible, he added.

The warning of looming job cuts reinforces separate research published on Monday by the think-tank IPPR, which said that around 1.8m viable jobs would be in jeopardy when the UK’s full furlough scheme ends later this month.

The Job Support Scheme that is set to replace it — even when combined with a £1,000 bonus for retaining previously furloughed workers — would not make it profitable enough for employers to preserve jobs, the think-tank said.
#COVID-19  #Covid
Add Comment