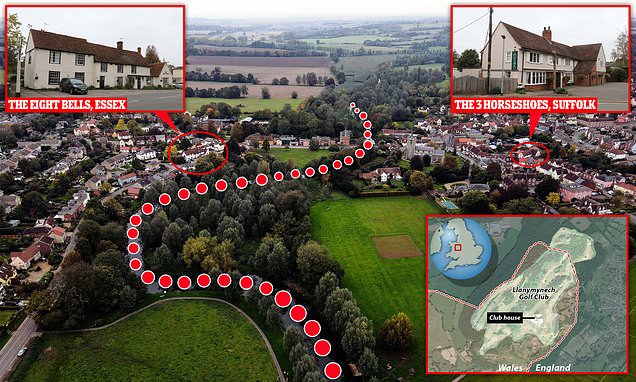 From a golf course that straddles the border between Wales and England, to towns, villages and even individual properties split across different Covid restriction tiers, Britain is divided,

Thousands of Brits are facing a dilema as towns, villages and even homes are split across different 'tiers' of coronavirus restrictions.

An Essex woman is free to drive hundreds of miles around England, but cannot visit her neighbour on the other as her property is split across two councils with opposing restrictions.

Golfers at a course that straddles the border between England and Wales face a similar conundrum ahead of Wales going into a 'circuit breaker' lockdown at 6pm on Friday.

The owners might have to close their clubhouse on the Welsh side, but will be able to keep the course open across the border as 15 of their 18-hole course are on the English side.

While a pair of pubs in Bures are separated by a mere 350 yards, but have to adhere to different rules as the village straddles the counties of Suffolk and Essex.

One pub will have to close as Tier 2 restrictions come into force in Essex, while punters will be able to come and go freely down the road in Suffolk, where Tier 1 restrictions are not so strict.

It comes amid other coronavirus developments:

*  ONS figures show the number of people dying of Covid-19 in England and Wales rose for the fifth week in a row to 438 between October 3 and 9;

*  Welsh First Minister Mark Drakeford has defended imposing a 'firebreak' lockdown despite case rates being below the UK average. The move meant  England is the only UK nation to hold back from measures;

*  Ireland's premier last night announced a six-week shutdown of the Republic with draconian curbs on movement, despite no new deaths being recorded;

*  Nicola Sturgeon has signalled that 'circuit breaker' restrictions on households mixing are likely to stay in place for longer;

*  A leaked memo from No10 advisers has warned the PM can't keep saying no to Ms Sturgeon's referendum demands, urging ministers to 'placate' her with more powers. 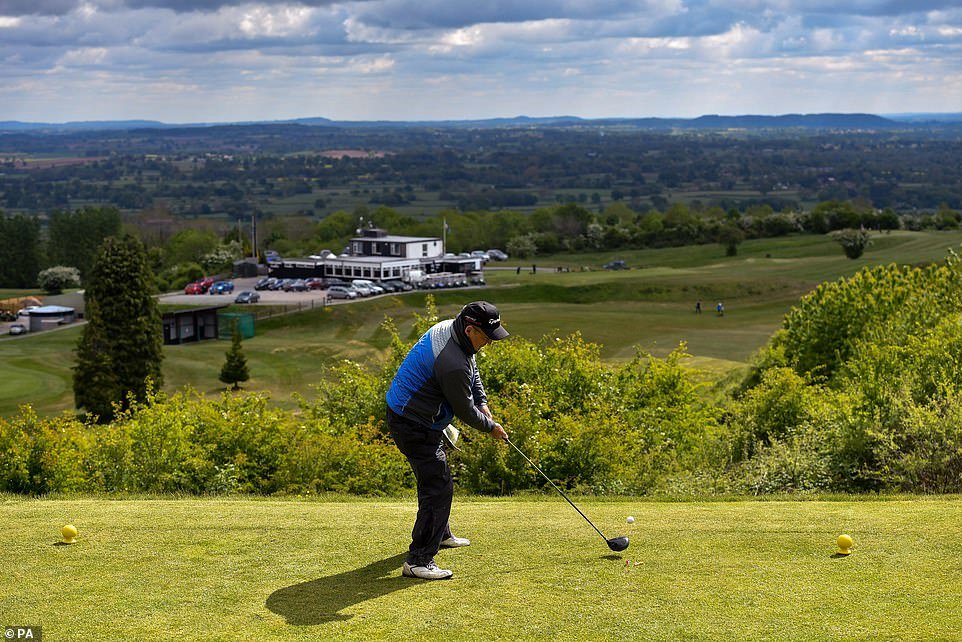 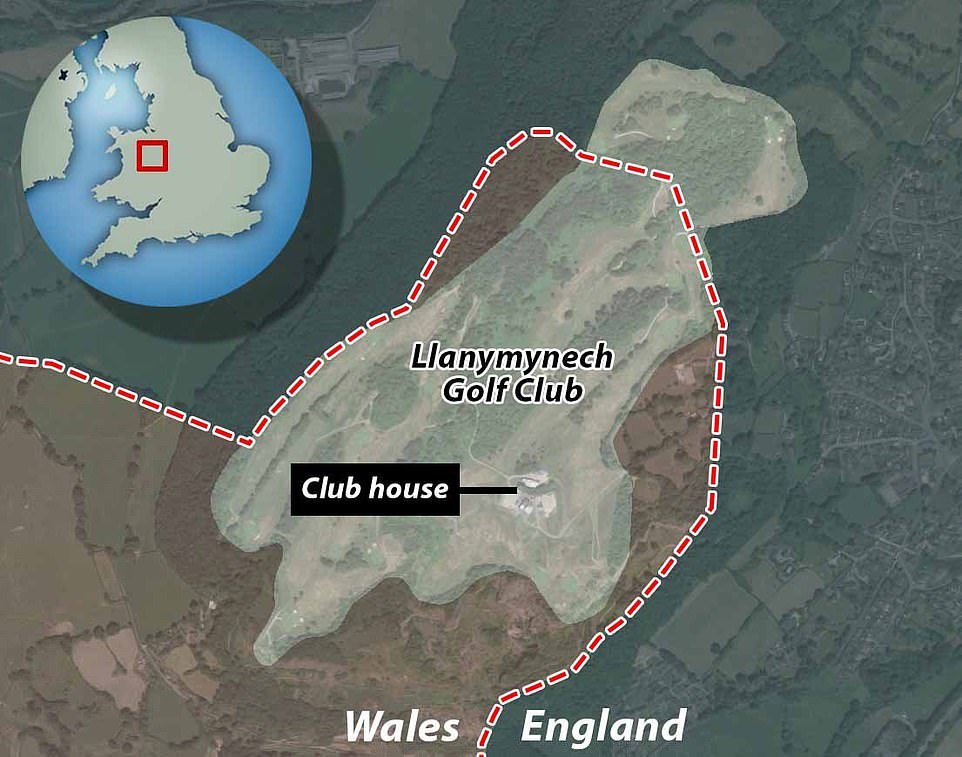 Llanymynech Golf Club Club officials are holding talks over how the course will deal with the situation when Wales introduces a circuit breaker lockdown from 6pm on Friday, as most of the course is in Wales but the other section is in England 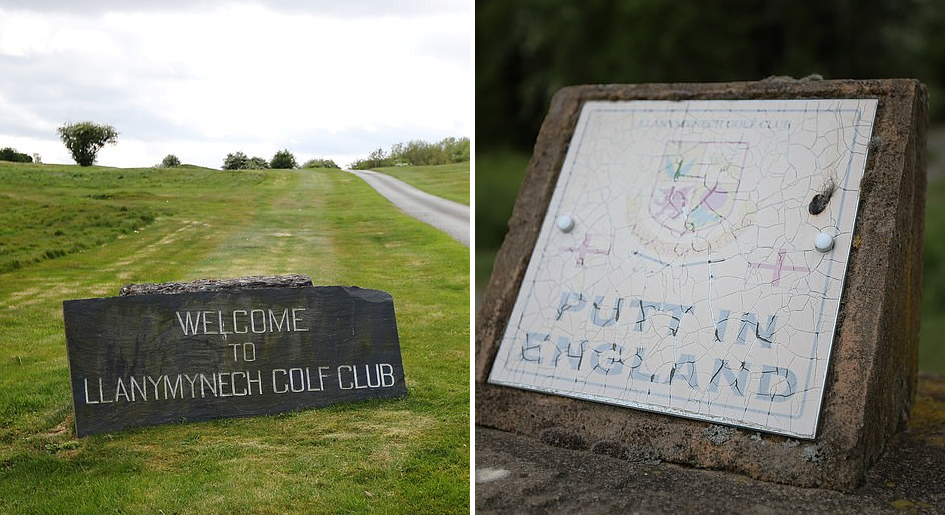 The golf club might have to close their clubhouse, which is on the Welsh side of the border, but could still keep the course open as a majority of the 18 holes are in England

The ridiculous examples of divided Britain have prompted calls for the Government to 'trust people's judgement and common sense' instead of carving up the country into different restricted areas.

Hearing about one such example, Tory MP Sir Graham Brady said: 'This is a classic example of the crazy situations that arise when you go down the route of arbitrary rules rather than trusting people's judgment and common sense.

'It is time we trusted the public as grown-ups as to how they go about their lives. Lines on a map are splitting up families and friends and leading old people to become isolated and lonely.'

As Wales faces two weeks of a circuit breaker lockdown from 6pm on Friday Llanymynech Golf Club Club officials are holding talks over how the course will deal with the situation.

Golfers are in Powys, Wales when they tee off for the first four holes on the par 70 course, they cross the border into Shropshire, England for the fifth, sixth and seventh, then return to Wales for the remainder.

The course proudly touts itself as 'Europe's only dual country course'.

The only road leading up to the course which overlooks the both countries, is completely in England.

'We are a member of the England Golf Union and therefore abide by its rules,' said Sandy Johnstone, on the club's committee.

However the club house is licensed by Welsh authority, Powys County Council.

'It maybe that we shall have to close the club house but keep the course open,' he said.

'That is what we did when it was decided that golf courses could re-open. We are holding meetings this week to talk through the situation and the best way to deal with it.'

They are not the only one facing difficulties over the varying restrictions across the UK to curb the spread of the virus. 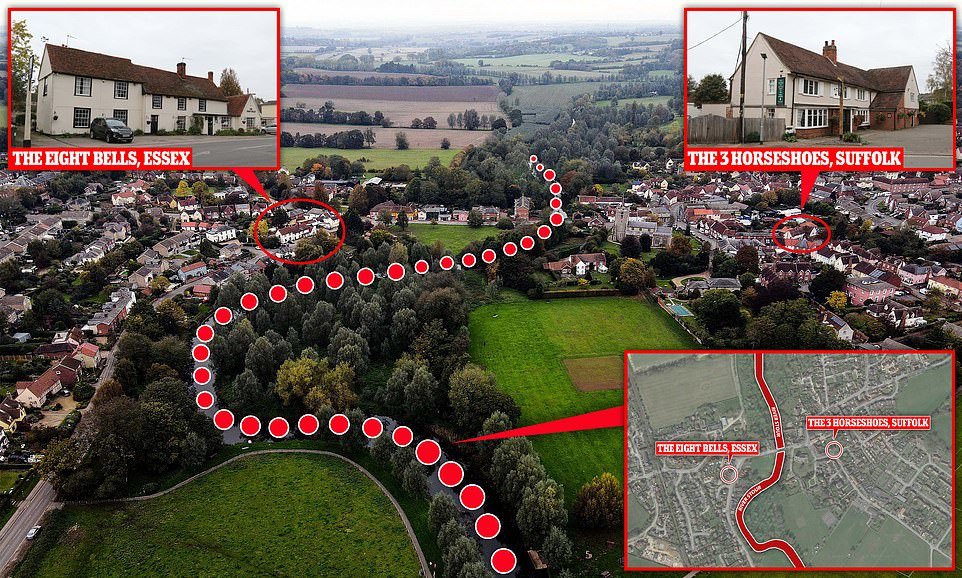 A mere 350 yards separates the The Eight Bells and Three Horseshoes, both of which are in the small English village of Bures 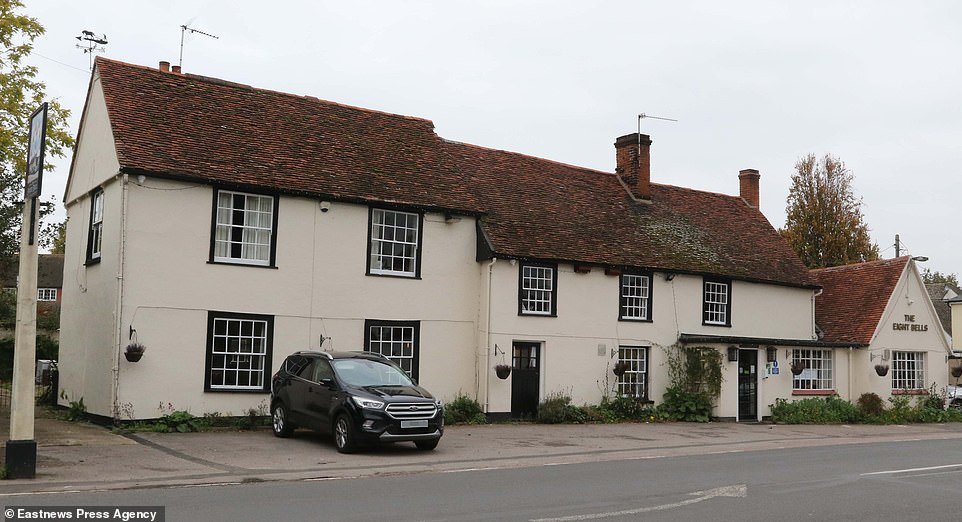 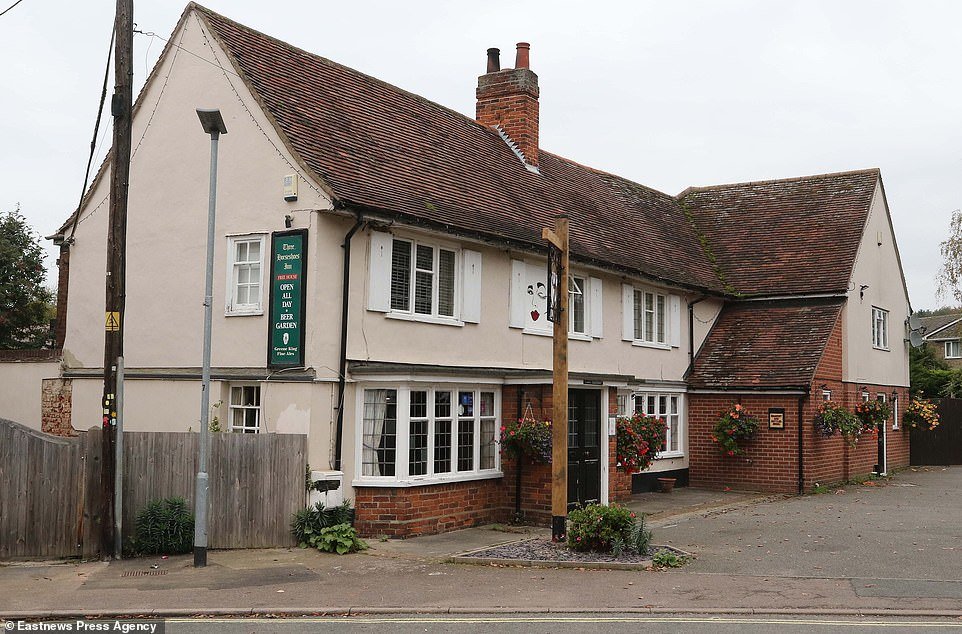 However the The Three Horseshoes (pictured), which is on the Suffolk side of the village, is under Tier 1 restrictions

Two pubs, the The Eight Bells and Three Horseshoes in Bures have been hit with different Covid rules, meaning locals are free to socialise with friends in one but banned in the other.

The pubs are in the same village, but split by the River Stour which marks the distinction between Suffolk and Essex.

The village, home to around 1,400 residents, has been split into different categories of the government's Covid alert system.

While Suffolk was classed as a Tier 1 area, neighbouring Essex was classified as a 'high risk' infection zone - making it Tier 2. The split came into force at midnight on Saturday. 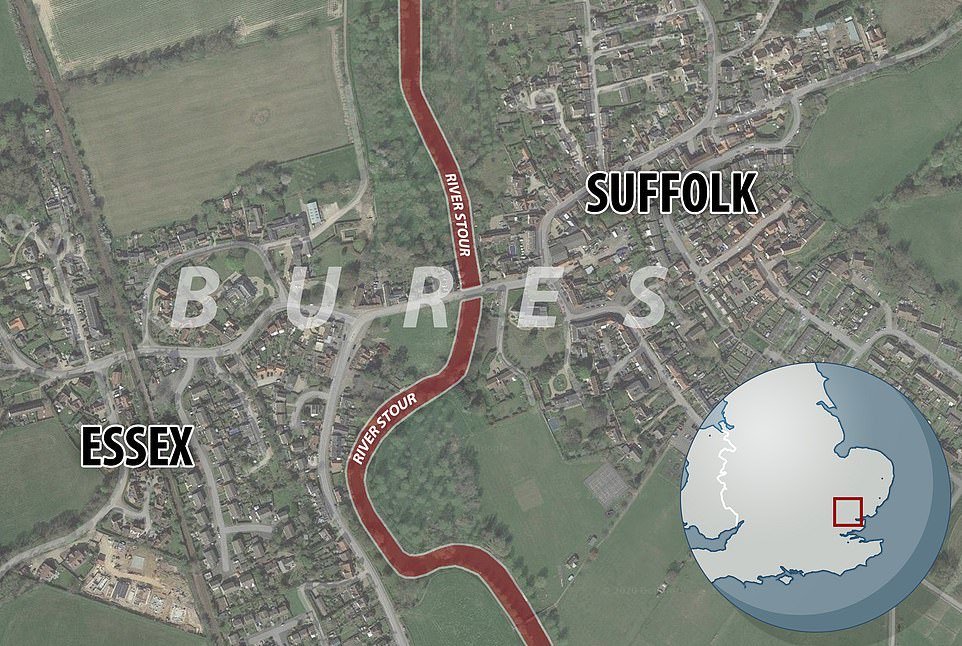 While Suffolk was classed as a Tier 1 area, neighbouring Essex was classified as a 'high risk' infection zone - making it Tier 2. The split came into force at midnight on Saturday, creating problems for the village of Bures which is split across both tiers 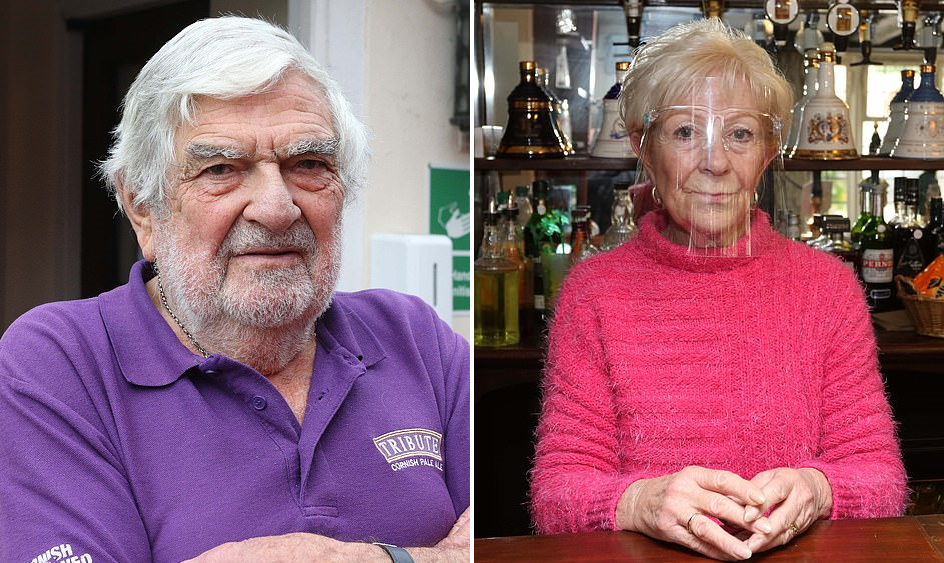 Those living in the Essex half of the village are now no longer able to meet for a drink with other households indoors, while those on the Suffolk side can, providing they stick to the government's rule of six.

Willy Amos, 83, landlord of the Eight Bells, said: 'It is a bit confusing, they can come over here and we can't go over to there - it's a tale of two villages.

'We have only really had one day of it, we don't have a clue what is going to happen, it certainly is not going to help.'

The great-grandfather added: 'I've never known anything like this in my 40 years running the pub.'

At the Three Horseshoes in Suffolk, landlady Pat Mulcahy, 71, says she won't act as a border guard and check drinkers' documents before serving them. 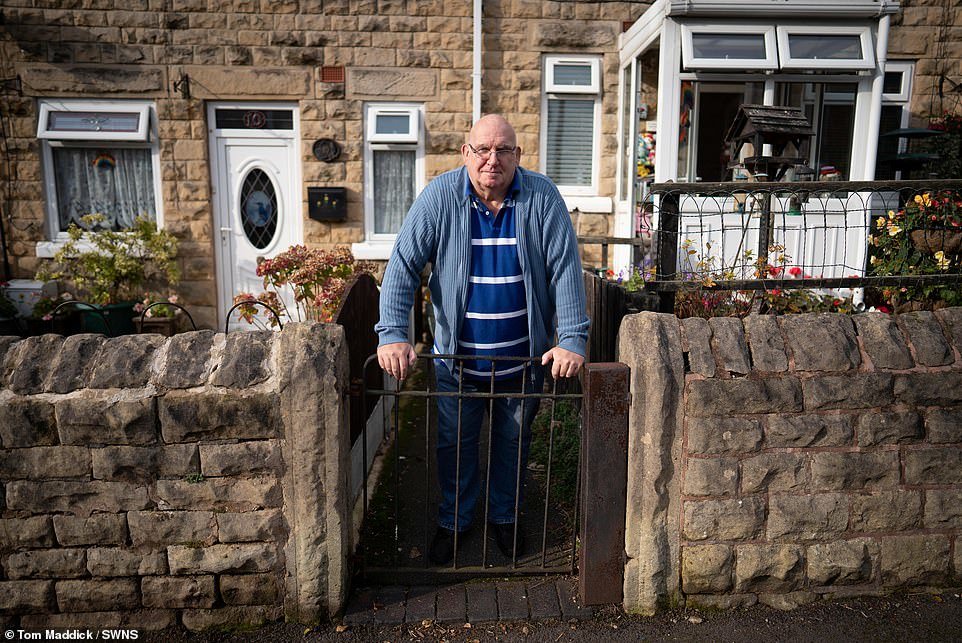 Dave Mather, 69, lives in the Midlands townof Langwith which is split over two counties and is also facing two different sets of rules 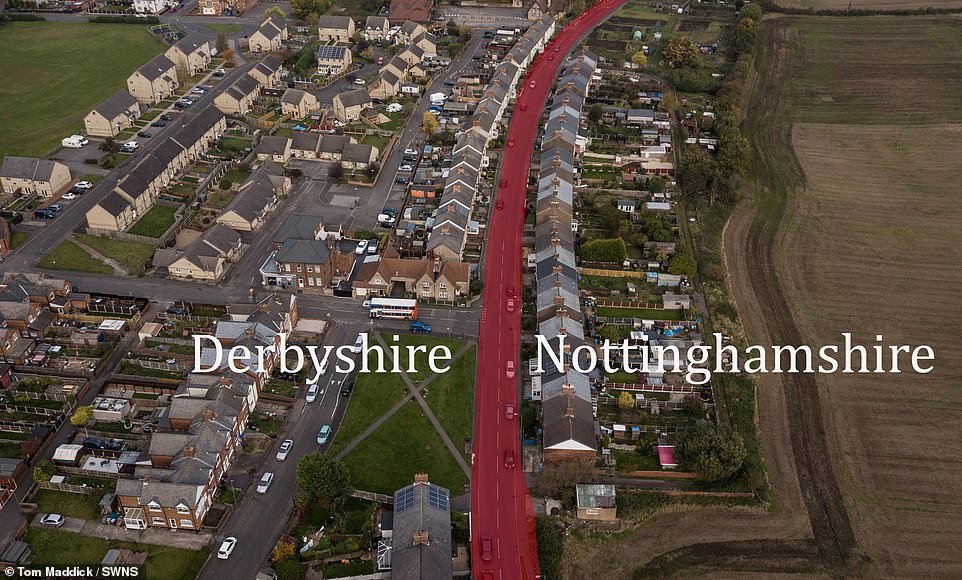 Langwith village straddles Derbyshire and Nottinghamshire, both in different tiers, with the invisible border running right through the middle of the town 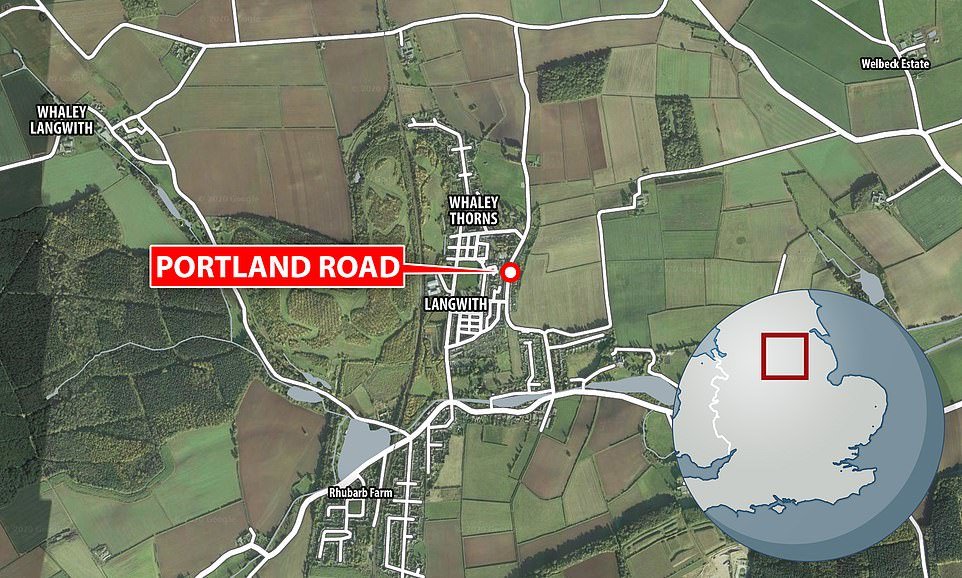 She said: 'I suppose there's a temptation to mix but a long as my rules are followed its up to the individual really.'

The publicans are not the only ones saying it is difficult to take the rules seriously.

Dave Mather, 69, lives in a Midlands town split over two counties and is also facing two different sets of rules.

The village of Langwith straddles Derbyshire and Nottinghamshire with the border runing straight down the middle of Portland Road.

Derbyshire residents on the east side of town are under tier one restrictions, while those on the west side are in Nottinghamshire under tier two.

Mr Mather cannot see his neighbours despite their homes standing only 25 feet away - and can only shout over his bedroom wall.

He told The Birmingham Mail: 'Tier one ends at my garden wall. The village has been divided in two, that's not right. The whole thing is silly.' 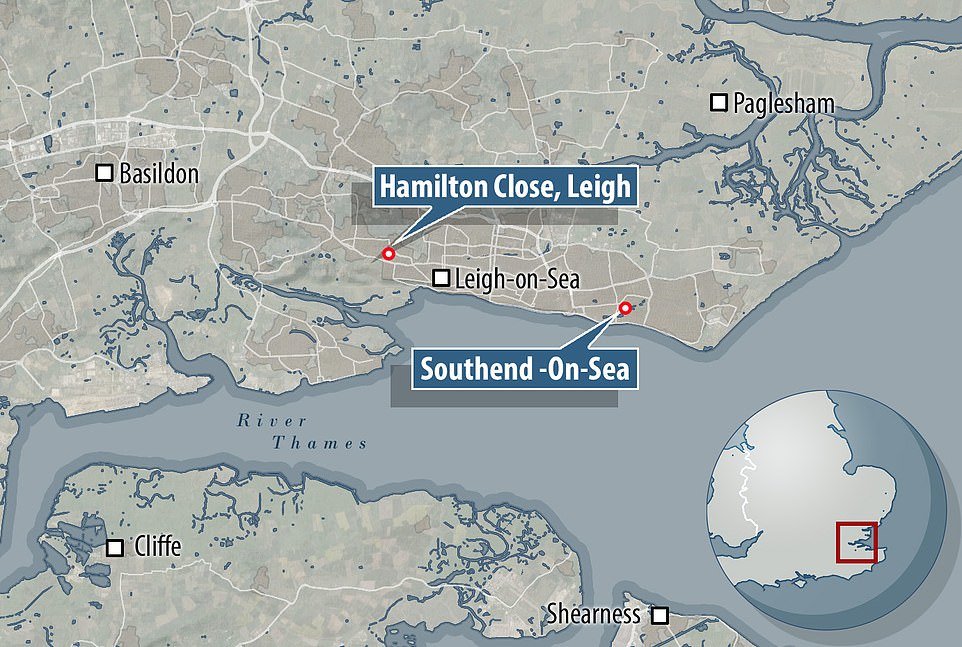 The divisison between Southend and Essex Councils has caused further problems in Hamilton Close in the village of Leigh, where one cul-de-sace is split down the middle. Resident Graham Bishop says even his garden straddles the border between the two authorities

It is the same for Amelia Burnett who lives in Southend, Essex, and has an invisible boundary running through her home and garden.

She is torn between whether to adhere to the stricter rules put in place by Essex Council, or opt for the less rigorous restrictions enforced by the borough of Southend-on-Sea, a separate local authority.

The mum-of-two, 41, told The Sun: 'There's no logic behind it, it's baffling. The Government doesn't seem to have a clue what it is doing. It is all as clear as bloody mud.'

The divisison between Southend and Essex has caused further problems in Hamilton Close in the village of Leigh, where one cul-de-sace is split down the middle.

Resident Graham Bishop says even his garden straddles the border between the two authorities.

The 80-year-old fears he will have different restrictions in place for different parts of his property.

Mr Bishop said: 'Does this mean I can have people in one part of my garden but not another if Essex moves up a tier?

'If it happens and I want to have a coffee with someone from up the road, I can invite them to mine but I can't go there.'

He also expressed concerns to the Halstead Gazette that residents would become trapped in the cul-de-sac as there is no way to exit the road without crossing the invisible border into tighter coronavirus restrictions.

He said: 'The people at the end of the road are trapped in the cul-de-sac if we end up with more restrictions, they have to go into Southend to get out.