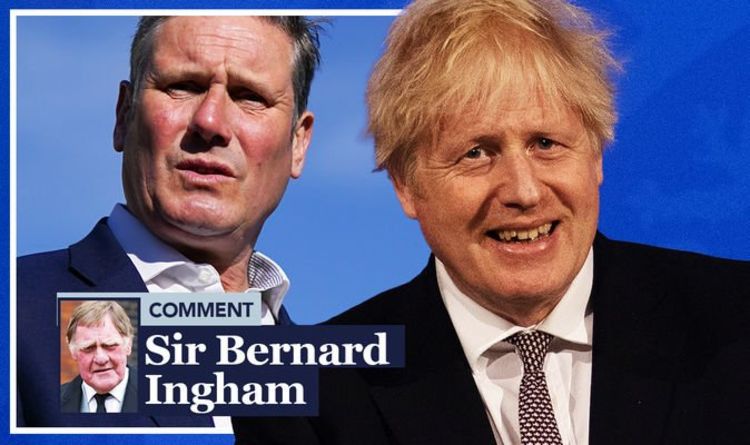 Britain becoming one-party state because Labour are so dreadful

I DON'T want to worry you, but have you noticed that, leaving aside the suicidal nationalists of the Celtic fringe, the UK is in danger of becoming a multi-party democracy but with only one that is electable - to wit, the Tories?

That is the uncomfortable conclusion to be drawn from the Hartlepool by-election and English local polls. It promises no good for the country or, indeed, the Tories. All governments need a strong alternative to keep their noses to the grindstone and self-indulgence at bay. It is, of course, true that the Tories are a broad church riddled with factions but its lust for power has kept it in government for 44 out of the 75 years since World War II.

In contrast, Labour has been fractious with the descendants of Methodism and Marx finding it hard to live together. Just think of the Bevanites, the unilateralist upheavals, the trade unions and the anti-Brexiteers preferring the essential socialism of the EU to self-governing independence. This raises the question whether Tory Remainers are in the right party.

On top of that it has acquired over its 31 years in office a reputation for financial incontinence, though never, it must be said, anywhere near as damaging to the national balance sheet as the Tories’ desperate and, to be fair, humanitarian handling of the Covid pandemic.

As if that wasn’t enough, it is seen as being ruled by a London metropolitan “elite” that had nothing in common with its bedrock – the horny-handed sons of toil – as demonstrated by the crumbling of the Red Wall in the North and Midlands.

That “elite” is a sucker for every wokery and political correctness of the indoctrinated (as distinct from educated) products of our universities.

Now Labour’s leader, Sir Keir Starmer, is gingerly and somewhat irresolutely trying to re-shuffle the party back to moderation after the mindless excesses of the Jeremy Corbyn era.

The odds are against him what with the unrepentant Corbynites and, as ever, his trade unions paymasters bent on class war whenever the opportunity arises.

Nor can he appeal to the party conference since, courtesy Ed MIliband’s introduction of a £3 membership fee, it is riddled with hard Left entryism.

Sir Keir must feel he is living in a cage hemmed in on all sides not just by an iron mesh but also by predators lurking above him and on all four sides.

No political party has, of course, the right to eternity. It has at least to seem relevant to the age in which it finds itself. But where is an alternative that has a sporting chance of succeeding Labour?

The Greens? Don’t make me laugh. They are merely green-washed socialists obsessed with climatic doom. The Liberals? Why do they still exist, except as a potential makeweight in a coalition? And after the obstructionism of Sir Nick Clegg in coalition with the Tories from 2010-15, only a fool would touch them.

And even the Monster Raving Loony Party can look more rational than the host of minorities telling us how we should lead our lives and mind our language.

Fancy our much-vaunted democracy being reduced to this. It is clear what is needed in any party that is going to be of any use to the British people – and the world.

1 - a plan for economic recovery, job creation and innovation and making a success of Brexit;

2 – holding the UK together in the face of the prevailing nationalist secessionism;

3 – social, managerial and behavioural reform across the board; and

4 – priming our defences against the threats from Russia, China, North Korea and Iran.

That summary puts Labour’s and Sir Keir’s plight in depressing perspective. It is why we are in danger of becoming a multi-party state with only one electable option.

But lying behind the essentials lies an opportunity waiting to be grasped. Our way of life is under threat from within. The right to demonstrate peacefully is ritually abused. Look at Manchester United fans’ violence in trying to rid themselves of the club’s American owners.

Knife crime among the youth is an appalling blot on Britain. Our children are under siege from drug gangs and the internet’s anti-social media is allowed to corrupt at will. Parental responsibility seems to be woefully lacking.

All this would outrage Labour’s pioneers whose ambition to liberate the ordinary folk was driven by self-improvement, discipline and personal responsibility.

If Labour could return to its motivating roots, it would put itself in the way of the perhaps inevitable reaction against today’s lawlessness and hedonism.. Just think of what followed 18th century debauchery: 19th century puritanism.

You may well consider there is not a cat in hell’s chance of Labour finding inspiration in its ancestors. If so, Britain is in a pickle. You have been warned.