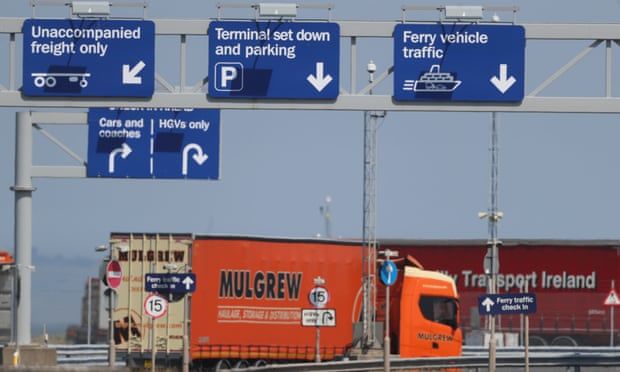 Brexit: why has row over Northern Ireland protocol resurfaced?

The UK is set for another bust-up with the EU over Brexit, testing the patience of European leaders trying to maintain a united front against Vladimir Putin.

What is the UK threatening, why now and what are the consequences?

The issue is the Northern Ireland protocol, signed by Boris Johnson in January 2020.

It is now threatening to derail the new Stormont power-sharing government after the Democratic Unionist party refused to appoint new ministers until the checks on the Irish Sea border on goods coming into Northern Ireland from Great Britain were scrapped.

What has happened now?

The UK foreign secretary, Liz Truss, issued a strongly worded and lengthy broadside against the EU late on Tuesday night criticising proposals it made last October to relax checks on goods crossing from Great Britain into Northern Ireland.

She said the proposals “would worsen the current trading arrangements and lead to everyday items disappearing from shelves” and lead to “other unacceptable burdens on business”.

And she warned that the UK “will not shy away from taking action to stabilise the situation in Northern Ireland if solutions cannot be found”.

She said Lincolnshire sausages and other chilled meats would need a veterinary certificate to enter Northern Ireland, sending a parcel to Northern Ireland would require more than 50 fields of information for customs declarations and there “would be powers to search people’s bags for food, like ham sandwiches, on departure from the ferry to Northern Ireland”.

She also said pet owners would need to pay £280 for certificates and jabs for their dogs or cats “just to go on holiday in the UK”.

And finally that VAT reliefs such as the recent energy saver could not be applied in Northern Ireland, “despite posing no risk to the EU single market”.

Haven’t we heard all this before?

Yes, most of it. Recall the row over the Great British banger?

Negotiations with the EU over the protocol are about to restart – or implode – if the UK goes ahead with a threat to table new laws, possibly as early as Tuesday next week, to disapply some of the protocol.

Yes. Truss also protested that composite foods such as “Thai green curry ready meals, New Zealand lamb and Brazilian pork” could disappear from the shelves if the protocol was applied in full.

Why is that interesting?

Remember the row about chlorinated chicken coming into the UK from the US? The Thai green curry example raises the same issue for the EU and goes to the heart of the protocol checks. They were agreed to ensure that third country goods – whether it was unregulated meat from South America or the US or counterfeit goods from China – could not slip into Ireland or the single market via Northern Ireland.

What does the EU say?

Last October the EU offered to scrap 80% of Northern Ireland food checks and 50% of customs checks in four discussion papers it called “far-reaching” and a “new model” for the protocol.

It also repeatedly offered a deal to eliminate food checks if the UK agreed to maintain equivalent food standards as the EU. This was rejected in the overall trade deal as it could have raised a barrier in trade deals with the US and other countries with different food standards. But the EU offered the UK a bespoke deal for Northern Ireland that would have resulted in physical checks on food scrapped under an equivalence deal which would be reviewed in the event of a US trade deal.

How did the UK react?

The then Brexit secretary, Lord Frost, claimed the “far-reaching” proposals were nothing of the sort – arguing the 50% reduction in customs checks was merely a reduction in 50% of the number of boxes vendors had to check when sending goods from Great Britain to Northern Ireland.

He also demanded the role of the European court of justice as the arbiter in any potential disputes was changed.

And he repeated a threat to take unilateral action to achieve his goals.

Now what – will the UK walk away?

Talks, stalled because of both the Ukraine war and the Northern Ireland assembly election, will resume.

But expect relations to get worse before they get better.

The UK is expected to unveil legislation next week to disapply some of the protocol.

What will the EU do if the UK walks away from the protocol?

The EU Brexit, chief Maroš Šefčovič, issued a blunt statement on Tuesday warning the protocol was a “cornerstone” of the wider withdrawal agreement and “its renegotiation is not an option”. If the UK does go for the nuclear option and disapply the protocol completely, the EU has promised swift and decisive action.

These could range from limited sanctions on emblematic British goods such as Scottish salmon and whisky or suspension of the entire trade and cooperation deal.

The UK knows the EU has no appetite for a row given the situation in Ukraine but the legal ground work for a trade war was undertaken last November when Frost threatened to walk away.